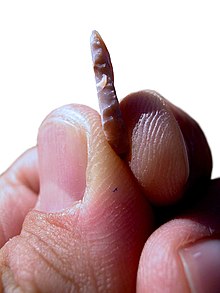 Microliths (from ancient Greek μικρός mikrós , German 'small' and λιθος líthos 'stone') are very small Stone Age blades or points up to 3 cm in size. They were made by carefully breaking and then retouching small stone blades. The raw materials used were easily fissile pebbles such as flint or volcanic glass such as obsidian .

Microliths are typical of the Epipalaeolithic , Mesolithic and Neolithic ; they still occur into the Bronze Age . The internal chronology of the Mesolithic is primarily based on the changing frequencies of microlithic types. In Europe, a distinction is made primarily between the older non-geometric microliths and the younger geometric variants. 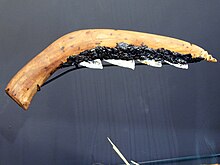 Microliths suggest the invention of the bow and arrow . They were initially used for lances, spears and harpoons as sharp inserts (sometimes as side barbs) and for arrows as simple arrowheads. In the late Mesolithic, trapezoidal microliths with wide edges were mainly used for arrows , which, when used as cross-cutters, caused larger and more heavily bleeding wounds.

In the Neolithic , microliths were also used as fine burins and, as composite tools , as knives, saws and sickles. They were fastened in a groove in a wooden or bone shaft with birch pitch . They thus formed a coherent edge.

In parts of Turkey, microliths have been used to make threshing sleds .

After it was previously assumed that microliths were a late development of the Paleolithic , we now know that they were found in almost all Stone Age cultural complexes, even if the number fluctuated from site to site. The reason for this change in the history of research was the fact that they were previously neglected or overlooked due to crude excavation methods.

In Africa, microliths are typical of the African Later Stone Age , where they first appeared 40,000-20,000 years ago and probably developed from the knock-off techniques of the Middle Stone Age . From southern Africa, several sites with about 65,000 year old deposits are known, which is called Howieson's Poort. It is characterized by devices that, apart from their size, correspond to the microliths of later phases. It is always only a few thousand years before the large microliths disappear again.

They occur in South Africa around 40,000 years ago. They are particularly common in North African Capsia (9000–3000 BC). In sub-Saharan Africa, however, there are also microliths that are somewhat larger and significantly older. The microliths of Howieson's Poort industry are about 95,000-80,000 years old (70,000-60,000 according to another Cambridge History of Africa dating), and in Zaire an uninterrupted series of microlithic industries in the Matupi cave go back 32,000 to 40,000 years.

In Europe, too, microliths can already be found together with hand ax complexes (e.g. Tautavel ), where they do not, however, develop proper microlithic industries, but are viewed as a processing aspect of the classic Acheuleans , as in Africa . There is no clear interpretation of this finding, but it is noticeable that the corresponding Old Paleolithic stations in Europe are almost always long-term or frequently visited places that had served as central camps, where large-scale activities were carried out small stone tools were required or simply useful. In addition, there could have been a decreasing supply of raw materials from Silex , for example , which inevitably had to appear in such places over time. The same applies to the many Middle Paleolithic sites in Europe, where small cuts used exceed the number of larger tools such as scrapers and knives that have been worked out many times over.

In their elaborate, classical variety of forms, microliths and now clearly identifiable industries appear above all since the Aurignacia (at the earliest 45,000 to 25,000 or 15,000 BP ) but especially in the late Magdalenian (approx. 17,000–11,000 BP = years before the present: B efore P resent) of the Upper Paleolithic . They existed in southern Russia 25,000 years ago and in northern Germany 13,000 years ago. Above all, they can be found in the European Mesolithic , where the microlithic industries in Northern Europe are divided into three periods: the Maglemose culture (approx. 8000–5600 BP), the Congemosis culture (7600-6500 BP) and the Ertebølle culture ( 6500-5200 BP). Trapeze are also still made in the funnel cup culture.

Microliths appear on the North American continent at the end of the Paleo-Indian and the beginning of the Archaic period . They were of particular importance in the arctic regions , especially the cultures of the Eskimos and Aleutians of arctic stage III. There is a strong microblade industry there. Stage III split between 2500 and 1900 BC. From Paleo-Indian stage II onwards, the Eskimos became the determining element in the north instead of the Paleo-Indians. This Arctic small appliance industry primarily includes sophisticated microblades that were used as cutting edges for bone, ivory and wooden implements assembled from several parts. As anthropological findings from the Aleutians suggest, the cultural tradition could well have had its roots in eastern Siberia and quickly expanded to Greenland. Several sub-types emerged from the Arctic small-device tradition during the expansion to the east: above all the Independence I culture (Canada and Greenland), the pre-Dorset culture (Canada) and the Sarqaq culture in Greenland.

In addition, microliths are characteristic of the Poverty Point culture on the lower reaches of the Mississippi River at the end of the Archaic Period.

In the Upper Paleolithic, microliths have even been found in northern China for Homo erectus , which remained there until around 40,000 to 10,000 years ago, as more recent anthropological findings show and which was previously not believed to have such complex fine motor skills, especially since its device complexes are otherwise relatively large and rather coarse and mostly in nuclear technology and not in reduction technique are made. The microlithic finds are particularly numerous in this context and number in the thousands at many sites, but also show a large regional and temporal range of variation.

In the rest of East and Central Asia, too, numerous microlithic tools can be found in the late Paleolithic and Neolithic, mostly of the blade type, which are rarely retouched. In Siberia, Mongolia and Manchuria, they apparently existed for a particularly long time, deep into the local Neolithic. With the beginning of ceramics and stone grinding around 3000 BC. In these areas this device tradition comes to an end.

From around 4000 BC Geometric microliths appear on Sulawesi (Celebes).

The Australian small tool tradition dates back to between 4000 and 3000 BC. For example, geometric microliths were found in the Kenniff Cave in Carnarvon National Park in Queensland, which can be stratigraphically identified based on the sequence of layers from 5000 to 2500 BC. Could date. 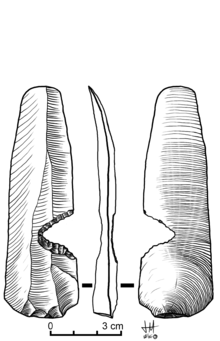 Manufacture of geometric microliths (triangle, trapezoid, segment), depending on whether the proximal or distal end of the starting material is used.

Microliths were created by deliberately breaking very small blades (micro blades , lamellae). Lateral notches on a micro-blade break it in a targeted manner (notch breaking technique). A notch (micro-graver) remains as a typical piece of waste. Such notch remains are found in North Africa, especially in Ibéromaurusia (15,500–12,000 BP). In Europe, they are found to be rather random residual product already in the Gravettian or the simultaneous Pavlovian (Czech Republic) (26,000 to 19,000 BP).

By final retouching the broken pieces were brought into the desired shape.

According to the shape, one differentiates between triangular, square, segments and trapezoids. Trapeze are geometric microliths, both ends of which are separated by retouching; with more or less parallel unretouched edges. There are clear regional differences in the forms.

Youtube: Microblade Microburin Microlith on Kanal Blattspitze shows the production of microliths with the Levallois technique.