The acrylamide belongs to the chemical group of amides . In its pure form, it is a white, odorless, crystalline powder that is soluble in water, ethanol, and ether .

The targeted chemical synthesis of acrylamide takes place by hydrolysis of acrylonitrile with copper catalysts or by enzymatic hydrolysis:

The development of starchy foods as a result of the Maillard reaction when they are strongly heated has no preparative significance.

Acrylamide is used to make polymers and dyes . Uncrosslinked (co) polymers of acrylamide are mostly water-soluble and are used as stabilizers or flocculants in many applications, for example in wastewater treatment or paper production. Cross-linked polyacrylamides are not soluble and only swell in water; they are used as a carrier material for gel electrophoresis ( SDS-PAGE ) and as a thickener in cosmetics. Cross-linked copolymers of acrylamide and acrylic acid are used as superabsorbents , e.g. B. in diapers.

Details on the influence of acrylamide on the human metabolism are still largely unexplored. Two modes of action are known from animal experiments: On the one hand, acrylamide directly attacks the DNA , and on the other hand, it is converted into glycidamide by liver enzymes . A strong genotoxic effect is ascribed to this reactive substance . Both acrylamide and glycidamide form compounds with amino acids and nucleobases and can thus change the structure and function of, for example, DNA and hemoglobin . In animal experiments, the transmission of the mutagenic effect to daughter generations was also observed.

The classification as carcinogenic is based on studies with high doses of acrylamide in rats and mice. Despite years of research, there are no clear epidemiological results for an increased cancer risk in humans. On the contrary: A study from 2003 found no increased cancer risk (“ no measurable impact ”); the risk of colon cancer actually decreased with increasing acrylamide content in the diet. It should also be noted here that only acrylamide that has entered the bloodstream is relevant; Studies suggest that dietary acrylamide rarely increases blood levels.

Since June 2000, acrylamide has been repeatedly detected by Swedish scientists in various foods (especially in starchy and overheated foods such as French fries ).

According to a study by the Hannover Medical School, only people who eat French fries or potato chips several times a week have an elevated acrylamide level in the blood. However, this is "low and not significant from a scientific point of view." However, smokers were significantly more exposed. From the results it was concluded that not only the diet, but "possibly also the body's own breakdown processes of proteins contribute to acrylamide getting into our bloodstream."

Maillard reaction from asparagine to acrylamide

It is produced in the Maillard reaction when starch is overheated , especially when baking , roasting , roasting , grilling and deep-frying . Accordingly, humans have been taking acrylamide in more or less small doses with their food since they started heating their food. The most important raw material for acrylamide in food is the amino acid asparagine , which is mainly found in potatoes and cereals . The formation of acrylamide is promoted by sugars such as fructose and glucose . 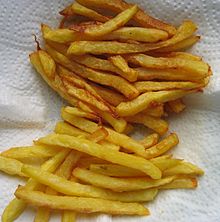 During the production of French fries, excessively high temperatures can produce acrylamide

A particularly large amount of acrylamide is formed when foods containing potatoes and cereals are heated dry to over 180 ° C. A detectable formation of acrylamide begins at 120 ° C and increases sharply at temperatures of 170–180 ° C that are occasionally reached during roasting and baking processes. The outer dry layers or bread crusts also contain significantly higher amounts of acrylamide than the non-browned inner areas. The same applies to roasted foods such as coffee , crispbread and rusks . If potatoes are stored below 4 ° C, the fructose content can increase significantly, which leads to higher acrylamide formation during later frying and deep-frying.

A completely acrylamide-free diet without giving up dry, heated food is currently not technically possible. A limit value has not been set for food due to a lack of knowledge about the health effects in humans. However, signal values ​​are determined annually by the Federal Office for Consumer Protection and Food Safety , on the basis of which the competent authorities of the federal states enter into a dialogue with manufacturers of particularly highly contaminated products to minimize the values. In the case of potato chips, for example, this signal value is 1,000 micrograms per kilogram . In a test by the journal Ökotest , one of 28 products tested was above the signal value for acrylamide.

It is possible to reduce the formation of acrylamide by changing recipes and manufacturing processes. In many cases, lowering the maximum baking temperature by 10–20 ° C or replacing or dispensing with individual ingredients can reduce the formation of acrylamide. The Bavarian State Office for Health and Food Safety has identified a high proportion of almonds and, above all, the raising agent ammonium hydrogen carbonate (formerly: ammonium bicarbonate, also: deer horn salt ) as the main source of gingerbread . After omitting the almonds and using baking soda (sodium hydrogen carbonate, formerly: sodium bicarbonate) in combination with disodium dihydrogen diphosphate and dicalcium phosphate as the leavening agent, the acrylamide content fell to a tenth of the previous value. However, these measures can (in some cases to a considerable extent) have a negative effect on the quality, in particular the aroma and consistency, of the food.

In addition to these measures to reduce acrylamide formation (optimized raw material selection and treatment as well as changing existing process steps ), the development of new process technologies is also conceivable, for example the use of vacuum deep-frying technology in potato chip production .

Minimizing acrylamide in potato chips and other foods

Since the acrylamide problem first became known, the German potato chips industry has acted in the interests of preventive consumer health protection and started monitoring acrylamide levels. For this purpose, systematic analyzes were carried out in the association's own institute LCI for the member companies of the Federal Association of the German Confectionery Industry ( BDSI ).

The LCI publishes the weekly acrylamide mean values ​​of the potato chip manufacturers producing in Germany in the form of a so-called weekly mean values ​​graph, which shows the effectiveness of the minimization measures implemented since April 2002. This graphic shows the weekly mean values ​​from April 2002 to the end of March 2017 and based on almost 33,000 acrylamide analyzes systematically carried out by the LCI for the BDSI member companies producing potato chips . Also in other food groups, such as B. the fine bakery products could be achieved in particular through recipe changes and the targeted use of the enzyme asparaginase acrylamide minimization.

Since April 11, 2018, food manufacturers as well as restaurants and snack bars have had to apply the procedures laid down in Regulation (EU) 2017/2158 to contain acrylamide in certain foods. These procedures relate to the selection of raw materials and their storage, the preparation of the food and control procedures to be set up by the manufacturer. In addition, appropriate labeling is provided for these foods, which are prepared by the end user, as well as a very detailed procedure for sampling and preparation. Simplified requirements apply to small businesses that also operate retail businesses (e.g. bakeries, snack bars). The regulation does not contain any sanctioning provision. It is therefore up to the individual EU states to enforce compliance with the provisions with penal provisions.

Acrylamide has marked acute oral toxicity. Appropriate precautionary measures must be observed when handling the substance commercially. Similar regulations apply to transport, with the substance being identified by UN number 2074.

Although the International Agency for Research on Cancer stated in 1994 that there was insufficient evidence for acrylamide to be carcinogenic to humans, acrylamide was classified as likely carcinogenic based on laboratory tests in rats and mice .

The Federal Institute for Risk Assessment states that

"A) due to these inconsistent results of the studies included in the assessment, it can neither be assumed nor excluded that there are causal relationships between acrylamide intake and cancer development in humans."

“B) In this context, it should be noted that epidemiologically no clear connection between cancer and acrylamide exposure could be demonstrated so far. It is possible that the risk of cancer development - if present in humans - is practically hardly detectable at the given exposure. "

The European Food Safety Authority (EFSA) published a scientific opinion on acrylamide in food in June 2015. Accordingly, animal studies provide evidence of a genotoxic and carcinogenic effect. Evidence from human studies that current exposure causes cancer is currently limited and inconclusive. As acrylamide is found in a wide variety of everyday foods, this health problem affects all consumers, with children (based on their body weight) being the most exposed age group. The foods with the largest contribution to acrylamide exposure are deep-fried potato products, coffee, cookies, crackers, crisp bread and toasted bread.

A study published in the British Journal of Cancer in 2003 concluded that dietary acrylamide does not significantly increase the risk of cancer in humans and that the risk of colon cancer is even slightly lower in people who consume acrylamide-containing foods.

In 2015, a meta-study on acrylamide and the risk of cancer was published at the Mario Negri Institute for Pharmacological Research in Milan , which evaluated 32 studies on the subject. The result of this meta-study is: "The systematic review and meta-analysis of epidemiological studies shows that acrylamide is not related to the risk of the most common cancers."

The BfR acrylamide calculation program of the Federal Institute for Risk Assessment enables an approximate calculation of the individually absorbed dose when entering the eating habits.