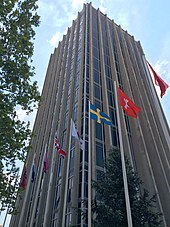 The main task of the IARC is to lead and coordinate research into the causes of cancer . The IARC conducts a number of global epidemiological studies on cancer. Scientific prevention strategies are also being developed. The IARC publishes a number of monographs on cancer risks, which are prepared in accordance with the IARC preamble . To date, 112 volumes have been published (as of March 2015), with monographs from the last 20 years being available online. The works include exposures (including work-related) to various chemicals (e.g. formaldehyde , lead compounds , glyphosate ), physical influences (e.g. ionizing radiation , effects in the context of electromagnetic environmental compatibility ), biological pathogens ( e.g. Helicobacter pylori , Epstein-Barr virus ) and Lifestyle-related factors (for example: tobacco use , ethanol consumption , sunbathing ).

The IARC identifies hazards in its monographs . This means assessing the potential of a particular substance to cause harm. The monographs are then used in the context of risk assessments, which incorporate other factors such as socio-economic aspects or national priorities. Therefore, the IARC does not make any recommendations with regard to national legislation. The assessment of the risk , i.e. the probability that a harmful effect of a chemical will occur, is the responsibility of the bodies entrusted with risk assessments.

Since 1971, 980 active substances and influencing variables have been examined, 116 of which were identified as carcinogenic (group 1) and 360 as potentially carcinogenic (groups 2A and 2B) for humans. The list of these factors is available online.

The IARC participates in the definition of disease names and classifications in the field of tumor diseases and, together with the WHO, publishes the book series WHO Classification of Tumors - WHO classification of tumors . These volumes are each based on consensus meetings of recognized international experts and try to standardize diverging classification systems.

Head of the IARC

Christopher Wild has been Director at the IARC since January 2009 .

More information about the IARC

IARC goes back to an initiative by leading French public figures who moved Charles de Gaulle to set up a cancer research institute that became part of the WHO in 1965. IARC today has 25 member countries.

Approx. 300 employees from around 50 countries work at the IARC headquarters in Lyon, with many visiting scholars and interns being employed every year. The biennial budget for 2014/2015 is around EUR 40 million. In addition, an average of EUR 13 million is raised for individual research projects each year.