Santonin (santoninic anhydride) is the active component of the so-called worm seed , from which it is manufactured in the factory. Santonin forms shiny, white, tabular crystals that are odorless and tasteless, but taste strongly bitter in alcoholic solution.

The substance was discovered in 1830 by Kahler in Düsseldorf and Joachim August Alms (1803–1847) in Penzlin . In the USA, santonin was the first commercially successful medicinal substance from Pfizer . 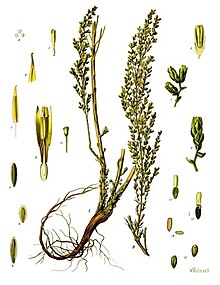 Santonin is contained in worm seeds ( Artemisia cina , lemon blossom) and can be obtained by extraction with dilute milk of lime and precipitation with dilute hydrochloric acid . Resin also deposited is removed from hot ammoniacal water.

The melting point is 174 ° C. In water the Santonin is sparingly soluble, opposite litmus it has no effect. From a chemical point of view, it is the lactone of the monoprotonic santoninic acid (C 15 H 20 O 4 ) and has the formula C 15 H 18 O 3 .

By boiling santoninsaurem barium with barium hydroxide is a new, but isomeric acid Santo acid . In scattered daylight, faster in direct sunlight, the santonin turns yellow and must therefore be stored in black glasses in the dark. Its acid, santonic acid, on the other hand, does not change color in sunlight.

Hermann Trommsdorff's observation that crystals of Santonin burst in sunlight in 1834 was an early result of photochemistry .

Like santonin acid sodium, santonin was previously used against roundworms , but is no longer used because of its toxicity. Even 2-3 times the daily dose (100 mg for adults) can cause symptoms of poisoning, which are initially expressed in purple then yellow vision; cramps and diarrhea can also occur. However, damage to the optic nerve has also been observed after prolonged use of therapeutic doses.