The pumpkin-like (Cucurbitales) are an order of the flowering plants (Magnoliopsida). You belong to eight families. Many well-known and economically important plant species can be found especially among the cucurbitaceae .

The taxa of the order are morphologically very diverse. The pumpkin-like include trees and shrubs as well as herbaceous plants . The leaf margin is usually entire, less often serrated. The presence of stipules is considered original within the order; they are absent in the cucurbits, Datiscaceae, Tetramelaceae and Apodanthaceae.

The sex systems are very diverse within the order. Originally within the order are hermaphrodite flowers , such as those found in the Corynocarpaceae, Coriariaceae, Anisophylleaceae and Apodanthaceae. In the last three families, however, there are also monoecious species. The Begoniaceae are purely monoecious. The remaining families are primarily dioecious ( dioecious ), but monoecious and other systems have formed secondary to the Cucurbitaceae. In general, the sexual systems within the order are considered unstable and can easily switch from one to the other.

The bloom is usually differentiated into calyx and crown , the bloom are not overgrown apart from the cucurbits.

The ovary is below, only above in Coriariaceae and Corynocarpaceae. These two families also show apical placentation of the single ovule per ovary , while the remaining families show parietal placentation.

The core group of the pumpkin-like (Begoniaceae, Datiscaceae, Tetramelaceae, Cucurbitaceae) predominantly have the following flower characteristics: the anthers are attached to the stamen at the base (basifix), the pollen sacs sit laterally (latrors) or pointing outwards (extrors); the pistil consists of three carpels; the ovules sit parietally in the ovary . Important trends are a two-cell inner integument and the lack of tannic tissue in the flowers.

The fruits are very variable: there are drupes and samaras in the Anisophylleaceae, drupes in the Corynocarpaceae, armored berries (Cucurbitaceae) and capsule fruits in the other families. The core group has many seeds per fruit, while the Anisophyllaceae, Corynocarpaceae and Coriariaceae form one seed per fruit. The latter is considered original within the order.

The Cucurbitales are distributed worldwide, but with a focus on the tropical and subtropical areas. 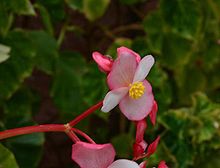 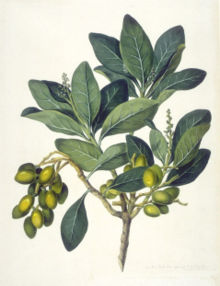 The exact position of the pumpkin-like within the Rosids has not yet been finally clarified; at least they form a group with the beech-like (Fagales), butterfly-like (Fabales) and rose-like (Rosales), the relationships within this group are still unclear. She saw various works as sister taxon of the Fagales, others in turn as sister taxon (Fagales + Rosales + Fabales), or even as sister taxon of Zygophyllales .

The pumpkin-like order itself is monophyletic . The individual families differ significantly in their number of species: the Cucurbitaceae and Begoniaceae include around 800 and 1400 species, respectively, while the Anisophylleaceae only contain 30 to 40 species, the other families between two and 19 species.

The order includes the following eight families with a total of 131 genera and almost 2300 species:

According to Zhang et al. (2006) the following cladogram results for the relationships within the orders , in which, however, the Apodanthaceae are not included, as their affiliation to the Cucurbitales was only clarified in 2010:

Phylogenetic studies of the systematic position of parasitic plants have shown that the Apodanthaceae family , which up to now has not been assigned to any subgroup within the Rosopsida ( incertae sedis ), belong to the Cucurbitales. That is why Peter Stevens has now placed them with the Cucurbitales.

The oldest fossils are seeds of cucurbits from the Upper Paleocene and Lower Eocene of the London clay at an age of around 65 million years. Further fossil finds come from the Upper Oligocene of France (around 34 million years ago ), which depict Coriaria- like flower branches.

The Cucurbitales order was drawn up in 1829 by Barthélemy Charles Joseph Dumortier . For a long time it only comprised the Cucurbitaceae family. Later the Begoniaceae and the Datiscaceae (including Tetramelaceae) were added. The relationship of this core group (Begoniaceae, Cucurbitaceae, Datiscaceae and Tetramelaceae) has already been recognized on the basis of morphological studies. In total, the seven families were placed in 17 different orders in the various systems in the past.

Since the relationship of the other families is not expressed in common morphological or anatomical features, the current scope of the order was only recorded in the 1990s by means of DNA sequence comparisons. The current seven families were then assigned to the Cucurbitales in both publications of the Angiosperm Phylogeny Group .

Economically significant plants can only be found among the cucurbits, which include a number of useful plants. The commercially important are garden pumpkin ( Cucurbita pepo ), melon ( Cucumis melo ), cucumber ( Cucumis sativus ) and watermelon ( Citrullus lanatus ). Many species and hybrids of the begonia ( Begonia ) are widespread ornamental plants. Datisca cannabina is a historic Dye plant , with the silk was dyed yellow. Tetrameles nudiflora is an important timber in Southeast Asia.