Under Pickling refers to cooking the insertion or rubbing of a food. Mostly raw meat or fish are pickled to add flavor, to remove flavor or to make the product durable. A distinction is made between a dry and a wet stain. Vegetables can also be pickled, which is actually referred to as marinating after cooking, such as with Italian antipasti vegetables. As a rule, the stain is then discarded.

Applications and modes of action 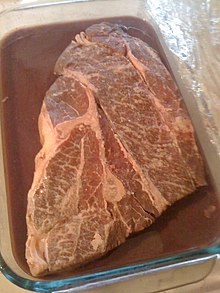 Pickling a raw roast beef by marinating it in red wine

There are two types of pickling to give an aroma that should be emphasized after the cooking process.

The dry stain consists of a mixture of mainly salt and various spices. Here, for example, a steak is rubbed in some time before roasting to make it more tender (softer). Dry ham products are also flavored or cured by pickling and usually then smoked or air-dried.

A dry stain is also applied to Scandinavian gravlax , which is washed off after a few days and replaced with chopped dill tips. This removes water from the salmon fillet and makes the product durable.

A wet stain is used in the kitchen for game meat, for example, in order to reduce a possible “ skin gout ”, which can be very strong if game is too warm or hung for too long. For example, soaking in buttermilk is a widely used variant. But no salt is used, as the meat would otherwise become tough when cooked.

Another variant of the wet stain is used in butcher shops. Here, a so-called curing lake is injected into the ham, which is responsible for the reddening of the ham during the cooking process. Flavors and spices are also added to the brine here, which then go into the ham.

Sauerbraten is placed in a pickle containing vinegar for several days before cooking, Barbarie duck roast can be pickled with soy sauce and orange juice overnight.

When pickling or marinating vegetables, a high-quality, cold-pressed olive oil with flavors such as marjoram, oregano, thyme or a little vinegar is usually used. Here, the vegetables are marinated after cooking, not like with meat before.