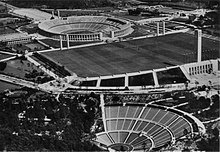 Historical aerial view of the Olympic site, with the Maifeld in the middle

Olympic polo tournament on the Maifeld (1936)

Location of the Maifeld on the Berlin Olympic site

The Maifeld in the Westend district of Berlin is a large sports turf area immediately west of the Olympic Stadium with a grandstand extending from the bell tower . It is one of the largest enclosed and not publicly accessible lawns in the State of Berlin and is managed by the Olympiapark Berlin .

Use in the time of National Socialism

The Maifeld was completed in 1936 and was intended by the National Socialists as a place for the May marches and other propaganda events.

During Mussolini's visit to Germany on September 28, 1937, Joseph Goebbels spoke on the Maifeld.

Statue Deutsche Nike by Willy Meller (1936) on the Olympic site in Berlin; in the background the 36 meter high Friesian, Saxony, Franconian and Swabian towers facing the Maifeld

The Maifeld is 112,000 m² and was designed for up to 250,000 visitors. The grandstands again offer space for 60,000 spectators. It was part of the realm sports field of the 1936 Summer Olympics . During the 1936 Summer Games, polo competitions and dressage competitions for riders as well as a demonstration by 20,000 Berlin school children took place on the Maifeld.

The Maifeld was only rarely used by the National Socialists for large-scale parades, for which it was originally designed. It made its grand entrance when Mussolini visited Germany in September 1937. On September 28th Goebbels , Hitler and Mussolini spoke (in German) to a huge audience on the Maifeld. Hitler himself mentioned the number of one million in his speech, today's authors give numbers of around 700,000 participants in the mass rally.

Use by the British Armed Forces

From 1953 to 1994 it was part of the headquarters of the British Armed Forces in Berlin, which was protected by forces of the 248 German Security Unit . Up until 1994 the annual birthday parades of the British troops for Queen Elizabeth II took place here - attended by thousands of Berliners . The Maifeld belonged to the area of ​​the British troops , who held cricket , rugby , polo and other competitions here. There have also been several rock concerts here, for example by Genesis , Pink Floyd and Tina Turner .

Use for sporting events 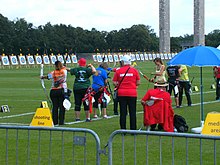 Bell tower Berlin / exit Maifeld: View of the archers on the Maifeld

After the withdrawal of the British troops, changing sports tournaments, in particular football games and polo, as well as other major events, take place on the Maifeld . If necessary, the Maifeld is regularly used as a logistics area to expand the capacities of the Olympic Stadium, for example during the 2006 World Cup for the provisional press center (tent city) and for additional VIP areas at the annual DFB Cup final .

Until the middle of the 2005/2006 season, the Jewish Berlin state league club TuS Makkabi Berlin played its home games on part of the lawn. In 2008 the Berlin Crocodiles , a team of the Australian Football League Germany, played their home games on the Maifeld. Since 2012, the Maifeld has primarily served as a venue for the Berlin cricket clubs.

Since 2012 the volunteers of the Berliner Rugby Club 1926 e. V. (BRC 1926) organizes the international Fritz Feyerherm rugby tournament every autumn . It is a two-day event for rugby youth teams from all over Germany and Europe, which takes place on the Maifeld.

On March 21, 2013, there was an aircraft accident during a large-scale exercise in which two police helicopters collided on the Maifeld, resulting in one fatality and several injuries.

Every year in September the Maifeld is the venue for the international fireworks championship Pyronale .

Competition venues for the 1936 Summer Olympics