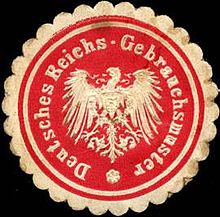 The utility model is the “little brother” of the patent and a property right of industrial property protection . The differences to the patent have become smaller with the latest changes to the Utility Model Act (GebrMG). At the end of 2017, 81,001 utility models were in force in Germany, and 13,299 new registrations were made this year.

Trademark thymodrosin from 1919 from the supplement to the German Reichsanzeiger

DRGM stethoscope according to Dr. Kronheimer, with the note "Novelty!"

As a result of increasing industrialization and the increased movement of goods, but above all in the course of increasing economic interests at national level, after the establishment of the empire , similar to a law on the protection of designs (1876), the decree of the protection of utility models arose. An imperial law of June 1, 1891 created the legal prerequisites for the German Empire, so that on October 1, 1891 the Imperial Patent Office introduced the "German Empire utility model". Numerous products were labeled “ DRGM ” between 1891 and around 1945 , often with the addition of the sample number, which today allows the creation time of some materially traditional historical devices to be narrowed down to a certain decade. Even a few years after the Second World War, this marking was occasionally still common in West Germany. After the establishment of the Federal Republic of Germany, the abbreviation was "DBGM" (German Federal Utility Model).

The protection requirements for utility models are similar to those for patents. A utility model can protect commercially applicable inventions in Germany and Austria that are new and based on an inventive step (DE: § 1 Paragraph 1 GebrMG; AT: § 1 Paragraph 1 GMG). Switzerland has no utility model protection. In the other European countries, institutes corresponding to the utility model are particularly important in Spain, but are planned in numerous other countries, some with requirements such as those for patents (France, Belgium, Hungary), some more or less deviating. In the Netherlands, the so-called six-year patent expires because it does not offer the applicant enough legal security .

When it comes to the requirement of "novelty" there are differences to the patent :

An invention is new within the meaning of the GebrMG if it is not yet known from the prior art at the time the utility model is registered. In contrast to the PatG in this sense, however, only what is known in writing or has already been used in Germany (DE: § 3 Paragraph 1 GebrMG; deviating AT: § 3 Paragraph 1 GMG: also verbal descriptions, no limitation to the inner country).

In addition, publications that have been made by the inventor or his legal successor up to 6 months prior to the registration (grace period for novelty; DE: § 3 para. 1 sentence 3 GebrMG; AT: § 3 para. 4 no . 1 GMG). In addition, an " exhibition priority " can be claimed in Germany for a registration within six months after an exhibition at a recognized trade fair (published in the Federal Law Gazette) , so that when assessing the protectability of the utility model, all publications that were published on the day of the exhibition priority or afterwards, are disregarded.

In Austria, this was initially seen differently (according to the Supreme Court ( OGH ) in its decisions “ Dart machine ” from 1996, “sliding layer cooler ” from 2003 and “wooden cover” from July 12, 2006 (in ÖBl. 2007, 76 , 78 f.) And the Supreme Patent and Trademark Senate in Patentblatt 2007, 88 “Gong”; Beetz: On the quality of inventions in utility model law , ÖBl. 2007, 148). In the decision “telescopic boom”, however, the Supreme Patent and Trademark Senate agreed with the decision of the BGH in “demonstration cabinet”, so that in Austria there is no difference between the “inventive step” and the “inventive step”.

As with patents , utility models usually have commercial applicability. The requirements for commercial applicability are the same as those of the patent and are largely standardized in Europe. It is only in the case of medical treatment procedures that there is often no commercial applicability, since the doctor's actions during his professional practice are not regarded as commercial. In addition, the private or highly personal use of a process is not commercially applicable. This applies to the practice of religion and the like, for example.

In contrast to patent law, in Germany (unlike in Austria) procedures cannot be protected by utility models. However, the case law of the last few years has seen the term “procedure” narrow. In addition, biotechnological inventions are now completely excluded from protection in Germany, in Austria only the protection of plants, animals and biological material as well as processes for their breeding and processes for the surgical or therapeutic treatment of humans and diagnostic procedures on humans ( Section 2 GMG ).

The term of protection of utility models is initially three years. In most countries it can be extended to a maximum of ten years.

The patent and trademark office does not check the factual requirements of a utility model in Germany. If the formal criteria are met, the utility model is usually entered in the utility model register (Section 8 GebrMG). Only for items that are obviously not subject to utility model protection, e.g. B. Procedure, there is no entry. This results in a quick registration process, so that the owner can assert rights from the utility model very quickly without having to wait for a possibly lengthy patent granting process.

A professional, d. H. Utility model applications filed by a patent attorney are usually entered in the utility model register within about three months. In comparison, the DPMA prepares a first, factual notification of a patent application after about eight months, so that it usually takes at least 18 months before it is granted. In Austria, the documents (preliminary notices) of the specialist departments lie on average one month before they are released and sent out by post.

The deletion procedure can be initiated in Germany by anyone by submitting an application to the German Patent and Trademark Office (DPMA) to delete a utility model. Thus, in contrast to a patent, there is a twofold defense against a utility model ( civil courts on the one hand, DPMA and Federal Patent Court on the other). In Austria, nullity proceedings against utility models take place before the nullity department of the Austrian Patent Office with appeal to the Higher Regional Court (OLG) Vienna .

The protective effect is essentially the same as that of the patent.

In some cases, however, certain protective effects are denied because utility models, unlike patents, have not been examined. In the Austrian customs procedure, goods from an infringer can only be stopped if a patent has been granted, but not if a utility model is registered.

In Austria it has been possible since 1994 to register program logic as a utility model, whereby only a formal examination is carried out for utility models. According to the official explanations, this should enable the idea of ​​a solution that is manifested by the program logic to be protected.