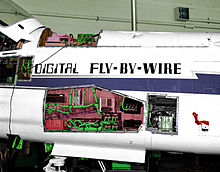 Fly-by-Wire [ ˌflaɪbaɪˈwaɪɹ ], FBW, analogously flying by cable (electrical) or electronic aircraft control, is a signal transmission technology for the flight control of aircraft .

As a rule, it is assumed that the control commands transmitted by wire come from a flight computer ( autopilot ). This gives the pilot additional support and frees them from routine tasks.

The pilot's inputs to the control elements (e.g. on the sidestick ) are converted into electrical signals during fly-by-wire, which are then converted back into movements of the control surfaces by servo motors or hydraulic cylinders that are controlled by electrical valves.

The main difference between fly-by-wire and servo-assisted systems (such as power steering in cars) is the complete mechanical decoupling of control element ( joystick ) and servomotor. The control signals are transmitted purely electrically.

An extension of the fly-by-wire concept is to let the control signals run through a flight control computer before they are executed , which can check them for plausibility , for example , and monitor compliance with certain limit values ​​so that the machine does not crash or break apart (for example due to excessive positive or negative g-forces , speeds or angles of attack ). The automatic monitoring and restriction of the control commands is called Flight Envelope Protection in English (see also tax limit and tax reserve ).

The development of such systems began when servo actuators were seen as a way of replacing the complex and difficult-to-maintain rods, cable systems and hydraulics with lighter electrical systems. The pioneering work for this was done with missile systems that consistently had electrical guidance systems.

On August 30, 1952, a prototype of the Avro Vulcan took off on its maiden flight. The military jet was the first aircraft to use a full fly-by-wire system. The servo valves of the positioning systems were controlled with analog electrical signals.

In the civilian sector, the Concorde was the first aircraft to be equipped with an analog fly-by-wire control system.

On May 25, 1972, NASA launched a modified Vought F-8 “Crusader”, the first aircraft with digital fly-by-wire, which worked on the basis of the on-board computer of the Apollo lunar module ( Apollo Guidance Computer ).

Another important date in development history is February 22, 1987. On this day, the first flight of the Airbus A320 took place. The A320 was the first commercial aircraft to dispense with a fully developed mechanical backup system. A mechanical emergency control, consisting of control of the rudder and the horizontal stabilizer, was available, however.

Planning of civil vertical take- offs did not lead to their readiness for series production, but provided important impulses for the development of fly-by-wire systems.

Modern military jets are primarily designed for high maneuverability or camouflage properties . The associated aerodynamic behavior is difficult or impossible for the pilot to control, which is why such jets basically require dynamic flight control and thus fly-by-wire. For example, the American F-16 “Fighting Falcon” without an activated attitude computer has the tendency to fly with a very high angle of attack in the supine position; the Eurofighter would pull upwards with an equally high angle of attack. It would not be possible for a human pilot to control the aircraft.

Another, earlier meaning of fly by wire comes from military aviation : flying as if on a wire . This means that the pilot (especially of a combat aircraft) specifies an intended flight direction for his aircraft, and the electronics take all further steps necessary to realize this flight direction. This is a relief for the pilot, since the on-board computers manage the same change in flight direction with the same input regardless of the altitude and speed. The aircraft therefore behaves in the same way in all flight phases. It was quickly recognized, however, that this was not an independent concept, but a continuation of the concept of electronic control.

In helicopters , the interaction of fly-by-wire and flight computer is used to relieve the pilot by z. B. the main rotor torque is automatically compensated or the height / floating position is held. The first commercial aircraft with a fly-by-wire control was the Concorde , which, however, was only produced in small numbers. However, the Concorde used analog electrical signal transmission. The first commercial aircraft to be manufactured in large numbers with digital fly-by-wire control is the Airbus A320.

Airbus A340-600: Tail tilt control during take-off and landing

All new designs of commercial aircraft are now equipped with fly-by-wire. The Airbus system used for the first time in the Airbus A320 contains so-called "Flight Envelope Protections". The flight control computer provides a fixed framework (angle of attack, inclination, speed, bank angle) in which the aircraft can be moved. The purpose of the system is to prevent dangerous flight situations. The Boeing system of the Boeing 777, however, does not prevent this; here the pilot has the decision-making authority in any case. For very long aircraft, such as the Airbus A340-600 , it is ensured that the tail does not touch the ground during take-off and landing (prevention of a tail strike ).

The C * concept is implemented in the normal operating mode (Normal Law) for Airbus aircraft from model 320. The sidestick does not directly change the control surface positions, but generates an indirect command. A certain roll rate is commanded for movements around the aircraft's longitudinal axis , a tilt rate is commanded for movements around the aircraft's transverse axis ( pitch ), but above a certain speed a multiple of the acceleration due to gravity. These specifications are then implemented by controlling the control surfaces and the flight attitude changes. If the sidestick is left in the neutral position, the aircraft will continue to fly automatically trimmed out the trajectory, i.e. the flight path is maintained while the flight attitude and speed can change. The selected flight path is only abandoned when the pilots issue new control commands or when the flight control computer detects a dangerously low or high airspeed, whereupon the nose of the aircraft is automatically lowered or raised.

A related system, C * U, is found in more modern Boeing aircraft (from Boeing 777). In contrast to C *, the flight control computers ensure that not only the flight path, but also the forward speed of the aircraft is kept approximately the same. If the horizontal tail unit of the aircraft is trimmed for a certain speed, the computer will lower or raise the nose of the aircraft in order to maintain this reference speed. By pressing the trim switch , the pilots inform the aircraft that the automatic trim of the tail unit is active again and that a new reference speed applies. The highest reference speed that can be selected is 330 knots. If the configuration of the aircraft is changed - by flaps or the landing gear - the lateral axis (pitch) is retained even if the speed should change. Both concepts, C * and C * U, reduce the workload on pilots.

A system comparable to C * can also be found in the Zeppelin NT .

Probably the most important advantage is that weight and space are saved compared to mechanical signal transmission. Electrical cables also mean much less work during the major maintenance work ( C and D checks ). It is also easier to design the lines for signal transmission redundantly . The installation of hydraulic actuators is also facilitated, which work independently of the rest of the hydraulic system (e.g. EHA and EBHA in the Airbus 380 ) and guarantee maneuverability in the event of a total failure of the hydraulic system.

Another great advantage arises when a computer checks the control signals in a so-called flight envelope protection system and restricts them if they would put the aircraft in a dangerous situation. This monitoring allows, for example, the pilot to give abrupt control commands in the event of an impending collision without the control commands themselves representing a further source of danger. In addition, the fly-by-wire enables an automatic and therefore much faster reaction to changes in flight path and attitude, such as those caused by turbulence .

The Habsheim plane crash and the ditching on the Hudson are mentioned as examples in which Fly-by-Wire and Flight Envelope Protection have saved lives . In both cases, the on-board systems prevented the pilots from choosing too great an angle of attack; the result was a relatively gentle crash landing.

The mechanical decoupling of controls and rudders makes an emergency system necessary in the event of an energy loss on the actuator side. In the case of hydraulically driven rudder adjustment, the hydraulic pressure or, in the case of electrically operated rudder adjustment, the operating voltage of the actuators can drop if all engines fail (lack of fuel). Emergency systems can be implemented with a ram air turbine (fold-out propeller), which supplies the required energy from the airflow during descent. Even without fly-by-wire, however, an emergency system may be required with hydromechanical control with a hydraulic pump.

Fly-by-Wire decouples the pilot from the physics of flight and the forces acting on the rudders and flaps. Modern developments provide artificial feedback by using actuators to simulate the forces on control sticks, horns and pedals as if the corresponding devices were connected to the rudders and flaps. The pilot can "feel" the behavior of the aircraft again. In addition, alerts can with a high priority, such as an impending stall , by mechanical shaking the side stick (so-called. Stick shaker ) the pilot with a high saliency to be notified.

According to the aviation accident expert Chesley B. Sullenberger , a possible disadvantage is that it is not immediately apparent to the pilots which control commands the other pilot is sending to the aircraft via the sidestick, as there is no mechanical coupling between the two pilots' sidesticks and the deflection of the sticks is very small and therefore difficult to see. This fact could have played a role in the crash of flight Air France 447 , since one of the pilots incorrectly pulled the nose of the aircraft upwards strongly, but this was not recognized by the other pilots and no correction was made. However, there is a consensus among pilots that the flight position should be assessed on the basis of the instruments, but not on the position of control sticks and sidesticks. Likewise, the pilots have to communicate their intentions to each other anyway (see CRM ).