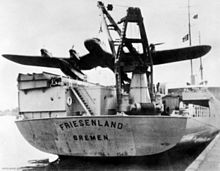 Seaplane carriers were ships that served as a base for catapult-capable seaplanes in the first half of the 20th century . In contrast to seaplane tenders and air traffic control ships , seaplanes could also be started from board.

Partly because of certain tasks, partly for reasons of secrecy and obscuration, partly due to structural peculiarities, there were different types and names for seaplane carriers.

Towards the end of the First World War, aircraft cruisers were built . While the aircraft mother ships were mostly relatively slow former merchant ships that could not follow the naval forces at sea, the aircraft cruiser was a fast warship with artillery to defend against enemy light naval forces and the technology for handling several seaplanes for aerial reconnaissance for the fleet at sea. The German Stuttgart and the Swedish Gotland were representatives of this type of ship.

Catapult ships , called slingshots by the German Air Force , were intended to catapult large seaplanes into the air with an airplane catapult. This made their start independent of wind and waves, and they avoided the huge fuel requirements for water starts, which is why their range or their payload could be increased. The ships were equipped with an aircraft lifting crane and facilities and equipment for the maintenance and operation of large, multi-engine long-range seaplanes and flying boats . In the Second World War, these ships also served as bases for long-range reconnaissance aircraft for the Luftwaffe.

As airbase ships the catapult ships or aircraft mother ships were designated Lufthansa that began these ships build their transatlantic airmail traffic in the 1930s. These converted merchant ships, such as the Schwabenland or the appropriately designed and built Friesenland , were equipped with aircraft catapults, aircraft lifting cranes , landing sails and maintenance facilities, as well as fuel tanks and accommodation for the changing aircraft crews. They also served as bases for long-range reconnaissance during World War II.

German plans from the early 1940s for the construction of military seaplane carriers were overtaken by the course of the war.

The aircraft mother ships are first transported the aircraft for the start of the water and after their water landing for their embarkation with the existing derricks cumbersome back and forth between water and ship and forth. The maintenance of the aircraft on board the aircraft mother ships was hampered by the makeshift refitting of the ships. As a result, ships for seaplane use were designed and built as seaplane carriers from the outset. In addition to the structural design as an aircraft carrier, the decisive improvements included the use of appropriately designed aircraft lifting cranes .

The development of the aircraft catapults in the 1920s made it possible to catapult aircraft into the air from on board, thus avoiding the cumbersome launching of aircraft for their wind and wave-dependent take-off from the water.

Boarding the aircraft was made easier by the invention of the landing sail in the late 1920s. After landing in water, an aircraft hit the landing sail that had been deployed by the ship as if it were a sandy beach, which largely eliminated the swell and made it much easier and safer for the crane to take the aircraft on board.