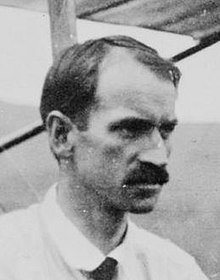 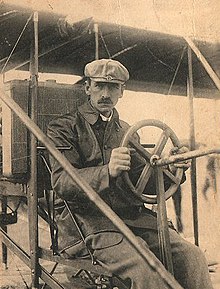 Glenn Curtiss in France in August 1909

Glenn Hammond Curtiss was born to Frank Richmond Curtiss and Lua Curtiss in a winery called Castle Hill. Although his father died in 1882, he enjoyed a sheltered childhood. His labor was demanded early on by his family, who let him help with the harvest in the vineyards. At school he was enthusiastic about mathematics , in which he brought home top grades. It was said, however, that it took him half an hour to think about something that could normally be done in fifteen minutes. In 1890 the family moved to Rochester because there was a school there for Glenn's deaf sister. After finishing school, Curtiss worked from 1892, first as a bicycle telegram messenger, then in camera production at Eastman . His path was thus mapped out. As well as being a good mechanic , he was also a good cyclist, so Curtiss bought his first bike in 1895. He took part in bike races and won his first championship in New York in 1896. On March 7, 1898, he married Lena Pearl Neff. Curtiss had four children with her.

Thanks to the experience he gained in cycling races, after setting up his bicycle repair shop in the meantime, he was able to set up his own bicycle production under the brand name "Hercules". Since bicycles were soon to be equipped with engines, Curtiss turned to this customer request in 1901 and became a motorcycle manufacturer. He initially designed lightweight single-cylinder engines with which he equipped his motorcycles. In 1903 Curtiss was the first American manufacturer to bring the V-2 engine onto the market with the “Hercules Twin”; At the end of 1903 Curtiss traded under his name and the “Hercules” brand disappeared. In 1903 Curtiss won the first American hill climb on one of his machines, in January 1904 he set a 10 mile record with his 695 cc "V-Twin" with 67.3  mph (108.3 km / h). At the same time as Indian , Curtiss developed the throttle grip in 1904 . Finally, on January 24, 1907, he achieved the unofficial world speed record for motorcycles of 219.4 km / h with the 40 hp Curtiss V8 . Curtiss was thus the fastest man in the world until 1911. The record for motorcycles was not broken until August 31, 1930 by Joseph S. Wright at OEC Temple JAP. In 1910 the motorcycle department was outsourced, the now called Marvel manufacturer maintained production with Curtiss engines until 1913.

But the first Curtiss engine already attracted enough attention. In 1904, Thomas Scott Baldwin ordered such an engine for the first American airship as a drive source. Curtiss' sole proprietorship soon grew into a real factory, and he merged with four other partners on October 19, 1905 to form the Glenn Hammond Curtiss Manufacturing Company. In May of 1906, Curtiss suggested that the Wright brothers use one of his engines in a Wright airplane. They also met in August, but the Wrights ultimately refused.

At this point in time, the idea of ​​flying was anchored in Curtiss. He made his first flight on June 28, 1907 in a Baldwin airship. To get closer to the goal, Curtiss teamed up with Alexander Graham Bell and other founding members to form the Aerial Experiment Association in Halifax , Canada . Curtiss became the experimenter in this venture. With the new company behind them, Curtiss tried again in December to deliver its engines to the Wright brothers, but they refused this time too. On May 21, 1908, Curtiss made his first flight in an airplane . On June 21 of the same year Curtiss started with his own construction, the June Bug , and immediately reached a new American course record (386 m). On July 4th, the same machine won the first of three Scientific American aviation awards by flying Curtiss over a kilometer. In November 1908 an attempt was made to take off from the water with a June Bug on floats, but this did not succeed. This failure spurred Curtiss on and began extensive experiments on the hydrodynamic drag of boat hulls.

In 1909 Curtiss founded Augustus Herring , another aviation company, the Herring-Curtiss Company . This company soon created the Curtiss Gold Bug and, as a scaled-down version designed for maximum speed, the Curtiss Golden Flyer . The gold in the type designation was chosen because of the yellowish glowing fabric covering. Immediately after completion in August 1909, the machine was shipped to Europe to take part in the Grande Semaine d'Aviation de la Champagne air race in Reims , France , endowed with a total of 25,000 francs . The machine's engine was derived from the motorcycle V-8 engine, but was water-cooled. On August 28, 1909, he achieved a new official, FAI -recognized world speed record for aircraft with 76.749 km / h, which he achieved at the first ever Gordon Bennett Cup . He was also able to secure victory over the 30 km distance.

Following this event, the Wright brothers filed a lawsuit in the United States. The reason was the violation of their rights to the ailerons used by Curtiss . This dispute lasted until 1917, when the US government defused the dispute due to the World War.

In May of 1910 a new Curtiss Airplane and Motor Company Incorporated seaplane was ready, but that too could not come off the water. On May 29, Curtiss flew from Albany along the Hudson River to New York City, winning the $ 10,000 Pulitzer Prize for a flight over 100 miles over water. The aircraft used was not a seaplane, but had floats for a possible ditching. Curtiss received the first pilot's license issued in the United States. On November 14th, a Curtiss aircraft was launched from a ship, followed by a landing on a ship on January 18, 1911. In the meantime, Curtiss had succeeded in making an airplane take off from the water by developing a new form of float. This succeeded on January 26th. An amphibious plane took off just a month later . This attracted the attention of the US Navy to the models of Curtiss (e.g. Curtiss JN-4 ), which issued him a manufacturing license for aircraft. In May Curtiss rented an area to train army members to be pilots. On May 8, 1911, the Navy then ordered two aircraft from Curtiss. On June 30th Curtiss demonstrated the military usefulness of the aircraft when he succeeded in dropping dummy bombs on a warship. 15 out of 17 dummies met.

In 1916 he developed the first flying boat with the newly developed stepped hull. His company went public and he became its first president.

Curtiss left his company in 1920 and moved to Florida with his family . He died in 1930 after an appendix operation (according to other sources: heart attack). Curtiss Bay , a bay in Antarctica, is named in his honor .