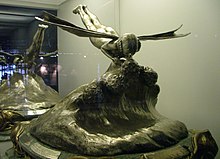 The Schneider Trophy at the Science Museum in London, 2004

Originally intended to promote technical development in the field of civil aviation, the Cup quickly developed into a competition in which machines exclusively developed for racing purposes took part.

Sometimes the events, which took place on a triangular course of initially 280 km, later 350 km, were watched by over 200,000 spectators.

The rules of the Schneider Cup stipulated that an air sports club that could win three races within five years could keep the cup; the pilot received prize money of 75,000 French francs .

Each race was held in the country from which the previous year's winner came from. Together with last year's winner country, the host was the Fédération Aéronautique Internationale .

The participating clubs were allowed to provide up to three pilots with the same number of substitute starters.

Chronicle of the races

In contrast to the competitions, in which there were no serious accidents, ten pilots were killed during the preparations from 1923 to 1931.