James Harold Doolittle (born December 14, 1896 in Alameda , California - † September 27, 1993 in Pebble Beach , California) was a pilot and a general in the United States Air Force . He became known for excellent flying performances and an early air raid on Tokyo during the Pacific War on April 18, 1942, the so-called Doolittle Raid . 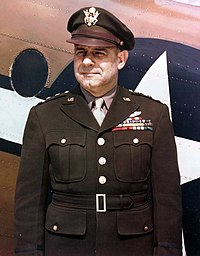 General Doolittle with advertising poster for the US Army Air Corps

After graduating from high school and Los Angeles Junior College , he studied at the University of California . Doolittle was a gifted boxer and won the West Coast amateur flyweight title . In 1917 he joined the US Army , where he trained as a pilot and trained new student pilots in air defense and tactics during the First World War in the lieutenant rank .

In the 1920s, Doolittle first gained fame for his flying talent. In September 1922 he made a transcontinental flight, during which he broke several records. He won several flight trophies, such as the Schneider Trophy in 1925 , and played a prominent role in the development of instrument flight . The Massachusetts Institute of Technology (MIT) awarded him a doctorate in the mid-1920s .

Lieutenant Doolittle retired in 1930, but remained in the Army as a reserve officer . As a racing pilot, he achieved the absolute world speed record in the Granville Gee Bee R-1 at the Shell Trophy and won the Thompson Trophy in 1932 . In the private industry he occupied himself with the further development of aviation fuels and in 1940 he became President of the Institute of Aeronautical Science .

In mid-1940 he became active again in the Army. His task was to convert the American automobile industry to arms production.

Air Force General Henry H. Arnold assigned Lieutenant Colonel Doolittle in 1942 to work out a possible air strike on Japan . This operation, carried out on April 18, 1942, became known as the Doolittle Raid . For his success he was awarded the Medal of Honor and he was promoted to Brigadier General.

After the war he continued to work in industry. In 1985 he was raised to the rank of 4-star general. James Harold Doolittle died in 1993 and was buried with military honors in Arlington National Cemetery. The Doolittle massif in Antarctica has been named after him since 2003 .

James Harold Doolittle was a member of the Freemasonry Association and his lodge was Hollenbeck Lodge # 3 19 in Los Angeles .

Doolittle has been portrayed a number of times in war films dealing with the Doolittle Raid:

Selection of decorations, sorted based on the Order of Precedence of Military Awards :

Many other states awarded him high honors after the war.