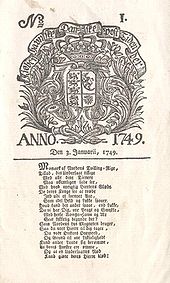 The Berlingske is the oldest still appearing Danish newspaper . It was founded by Ernst Heinrich Berling and was first published on January 3, 1749 in Copenhagen under the title Kjøbenhavnske Danske Post-Tidender . The newspaper belongs to the liberal-conservative spectrum and belongs to the Danish media company Berlingske Media , which has belonged to the Mecom Group since 2006 before it was acquired by the Belgian media group De Persgroep in 2014.

In its history the newspaper has been renamed several times: 1808 in Danske Statstidende , 1833 in Berlingske Politiske og Avertissementstidende , 1936 in Berlingske Tidende and since January 26th 2011 it appears under the name Berlingske .

While the newspaper had a daily circulation of 190,000 in 1948 (Sunday edition: 226,000), its number had fallen to around 100,000 by 2011. That corresponded to the second highest circulation of all daily newspapers in Denmark after Jyllands-Posten .

For Berlingske, two photographers have already won the press photo of the year election with their works :