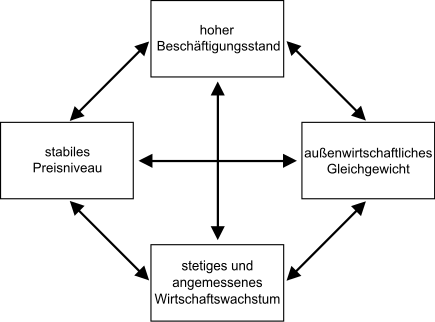 It found its way into the Basic Law for the Federal Republic of Germany as a national goal of overall economic equilibrium .

The goals and their equal status are anchored in the German Stability Act of 1967, but do not apply to the monetary policy of the European Central Bank, for example. Price level stability is their primary goal, which is the overriding goal.

Economic policy goals are set for economic and social areas in which unsatisfactory results have already been determined or where undesirable developments are feared. The attention of the state, central bank and social partners should thereby be constantly focused on these points. In this respect, it would have been logical to include the goal of a fair distribution of income in the statutory catalog of goals. However, this target is less clearly definable than the others.

Achieving these goals would be in line with macroeconomic equilibrium . The term magical expresses, however, that all goals can hardly be achieved at the same time, since there is incongruity among each other .

The implementation of the goals formulated in the law in measurable indicators is not easily possible. The following indicators should therefore be understood as examples of practical implementation and not as final definitions of the various objectives.

The level of employment is often measured in terms of the unemployment rate . This practical implementation of the measurement of the "employment level" target is problematic, however, as it can happen that the number of unemployed and those in employment develop in the same direction (e.g. in 2012 and 2013).

If the statistically recorded unemployment rate is less than three percent, it is usually referred to as full employment . The proportion below this is declared as “voluntary”, “frictional” or “seasonal” unemployment .

With a reasonable growth , the general increase in prosperity is referred to a country that has special meaning for less affluent populations. A steady growth is to avoid sharp swings in the development and fluctuations in employment.

Economic growth occurs when real gross national income or real gross domestic product (GDP) increases . In Germany, the amount of goods and services produced per capita in 2000 was twenty-eight times as high as in 1870.

The percentage change in economic growth is recorded retrospectively once per quarter. In Germany, the values ​​for two consecutive quarters serve as a signal generator. In the USA, on the other hand, only a quarterly value is taken and extrapolated for the year.

Phases of particularly strong growth in Germany were the so-called Gründerzeit from approx. 1870–1913 and the period of the economic miracle after the Second World War. The two world wars and the Great Depression in the 1920s and 1930s were phases of particularly strong fluctuations . As a result, growth has not been steady over the past 100 years. Since the founding of the Federal Republic of Germany, growth has shown a course that can be better described with the term "steady". But there were also dents during this period (first weak phase 1966/1967, oil crisis 1973–1975, recessions 1981/1982 and 1993/1994, economic and financial crisis 2008/2009 ).

The price level stability is measured with the help of the inflation rate of consumer prices. A shopping cart is put together with the goods usually consumed , the prices of which are collected monthly. If one compares the price level of the shopping basket with that of the previous year, one obtains the change which is called inflation with a positive sign and deflation with a negative sign . The European Central Bank , for example, interprets an inflation rate of close to but below two percent per year as price level stability. However, this information leaves some room for interpretation.

Price level stability means that money in a market economy can perform its functions as a medium of exchange, a store of value and a unit of account.

Measurement of the external balance

The external trade ratio is sometimes suggested as an indicator for this . It is calculated from the external contribution (= exports minus imports of goods and services) divided by the nominal gross domestic product .

During the creation of the Stability Act in the 1960s, Germany was still part of a system of fixed exchange rates ( Bretton Woods system ). From the point of view of the time, the external balance meant a situation that did not endanger participation in this system. However, this was not measured in terms of the external contribution ratio, but rather through the change in the central bank's foreign exchange reserves, which is recorded in the balance of payments. In 1973, when the system of free exchange rates was established, this goal was not redefined. The goal of the external balance is therefore often kept out of the magic square. In fact, however, it can be understood as avoiding a continuous current account deficit or surplus.

In 1967 the four goals of the magic square achieved legal status in Germany in the form of the Stability and Growth Act . They are named there in § 1 and together form the state objective of macroeconomic equilibrium ( Art. 109 (2 ) GG ).

In 2013, the Denkwerk Demokratie , a think tank supported by the SPD , the Greens and the trade unions , made the proposal to replace the four previous goals in the magic square with the following four new goals:

This new approach goes back to a study carried out in autumn 2012 by Sebastian Dullien and Till van Treeck for the Denkwerk Demokratie.
In December 2015, the Denkwerk Demokratie published a study entitled The New Magical Square in the Reality Check . The new study defines a slightly modified set of indicators compared to the 2013 study. According to these metrics, social and ecological sustainability deteriorated continuously in Germany from 2009 to 2013. The institute continues to propose using the “new magic square” to depict the development of prosperity and sustainability in Germany.

One speaks of a magic triangle when observing the three goals of price level stability, full employment and external balance. Sometimes there is also talk of the magical pentagon , hexagon , heptagon , octagon or nine- corner , whereby the magic square is then expanded by one or more of the following points: