Seqenenre , also Seqenen-Re , Sekenenre or Sekenenre Taa , was an ancient Egyptian king ( pharaoh ) of the 17th Dynasty (Second Intermediate Period) and ruled for about five years until around 1554 BC. BC, according to Franke until around 1545 BC. Chr.

Writing palette with the name of the sequence. Louvre Museum

Seqenenre was king of Thebes during the reign of the Hyksos in Egypt , so he only ruled the land between Elephantine and Abydos . At that time, the local city lords were vassals of the Hyksos. It is possible that there was some trade between them, but in all likelihood they had to pay tribute in the form of taxes to the rulers in Auaris . His ancestors had not questioned the authority of the Hyksos, but Seqenenre probably began to rebel against the Hyksos under their king Apopi I. Kamose, half-brother or possibly brother, and Seqenenre's son Ahmose continued his battle, driving the Hyksos out of Egypt and Ahmose established the 18th dynasty.

The lintel from a temple in Deir el-Ballas testifies to the king as building owner . He also built a palace on the east bank of Deir el-Ballas, which was probably designed as an image of the Hyksos palace in Auaris. He sacrifices Amun on a stele from Karnak . His name can be found on another stele of the priest Moses and some smaller objects such as the shroud of Princess Ahmose, seals, sphinx figures , throwing wood, comb, writing pallet, pendants and also a statue of Prince Ahmose. 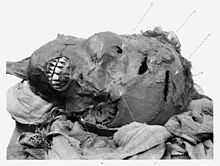 Badly damaged head of the mummy

The mummy comes from the Deir el-Bahari cachette and was officially discovered in 1881, perhaps as early as 1860. It is now in the mummy room of the Egyptian Museum in Cairo and bears the designation CG 61051. It was partially unwrapped on June 9, 1886 by Gaston Maspero . Grafton Elliot Smith completed the unwinding on September 1, 1906. The mummy is the oldest in the cachette to date, and suggests that Seqenenre was 35 to 40 years old and approximately 1.70 m tall when he died.

The Seqenenre's mummy bears many unusual injuries, including severe head wounds. According to Maspero , these clearly indicate that the ruler died in a battle. Daniel Fouquet's investigations showed that the poor condition of the mummy could also be traced back to natural decomposition during the transport to Thebes for mummification . Smith completely dismissed Fouquet's theory as it contradicted the apparent head injuries. The king was apparently stabbed behind one ear with a knife or sword. The cheek and nose may have been crushed with a club. In addition, large wounds were visible over the right eye and on the upper forehead, which may have been inflicted with a battle ax . Salima Ikram and Aidan Dodson referred to a recent examination of the wound behind the ear, according to which healing began before the king's death. According to this, it would also be possible that the king was only injured in battle and then fell victim to an assassination attempt during the recovery phase .

The rest of the body has been sparsely preserved and has many mysteries. The king's arms were still in a rigid position. Apparently no attempt was made to stretch them prior to mummification. It is also noticeable that the heart was removed. The heart was the seat of personality and mind and usually remained in the body, as it had a magical meaning in the belief in burial. The embalmers were either in a great hurry or deliberately wanted to prevent his afterlife in the afterlife. Instead, the brain remained in the skull, which in turn was usually removed. According to Smith, the bones were dislocated and held together only by the outer skin. Smith also mentioned a pleasant smell of aromatic powdered wood, which was scattered over the whole body.

In a more recent reenactment, however, it was shown that the wounds, because of their position, do not fit in with a battle, but rather with a public execution of a prisoner resting on his knees with hands tied rigidly behind his back. This was hit from the side by a Hittite ax on the forehead, with another blow the ax slipped sideways, but hit the cheek with the blunt side and dragged past the ear. The body fell over behind. The last blow is a pure show of force, with the attacker kneeling over the prisoner like a victor and ramming the ax handle head-on into his face, which hit the eye socket.

This points to a demonstrative execution of an Apopi (Greek Apophis) at a rather younger age against the rebellious Prince of Thebes Seqenere , who probably even belonged to extended relatives, such as uncle or cousin, and thus condemned, but according to his position at least in was buried in his own grave. In order to deny him eternal life, his heart was withheld from him as a damned man and his name was removed from the coffin. The mention of a Theban rebellion under Apopi and the mention of Seqenenre and Apopi in the Papyrus Sallier I (Inv. PBM 10185) of the British Museum as well as the mentioned controversies for the throne within the Hyksos dynasty can serve as evidence for this . Seqenere is only referred to as king in the introduction, otherwise as "prince" ( ḥq3 - Heka). An incomplete tradition from the 19th dynasty of the Ramessids describes that Apopis provoked the Theban vassal kings, after which the text breaks off. Thomas Schneider believes that Seqenenre provoked Apopis to war by building a pond, which resulted in his violent death.

The mummy was found in the original Rishi coffin , from which the royal uraeus and eye inlays were removed and much of the gilding scraped off. According to Nicholas Reeves , the inscriptions and symbolic elements were preserved and restored by ancient restorers and the gold layer was carefully removed. The restoration of the inscriptions may be an indication of thieves who, in the meantime, destroyed the inscriptions for reasons unknown.

According to the protocol of a commission of inquiry in the Abbott Papyrus , there was Achet III in the 16th year of Ramses IX's reign on 18th . an official inspection of the still intact pyramid tomb of Seqenenre, which Ikram and Dodson suspect in Dra Abu el-Naga . According to Reeves, it may have been robbed between that date and its transfer to the Deir el-Bahari cachette, otherwise the restorers would have had no reason to reburial the mummy. In addition, some coffin inscriptions had to be restored, which were destroyed by a damnatio memoriae or careless removal of the gilding by grave robbers. The most likely date for the destruction of the tomb would be the time of Ramses XI. because there were many grave looting took place there. According to Reeves, the mummy was first reburied in the q3y of the Inhapi and then transferred to the cachette after the 11th year of Scheschonq I.

The name of Seqenenre appears many years later in several Theban tombs (as one of the "Lords of the West"), from the beginning of the 18th Dynasty up to Ramses IX. Furthermore, in the biography of Ahmose, son of Ibana , it is reported from el-Kab that his father served as an officer under Seqenenre.

The dispute between Apophis and Seqenenre

From the Sallier I papyrus from the time of King Merenptah comes a story about a conflict between Seqenenre and the Hyksos ruler Apophis. It tells how Apepa ruled the land and provoked the Theban prince by complaining about the roar of hippos in Theban waters. For the background of the story one should know that the hippopotamus was considered a sacred animal of the god Seth , who was especially venerated by the Hyksos. With the Thebans, however, hippos were only bred to be ritually killed later.

Apophis tells Seqenenre to remove these as they disturb his sleep:

It happened when the land of Egypt was in need. At that time there was no lord but king. King Sekenenre was then ruler only in the southern city. Disaster reigned in the city of the Asians when Prince Apophis was sitting there in Auaris and the whole country paid him interest with his taxes, the south with his products and the north with all the beautiful goods of the delta.

… It is Apophis who sends you the following message: “Make sure that one withdraws from the canal of the hippos, which lies in the east of the southern capital (Thebes)! Because they don't let sleep come to him day or night. ”Because the noise they make fills his ears ...

Since Seqenenre did not know how to act, he called a council of officials and officers, but initially did not react to the order. When Apophis sends another messenger, this manuscript ends. Since it is probably a kind of heroic saga, one can assume that Seqenenre resolves the conflict wisely and prudently. It could well be that this dispute led to the incursion of Seqenenre's forces into Middle Egypt. In any case, the manuscript shows that tensions between the Hyksos and Thebans were increasing at this time.