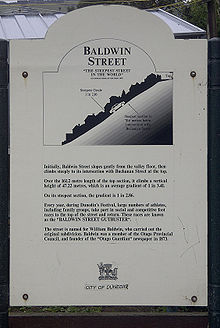 The Baldwin Street is in the Guinness World Records made the steepest street in the world. It is located in the North East Valley, 3.5 km north of Dunedin , New Zealand . The maximum gradient of the almost 350 meter long road is 1: 2.86 (19.3 ° or approx. 35%). Over the decades, the street has become a well-known landmark in the city.

Filbert Street and 22nd Street in San Francisco follow in the ranking of the steepest streets in the world, both of which have an incline of 31.5% (17.5 °). The situation on the originally similarly steep Lombard Street , which is also in San Francisco, has been defused by serpentines . Other cities in the US and other parts of the world claim to have even steeper roads.

Due to the extreme incline, it was made of concrete instead of asphalt, as asphalt would melt on hot days and slide down the road.

In 2019, the Guinness Book of World Records declared the road Ffordd Pen Llech in Harlech ( Wales ) with 37.45% of maximum slope to the steepest street in the world. Since the measurement was contested, it was decided a few months later that the measurement would take place in the middle of the street. That was a 34.8% incline for Baldwin Street and 28.6% for Ffordd Pen Llech. The title is therefore back on Baldwin Street.