From 1976 to 2009 the tallest television tower in the world: the CN Tower in Toronto

According to Duden , the terms television tower and telecommunications tower are synonymous with each other. In everyday language they are also often mixed up. In fact, there is a difference in meaning between the two terms in the German language.

A free-standing transmission tower for broadcasting VHF radio and television programs is referred to as a television tower . This designation is also often used for towers with directional radio antennas that have a viewing platform that is accessible to the public. This is usually located in the so-called tower cage . Some towers even have a revolving restaurant there . Often there are also the operating floors for the employees, the radio equipment and systems for maintenance and repair work (e.g. extendable cranes). For architectural and aesthetic reasons, a television tower usually only has one tower cage. Unlike the Olympic Tower in Munich, for example , which houses the company floors and the platforms for the public in two separate tower baskets.

The building materials cast iron , wrought iron and later steel enabled the engineers to build completely new bridges at the beginning of the 19th century . With the help of these new materials, the dream of building tall towers in the sky came true. As early as 1833, the English engineer Richard Trevithick planned to build a 1000-foot (305-meter) high column from cast iron elements. Later, for the American World's Fair in Philadelphia, a 1000-foot-high iron tube was to be erected, which was to be guyed with the help of steel cables. This never erected construction, which was supposed to measure 9 meters in diameter, had serious planning errors, so that its stability would have been questionable.

From the Eiffel Tower to the transmission tower

In 1881 it was proposed to illuminate Paris with a 300 meter high lighthouse . This tower was to be built of granite ; Gustave Eiffel rightly doubted the feasibility of this project and in 1885 presented his plans for the construction of the Eiffel Tower to the public. The design of the 300-meter-high tower made of steel framework was intended to absorb the wind forces particularly favorably with four widely spread legs. Despite numerous critics and opponents, Gustave Eiffel was right with his prognosis that this building would become a symbol of progress. It was the main attraction of the World's Fair. In addition, it became an experimental laboratory for meteorological, physical and even physiological experiments. Wireless telegraphy was also tried out, which makes the Eiffel Tower the first radio tower in history, although it did not retain this function for long and was built for a different motivation (observation tower of the world exhibition ).

The Eiffel Tower became the model for many steel tower plans. However, he was not the first lattice tower , because several years earlier some small were Towers in steel framed structure built as the Büchenbronn Observation Tower , an observation tower Götzinger height or the observation tower Kulm Saalfeld . The city of London announced a tower building competition in 1890. The twenty suggestions received envisaged towers between 300 and 456 meters high. Construction began, but only a 47 meter high stump emerged that was demolished in 1907 ( Watkin's Tower ).

At the beginning of the 20th century, with the invention of radio communication, there was a need for high towers, which could most easily be realized as a steel framework. At that time, however, almost all radio traffic took place in the range of long waves (wavelength> 100 meters), so that the antenna towers erected at that time mostly carried wire antennas, which were attached to the structures such as overhead lines on high-voltage pylons with insulators. Often these towers themselves were also placed on insulators to prevent the antenna currents from flowing away over the structures. 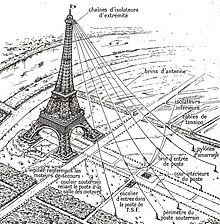 Radio telegraphic use of the Eiffel Tower 1914

The antenna system of the Eiffel Tower, which was used until the mid-1950s as a transmission tower for radio services in the long-wave range (and 1922 to 1940 for medium wave broadcasting), consisted at that time of several wires to insulators at the top of the tower and several anchor points in the Mars field were fastened .

In addition, the first self-radiating transmission masts were erected, in which the whole tower represents an antenna isolated from the ground. Since radio towers isolated from earth carry a more or less high high-frequency voltage to earth during transmission, these structures cannot be used as observation towers, since access to the tower would only be possible via a connecting bridge made of insulating material.

Until the mid-1930s, only one transmission tower with a viewing area was built, namely the Berlin radio tower . It should also be set up insulated from the ground, but it was then grounded via the elevator shaft, since otherwise too high tensions would have occurred at the tower feet, which would have had unpleasant consequences for the visitors. However, the grounding of the Berlin radio tower meant that only relatively little high-frequency energy was emitted in the direction of the city center of Berlin, the main supply area of ​​the medium-wave radio transmitter installed on the tower, which is why a filling transmitter was installed in Boxhagener Strasse at the time .

Between 1930 and 1935, the construction of transmission towers for medium wave broadcasting in Germany took a special route by hanging wire antennas in free-standing timber lattice towers with a height of up to 190 meters or attaching them to the outside of the towers. This construction method was abandoned after 1935 after a tornado destroyed the only one year old wooden tower of the Langenberg transmission tower . After 1935 only a few wooden transmission towers were built, for example for the Golm transmitter in Potsdam.

In the former eastern regions, two wooden towers survived the Second World War in Zorawina and Gleiwitz . The former was demolished in 1990, while the latter is the tallest wooden tower in the world and represents the last relic of this era.

In the mid-1930s, with the invention of television, the need arose to build towers for the transmission of ultra-short waves. Since the antennas in these frequency bands are short and the propagation is quasi-optical, structures had to be erected in exposed places or structures as high as possible, which, in contrast to transmission towers for long and medium waves, are only pure antenna supports and are therefore made of any material as an earthed structure can.

The first television transmission tower was the Berlin radio tower , on the top of which a corresponding antenna was installed in 1935. A little later, for the start of regular television broadcasting in Germany, which was canceled due to the outbreak of the Second World War, the construction of further television towers began on the Brocken , on the Feldberg im Taunus and on the Großer Inselsberg .

All of these towers were more like high-rise buildings than broadcast towers. The television tower on the Brocken was given a glazed viewing platform, while the transmission tower on the Großer Feldberg consisted of a concrete tower with a metal-free wooden structure to protect the antennas. The television tower on the Großer Inselsberg consisted of a cylindrical concrete structure. Since regular television broadcasting operations did not start due to the outbreak of the Second World War, these towers were converted into radar stations shortly after the outbreak of the Second World War.

Since transmitting antennas for ultrashort waves can in principle be installed on any structure of sufficient stability, some suitable existing structures were also provided with such antennas. The Empire State Building was given an antenna mast on its top and the former Tour métallique de Fourvière observation tower in Lyon was converted into a television tower that is not open to the public.

From the radio tower to the television tower

The Stuttgart TV tower was the first high tower in the world to be designed as a slim tube in reinforced concrete, after a few smaller reinforced concrete towers , such as those at Beckum , were built for radio relay purposes. It was designed by the Stuttgart civil engineer Fritz Leonhardt , started in June 1954 and completed in February 1956. The tower, with its novel construction, served as a model for many other television towers, the slim tower shaft was made similar to modern factory chimneys .

The increasing demand for radio and television transmission ensured that many new television and telecommunications towers were built around the world from the 1960s onwards. In Germany around 300 of them were erected as standardized type towers on behalf of the Bundespost at suitable locations. In addition, the ARD broadcasting corporations, some mine administrations and the military built reinforced concrete transmission towers, although these institutions often continued to erect free-standing or guyed steel towers. When the postal companies in Germany were privatized, they were initially transferred to Deutsche Telekom and, in 2002, to Deutsche Funkturm (DFMG). In the case of towers in large cities, public facilities, such as B. integrated viewing platforms or tower restaurants to increase the acceptance of the towers. Many of the largest cities in Germany got their "own" television tower. Most transmission towers, however, are often far away from populated areas and are usually not accessible to the public.

Concrete transmission towers were not widely used in all countries. While they are quite common in Germany, the Netherlands and the Czech Republic, this type of construction was very rarely used in the UK and the USA.

Concrete towers are not the first choice for all radio-technical purposes. For transmission systems that work in the long, medium, and short wave range, a tower isolated from earth is often the best choice and a concrete tower is too heavy to be placed on insulators.

The tallest television tower in Germany is in Berlin.

The height of a television tower is largely determined by the need to place the antenna high enough that the signals can be transmitted without interference and received over a large area. In numerous large cities in North America, skyscrapers mostly take on this function.

TV towers have lost their importance as a tourist attraction in a city in Germany. This can be seen from the fact that at the beginning of 2012 only three of the ten highest (over 240 m) television towers in Germany were open to guests:

It has become more difficult to find tenants who are willing to invest heavily in modern fire protection , elevator technology and marketing.