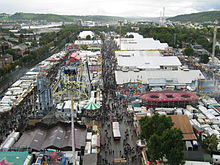 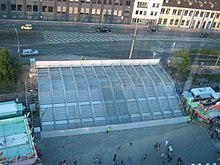 Escape stairs to Mercedesstrasse from the festival area

The open space on the Cannstatter Wasen is around 25 hectares . The Swabian folk festival usually starts a week later than the Munich Oktoberfest . The Cannstatter Volksfest claims the title of “Europe's largest showman festival” due to the large number of showmen. According to the organizer Andreas Kroll, managing director of the “in.Stuttgart Veranstaltungsgesellschaft”, 4.2 million people attended the 161st Cannstatter Volksfest in 2006, which corresponds to an increase of 20% over 2005. In 2007 a further increase was achieved with 4.5 million visitors.

In 2011, two wide escape stairs to Mercedesstrasse were built for the first time. They are normally closed and should only be opened by the folders in case of panic.

History of the Cannstatter Volksfest

The Cannstatter Volksfest was celebrated for the first time in 1818. Intended as an “ agricultural festival to be held annually on September 28 at Kannstadt ”. The indirect reason for the first folk festival is in Asia, where the Indonesian volcano Tambora exploded in 1815 . For years, gases and dust caused climate change ( year without summer ) and thus failed harvests and famine. So an agricultural festival and an agricultural teaching institution was created, known as the University of Hohenheim .

The festival was a great success in the first year. Well over 30,000 guests and contributors reported on it. Over time, the Cannstatter Volksfest grew and gained in importance. High points in the early history of the festival were the celebrations for the 25th anniversary of King Wilhelm I's reign on September 28, 1841 ( pageant of the Württembergers ) and the Franco-Russian meeting of two emperors with a visit to the Wasen on September 28, 1857. On September 28, 1876 came Emperor William I and his son Grand Duke Friedrich I for Carnival, also in 1881. in the 19th century, the festival lasted initially only one, later three, then four, from the 1920s finally five days. At the beginning of the 1950s, the Wasen was extended to initially ten, then twelve and finally in 1972 to 16 festive days. The festival has lasted 17 days since 2007, as the start has been brought forward from Saturday to Friday.

At first there were only a few “Volksfest stalls” with showmen and beer. They were relegated to the edge of the actual festival area in favor of the royal box and the dignitaries' stands. As early as 1860, as a result of the increasing numbers of showmen, the typical layout of three main streets and numerous side streets was established today, in order to leave enough space for the increasing number of visitors from year to year.

The Cannstatter Volksfest was opened until 2006 on Saturday around September 27th, the birthday of King Wilhelm I, in his honor; the earliest date is September 22nd. Since 2007 the festival has already opened on Friday at 3 p.m. the tapping of the keg will be broadcast live on regional television by the mayor of Stuttgart on Friday evening .

The historical folk festival was celebrated daily from September 26 to October 3, 2018 from 11 a.m. to 10 p.m. in addition to the anniversary on Schloßplatz in downtown Stuttgart.

On April 29, 2020, the 2020 Volksfest was canceled due to the Covid-19 pandemic . "For us, this is the worst-case scenario ," said Werner Burg Meier, president of the National Association showmen and market traders.

At the Cannstatter Volksfest there are nine festival tents (seven beer tents and two wine tents ) as well as a large number of smaller gastronomic establishments with beer gardens. Center are the three brewery tents (the marquee Klauss the brewery Dinkelacker , the marquee Wilhelmer's Schwaben world of brewery Schwabenbräu and the marquee Hans-Peter Grandl the brewery Stuttgarter Hofbräu ), who side by side in front of the fruit column since 1982 their traditional place. The arrangement of the three tents changed annually until 2008, the tent of the leading brewery (whose barrel is used when the mayor is tapping) was always on the far right. The arrangement has remained the same since 2009. Before 1982 there were four somewhat smaller brewery tents that were set up on either side of the fruit column. The fourth tent was the marquee of the Wulle brewery , which was taken over by Dinkelacker in 1971 and shortly thereafter no longer existed as a brand. There were 26,000 covered spaces in Stuttgart approved under building law ; in 2009 this number increased to over 30,000 as a result of various renovations and extensions. The tenth large operation on the Wasen is the Almhüttendorf, which is not a festival tent, but offers a different form of festival operation from a collection of alpine-style huts (seating capacity approx. 1500).

There have been many changes on the Wasen over the decades, including an (incomplete) overview of the no longer existing marquees.

Brewery tent Wulle AG
Fourth large brewery tent. The brewery was taken over by Dinkelacker in 1971. The tent was operated by the Göckelesmaier host family until 1981, before the reorganization with three brewery tents came into force. Since the 2020 season, beer from the Wulle brand has been served again in the Göckelesmaier festival tent.
Plochinger
Smaller brewery tent of the Plochinger Waldhornbräu. After the brewery was taken over by Stuttgarter Hofbräu, the tent was no longer erected.
Alpirsbacher adventure tent
Successor at the location of the former "Plochinger". As an adventure tent with a darkened atmosphere and integrated waterfall, the tent offered a completely new concept at the time.
Arcadia
Successor to the Alpirsbacher adventure tent. Last time in 2008 on the Wasen. Has been replaced by the Cannstatter Wasenzelt (with a traditional concept).
Schwieberdinger
Smaller brewery tent of the Schwieberdinger Lammbräu . The tent was no longer erected after the brewery was shut down (taken over by Stuttgarter Hofbräu).
Wienerwald marquee
most recently in the 1970s.
Apple tree
Event gastronomy for young visitors. Last built in 2004.
Betz marquee
Smaller, privately run tent with Dinkelacker beer in the bar.
Marquee Atz
Landlords Hans and Gerd Atz, Schwaben-Bräu
Stamerhof (host family Stamer)
For many years, Henny and Ernst Stamer's wine tent with a capacity of 300 people was located on the Wasen. The tent was set up for the last time in 2011 and replaced by the "Württemberg House".
Württemberg House (host Marco Grenz)
Located directly at the fruit column, the Württemberg House, modeled on a farmhouse, was erected for the first time in 2012. It offers approx. 1000 seats and upscale restaurants on 2 floors. The Württemberg House has not had a permit since 2013.

In addition to the festival tents, the big attractions include the fairground booths and rides. In 2004, Volksfest boss Karl Kübler selected 333 attractions (previous year: 302) from 1054 applications. One of the biggest attractions of the Cannstatter Volksfest up to and including 2009 was the world's largest transportable Ferris wheel with a diameter of 60 meters from the Steiger company from Bad Oeynhausen . Since 2010, after the city of Stuttgart granted the license to a competitor for the first time, the Riesenrad is no longer represented on the Wasen (Note: The Steiger Riesenrad company therefore took the city of Stuttgart to court and won the trial in 2011. The company has not been there since more present in Stuttgart on the Wasen).

However, since 1998 there has been no looping roller coaster . From 1984 to 1997 this was the main attraction of the festival. In 2004 the " Imperator " stood on the Wasen for the first time . The largest carousel in the world offers 64 passengers loop rides up to 35 meters high. The 66 meter high “Power Tower 2” celebrated its premiere. The double loop roller coaster " Test Track " has been in use since 2009 (also at the Spring Festival). Since 2010, the somewhat smaller Expo Ferris wheel ( Mega Wheel Millennium Star ) has been installed at the Cannstatter Volksfest in place of the Steiger 60-meter Ferris wheel .

Top of the fruit column

The fruit column is a 26-meter-high, 3.5-ton wooden column decorated with fruits, which is the symbol of the Cannstatter Wasen. However, it is now dominated by numerous rides.

Already at the first folk festival in 1818 there was a fruit column as a landmark, which was designed and built by the Württemberg court architect Nikolaus Friedrich von Thouret . After the First World War , with the beginning of the first German republic, the fruit column was banned from the Cannstatter Wasen as a “monarchist” relic. Since the 100th anniversary in 1935, it has been back in its original place.

The design of the fruit column has changed over and over again over the years. Until recently, it was dismantled every year after the folk festival and a new fruit column with a different design was built. From 1995 onwards it was left standing all year round on an experimental basis and was thus seen for the first time at the Stuttgart Spring Festival . For a few years now, only the tip has been dismantled and the substructure has been left where there are some information stands and which carries the Cannstatter city jug during the spring festival.

Every four years the folk festival is connected to the main agricultural festival - the original trigger for the autumn hustle and bustle on the Wasen. The main agricultural festival lasts nine days (first week of the festival) and, unlike the fair, costs admission. Since the main festival in 2006, the rhythm of the organization has changed. The event previously took place every three years.

Friedrich Wilhelm Schnitzler and Ernst Geprägs were also popular speakers in front of thousands of trade fair visitors at the annual opening of the International Green Week in Berlin .

Tents, food stalls and rides are open from Sunday to Friday from 11 a.m. to 11 p.m. On Saturdays and before public holidays, it is open until midnight, but the music in the festival tents ends at 11.30 p.m. Many children's carousels and other rides for children often stop operating at 10 p.m. In 2007 there were 73 other shops at the festival: shooting, lottery and throwing booths and show shops, 95 sales outlets for food, a grocer's market with 60 market stalls and a boxing show. For comparison: At the Munich Oktoberfest in 2004 there were 41 rides, 16 children's rides, 17 show and amusement shops and 65 small restaurants. In 2009 there was a roller coaster with a loop for the first time in several years.

Traditionally, there is a parade to Wasen - on the first Sunday of the festival. A parade record that has not been surpassed to this day was set in 1954 when over 300,000 spectators lined the streets between Schlossplatz and Wasen. Farm animals like the Mohrenköpfle line up in the parade. Strict rules apply to those involved: historical footwear, headgear. No long, loose hair in women. No excessive makeup, painted fingernails, sunglasses, visible piercings and tattoos. Music bands and minstrels' and fanfare parades can only apply if they are wearing historical costume or uniform. A prerequisite for traditional bands is that men are dressed in men's costume and women in women's costume.

To attract families with children, special child or family tariffs have been offered for several years on certain dates in some tents or rides. Several festival tents offer special discounts during the day, such as lunch offers or pensioner tariffs (the “Rentnerviertele”). There have been gay evenings since 2002, such as at the Munich Oktoberfest. The “Wasenwirt” marquee has been holding a “Gaydelight Party” since 2002, and the “Gay Chicken Night” has been taking place in the “Göckelesmaier” marquee since 2005.

The German Unity Day at the beginning of October has offered operators an additional day off during the festival since 1990. On the occasion of the national holiday , the old tradition of the folk festival fireworks was revived. At the end of the festival, the 20-minute musical fireworks display takes place on the last Sunday at 9.45 p.m.

In 2018, on the 200th anniversary of the Cannstatter Volksfest, parallel to the "normal" folk festival on the Wasen from 26.9. until October 3rd from 11 a.m. to 10 p.m. on Stuttgart's Schloßplatz there will be a historical folk festival. It offered a ferris wheel built in 1902, an illusion show, a flea circus, a marquee, some historical rides and organs as attractions. There were also artistic performances. A special feature were several information stands on the history of the Cannstatter Volksfest.