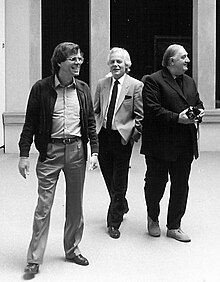 Sir James Frazer Stirling (born April 22, 1926 in Glasgow , † June 25, 1992 in London ) was one of the most important British architects of the 20th century. Stylistically, it is attributed to postmodernism . 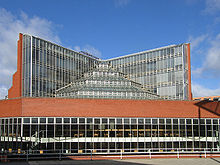 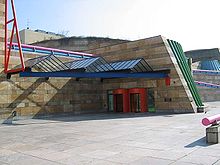 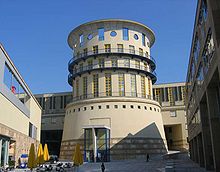 James Stirling studied architecture at the University of Liverpool from 1945 to 1950. In 1956 he founded the Stirling and Gowan office with James Gowan. The best-known result of this collaboration is the building of the engineering faculty in Leicester , which stands out for its technical and geometric character. This also identifies the isometrics from a bird's eye view that are often used by Stirling . From 1963 he continued to run the office alone.

In 1971 Michael Wilford , who has been with the office since 1960, became a partner in the office. In the 1970s, Stirling's architectural signature began to change. Stirling, previously considered a rationalist or brutalist, turned into one of the main representatives of eclectic postmodernism . The Neue Staatsgalerie Stuttgart is considered a masterpiece in this regard, in which he processed a large number of regional and supra-regional citations from architectural history.

After Stirling's death, the office was initially continued by Michael Wilford , and from 2002 by Michael Wilford, Manuel Schupp and Stephan Gerstner under the current name of Wilford Schupp Architects. Michael Wilford resigned as Managing Director at the end of 2013. Various structures, such as B. the building of the University of Music and Performing Arts in Stuttgart , 1993-1994, were realized posthumously .

In 1981 Stirling was awarded the prestigious Pritzker Prize , and in 1978 the Alvar Aalto Medal . In 1990 he was elected an honorary member of the American Academy of Arts and Letters . Shortly before his death, he was raised to the nobility on June 13, 1992 as a knight .