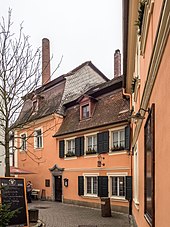 Under local color (from the French. Couleur locale: , local color ') refers to the character and atmosphere that characterize a city, a region or country. These can be sights ( Eiffel Tower , Cologne Cathedral , Hamburg harbor ), celebrations ( Oktoberfest , church fairs , wine festivals ), traditional costumes and customs ( Carnival, Mardi Gras , Plantanz ), games ( Schafkopf , Skat ) or dialects . Gastronomy (in Bavaria the inn culture ) with its countless specialties and characteristic locations (Bavarian beer gardens , Franconian beer cellars or in Austria the Viennese coffee house ) plays a special role (but with less attention in Northern Germany ). Plays a key role in the local color naturally the all formative, local lifestyle of the people - in English-speaking countries it is called in this context rather regionalism (regionalism) .

The term coloring originally refers to the coloring of a painting. Because the stage sets were painted until the end of the 19th century, he was able to refer to the illusion technique of the theater stage. In a broader sense, it was also carried over to the costumes, music and other components of the stage performance. In the 18th / 19th In the 19th century, the idea was formed that a color could characterize regional characteristics.

The local color in images, in texts and in the performing arts often affects the perception of the original back: As explained Goethe 's Central European readers in the Italian Journey , that a square in Naples so look like a market scene in the Italian opera buffa ( "People's lives in Naples "). Often to be cliché froze ideas used to make a scene to characterize in a literary work or film. Special features are presented in such a way that they have a recognition effect.

Local color can either emphasize the familiar, the familiar or the strange and unfamiliar. Above all, it dampens the potentially unsettling aspect of every stranger by giving them a tourist recognizability and availability. In this sense, it is omnipresent in novels, film and television formats: “The local color is nothing incidental, but rather belongs to the scheme of the orderly world that is threatened by the extraordinary.” For example, the Eiffel Tower is shown in many films set in Paris , lively accordion music played and baguette- buying berets shown. The local oriental color has a long tradition ( minarets , turbans and colorful carpets, etc.).

In linguistics , we speak of local color when foreign or non- standard language words and expressions remain untranslated or uncorrected in order to characterize something special or foreign (such as "Reverend" instead of "Reverend" in a text translated from English).

In the genre painting there is local color at least since the 17th century. As a counter-movement to classicism , which tried to break away from local restrictions, the local color experienced a boost in the 18th century, also in the course of the appreciation of the bourgeoisie , its language and its way of life. The popular Turkish opera , on the other hand, brought together everything that was considered strange and exotic on stage. The romance was trying to break away from ancient models and to transfigure the local, as in the so-called folk songs and folk tales .

The local color experienced a high point during the Biedermeier period . Now it was more committed to a realism that asserted the truthful portrayal of social conditions. In the theater, for example, the local farce or the serious life picture with dialects and allusions to local customs, local architecture and geography emerged. The realism in literature and theater exacerbated the truth claims of such representations. When editing popular pieces, however, it often became apparent that their local color could be exchanged at will. A late example is the Viennese operetta Servus, servus (1935) by Robert Stolz , which was given in Italy as Ciao, ciao and in Switzerland as Grüezi, grüezi . - The foreign or distant as an imprecisely defined local color asserted itself in theatrical forms such as the feerie and the extravaganza .

Local color as the achievement of a machine of illusion has been evident since the middle of the 19th century: in panoramas and dioramas , later in national shows or theme parks such as Venice in Vienna .

Today local color in the form of beloved clichés has a tourist significance, as travel destinations adapt to the expectations of the guests. In the period film , one tries to research the local circumstances fairly precisely, but mostly without taking linguistic peculiarities into account. The “oriental” local color as a sign of the strange and adventurous is often shifted in fantasy films to a more neutral fantasy world in which a judgmental depiction of skin color or clothing habits is avoided.