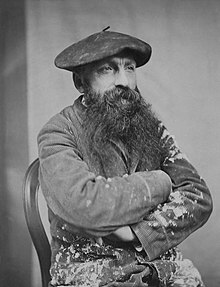 Auguste Rodin with a beret

A beret (also called alpine hat or Alpino in Scandinavian countries and the Netherlands ) is a headwear made of wool or felt (today also made of cotton, see below), which is related to the beret and not from the Basque Country , but from the neighboring region, the Béarn , comes from. In contrast to the beret, the beret is a civilian headwear, even if the autonomous police officers of the Basque Country ( Ertzaintza ) and Navarre ( Policía Foral ) wear red berets. In the middle she often has a short stub, a remnant of an earlier long bobble.

Although exact dates are not known, it is certain that the beret has been worn for a very long time in the mountain valleys of the Pyrenees in the French Basque Country and in neighboring Béarn .

The name goes back to Emperor Napoleon III. back, who enjoyed spending time in the Basque Country with his wife Eugénie. There he saw many of these hats and wrongly called them béret basque , beret. Since nobody dared to contradict him, the term caught on. In reality, the "Béret" is a headgear that is popular throughout south-west France, in Béarn, Gascony and the Basque Country. Originally it was the knitted woolen hat of the shepherds in the Pyrenees. Later it was made from felt.

During the French Revolution , the headgear came to Paris . The hat gained special importance in the 19th century during the Carlist Wars , when General Zumalacárregui introduced red berets as a symbol of the Navarre battalions. As a result of this use, the beret as a symbol of national identity in its civil version in black or dark blue also became a common headgear in the Spanish Basque Country.

Since the general distribution, the beret has been manufactured on the French side in factories around Oloron since the 19th century and on the Spanish side in Tolosa by the Elósegui company and from 1892 by the Fábrica de Boinas La Encartada . In South America (particularly Argentina and Uruguay), too, a long tradition of making berets has established itself - going back to Spanish immigrants from Tolosa. In addition to wool and wool felt, cotton has recently been used there to make particularly light summer boinas. These hats are enjoying increasing popularity, especially among the local cattle herders, the gauchos. Many armies around the world also adopted the beret, which can be folded into pockets or rolled up under the epaulets.

In France it was worn across the country in the 1940s, and it became so popular that wearing the "French hat" during the German occupation in Alsace-Lorraine was considered a sign of resistance, which is why it was banned. Nevertheless, it was also the headgear of the Milice française , an auxiliary force of the Vichy regime that fought the Resistance . It was later worn by intellectuals and artists around the world.

With the takeover of Béatex and Blancq-Olibet, Laulhère in Oloron-Sainte-Marie is now the only remaining French manufacturer of berets. The Spanish company Elosegui also produces in Tolosa . There is a beret museum in Nay and in Balmaseda , where the La Encartada textile factory produced berets from 1892 to 1992.