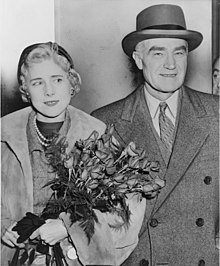 Luce was born in Tengchow, China, to the Presbyterian missionary Henry Winters Luce . He was taught at various boarding schools in China and England . When he was 15 he came to the US for the first time to attend Hotchkiss School in Connecticut; In 1920 he received his doctorate from Yale University , where he was also affiliated with the Skull & Bones fraternity .

The meeting with Briton Hadden , the editor-in-chief of the school newspaper in Hotchkiss, was decisive for his professional career . Luce worked there as Assistant Managing Editor . The two continued their work at Yale; Hadden as chairman and Luce as editor-in-chief of the Yale Daily News . After graduating from Yale, Luce spent a year studying history at Oxford . Upon his return he worked for the Chicago Daily News . In 1921 he joined Hadden with the Baltimore News. Both gave up their work in 1922 to start "TIME Magazine".

The first edition of “TIME” came out on March 3, 1923, Luce was the business manager and Hadden was editor-in-chief. After Hadden's death in 1929, Luce took up Hadden's position. In 1930, Luce took over the business magazine " Fortune " and in 1936 the graphic "Life Magazine". In 1952 he published " House & Home " and in 1954 " Sports Illustrated ". He also produced the documentary series "The March of Time" for radio and cinema.

Luce, who remained editor-in-chief of all of his magazines until 1964, was an influential member of the Republicans . With his anti-communist attitude and his interest in his native country, he was an important figure in the so-called "China Lobby" and played a large role in America's foreign policy in favor of the nationalist leader Chiang Kai-shek and his wife Soong May-ling to to steer.

He was an avid supporter of fascism in the 1920s and 1930s . Time Magazine published five cover stories about Benito Mussolini . In a speech he gave to the Pennsylvania Parliament in Scranton on April 19, 1934 , he said: "The moral force, which appears in completely different forms in different nations, may perhaps be the inspiration for the next General March Be history. "

Despite his conservative stance, Luce was an early counterculture and an avid experimenter with LSD . He took the drug a few times in the late 50's and early 60's under the supervision of Dr. Sidney Cohen, who worked with the University of California and Los Angeles Veterans Hospital. Cohen also introduced the drug to Luce's wife. Clare Boothe Luce was seen as the first grande dame of American post-war politics.

Luce had two children from his first marriage, Peter Paul and Henry Luce III. In 1939 he married his second wife, Clare Boothe Brokaw.