The Max-Josef-Metzger-Platz is a city ​​square with a park character in the Berlin district of Wedding . The triangular square was built in 1862 according to plans by city building officer James Hobrecht and is now bordered in the west by Müllerstrasse, in the north by Rechtsstrasse and in the east by a paved path that connects Müllerstrasse with Rechtsstrasse. Since April 21, 1994, the square has been named in memory of Pastor Max Josef Metzger (1887–1944).

In the area between the country roads to Tegel ( Müllerstrasse ) and Reinickendorf ( Reinickendorfer Strasse ) and a field lane, the present-daygerichtstrasse, there was still a contiguous arable land in the 19th century, which was also used for lower royal hunting justice (hares, foxes, roe deer, partridges ) was occupied. In addition, there were three windmills on the hilly terrain, facing Müllerstraße u. a. gave their names. The area has been used for agriculture by the gardener M. F. Freudenberg since 1822. 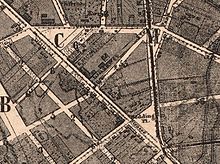 Place C, Dept. X / 1 in the northwest of the previously agriculturally used area in the Hobrecht plan, in the southeast of Weddingplatz

With the Hobrecht plan of 1862, the rural area was planned with the typical Berlin perimeter block development. Of the area formerly used for agriculture, only today's triangular square (working title: Platz C, Dept. X / 1 ) and Weddingplatz remained as open space. The increasing development of the Wedding led to growing devastation on the property of the still agriculturally used area. In particular, the students at the nearby school did not let thorn hedges, wooden fences, moats and earth walls stop them from stealing the harvest.

In 1875 the magistrate bought the property. Due to its lower location, some of them only served as a collecting basin for waste water. The police therefore applied for a green area to be created for hygienic and aesthetic reasons. The horticultural director Gustav Meyer received the order to design the usable area as a decorative space . Since the completed square had no name, it was popularly known as "Lausepark" or simply "Meyerpark". On December 3, 1887, he was awarded at the request of Mayor William Griebenow the name Courbièreplatz after the Prussian Field Marshal Wilhelm René de l'Homme de Courbière , which in 1807 during the general collapse of Prussia by the successful defense of the fortress Graudenz against the troops of Napoleon had distinguished . As a result of the inheritance of the government official Edwin Fischer, a children's playground was created in the north-eastern area in 1920/21.

After the square was destroyed in World War II, the former jewelry square functioned as a garbage dump and rubble site. Among other things, weapons and ammunition were disposed of here, so that at least 250 kilograms of ammunition , weapons, grenades and incendiary bombs were found during the redesign in 2017 . New planning began in 1949/50. The garden director Günther Rieck in Weddingen added design elements from the 1920s to the still recognizable Meyer's floor plan. The facility, which was previously designed according to baroque and landscape models, has now become a functional green area.

In 1970, Gerhard Croon essentially gave the square its current shape. The concept in the style of the 1950s and 1960s clearly separates flower beds, lawns, play and relaxation areas according to their function by means of orthogonal paths. The last renovation took place in the early 1980s in the area of ​​the children's playground. On the occasion of the 50th anniversary of the death of priest Max Josef Metzger , who lived in Wedding during the war years and worked in the neighboring St. Joseph Church and was murdered by the National Socialists on April 17, 1944, the square was given on April 21 1994 the name Max-Josef-Metzger-Platz.

The redesign in the 1950s included the twelve-meter-high rubble column by Gerhard Schultze-Seehof , which, with 40,000 mosaic stones made from rubble, is supposed to reflect the ideas of slavery, destruction, building or rebuilding Berlin and democracy at the time, each depicted on one side of the stele. It also commemorates the popular uprising in the GDR on June 17, 1953 , when workers from Hennigsdorf had moved through Weddinger Müllerstrasse towards East Berlin .

The stele was made from knocked off bricks in the colors white, yellow, red and sooty black from war-torn, demolished houses in the vicinity. It was given the name Trümmerstele at its official inauguration by the then Mayor of Wedding, Walter Röber, on June 20, 1954. The name refers to both the building material and the occasion, because at the inauguration, the construction work of the rubble women was emphasized.

Another memorial stone was unveiled for the namesake of the square, which was designed and designed by the Berlin artist Ajit Kai Dräger. A square granite column protruding from the ground bears a quote from Metzger: "I offered my life to God for the peace of the world."

In the 2010s, considerations arose to redesign the square. One million euros were available for the renovation as part of the Active Centers funding program . In January 2015 a public competition for the redesign of the square was announced, whereupon in October 2015 the design of the landscape architects bgmr from Berlin and Leipzig was “recommended for realization”. The memorial stone and the rubble stele should remain.

By mid-2017, the rehabilitation costs had risen to 2.5 million euros, mainly due to the clearance of ordnance and the disposal of contaminated sites.

After completion of the preparatory work, the building work for the redesign began in October 2017 according to the concept of the landscape architecture office bgmr under the motto "Move yourself Max!" - A green space in motion.

Following the reopening on June 6, 2019, the triangular square with the character of a park is dominated by the large meadow with the rubble stele that can be seen from afar and the valuable preserved trees. A part in the northeast area is fenced in as a lawn for sunbathing. There are wooden platforms around some trees that serve as seating, but on which some botanical and other information can also be seen.

An information board placed on the main path at the beginning of the 21st century , which gave information about the namesake of the place and some of the plants planted and on which the locations of the steles could be seen, was not put up again.

There are various offers for different user groups around the central green area. In the northeast, the playground was designed using historical materials to encourage children to engage in various activities. In the north-west on Müllerstrasse, a climbing object offers opportunities for children and young people to take action. On the western edge of the square on Müllerstrasse, as in other places on the edge of the square, benches invite you to linger with a view of the green area.

There is a drinking fountain a few steps south . In his contribution "Max-Josef-Metzger-Platz usable in many ways", the author Roland Schnell says: "That would certainly please the alcohol opponent Metzger that everyone can quench their thirst here for free ..."

In general, the design of the square has a lot to do with Metzger's work, who as a Catholic priest primarily did social work .

At the inner edge of the paved path around the square there is a mastic asphalt running route . Not only are meters indicated on it, but also exercises in German and Esperanto . This indicates that Metzger combined his commitment to peace, ecumenism and democracy with the use of the international language Esperanto and its dissemination.

On the south-eastern edge of the square, next to the connection path from Müllerstrasse to Rechtsstrasse, in front of the Job Center Mitte building, the “Turnbar” invites you to do strength and endurance exercises. Exercises that are possible here and safety instructions are given on a board.

On the paved and partially straightened and better lit edges of the patz there are other offers such as the boules area, table tennis tables and trampoline. Small stone paving areas extend the upper strip of the sidewalk into the square. They are structured by green tree islands, seating areas and play elements.

The route , which was confusing before the redesign, is now clearer.

The adjacent residential quarters are easier to reach, including the “silent green” cultural site (formerly: crematorium) in Rechtsstrasse 35 and the Job Center Mitte, Wedding location, Müllerstrasse 16,