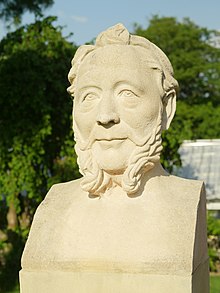 Bust of Gustav Meyers by Albert Manthe in Treptower Park

Johann Heinrich Gustav Meyer (born January 14, 1816 in Frauendorf , Weststernberg district ; † May 27, 1877 in Berlin ) was a German garden and landscape architect and municipal building officer . As the municipal gardening director in Berlin , he was the first to create parks that were intended as recreational areas for ordinary citizens of the city.

Well-known and partly still preserved plans by Gustav Meyer in Berlin are the Volkspark Friedrichshain , the Volkspark Humboldthain , the Treptower Park , the Kleine Tiergarten , the Späth - Arboretum in Baumschulenweg and several promenades. He also designed the road and development plan for the Alsen villa colony in what is now the Wannsee district of Berlin . In Prignitz, he redesigned the palace gardens in Dallmin for the von Jagow family in a landscape style.

He completed his training as a gardener in the Old Botanical Garden . From 1832 to 1836 Meyer studied at the Royal Gardening College at the Wildlife Park near Potsdam , including with Peter Joseph Lenné , for whom he subsequently worked. Lenné then entrusted him completely with the management of technical matters in his office in 1843. Meyer also took on teaching activities in plan and landscape drawing, for projection theory and perspective. Meyer and Lenné implemented the wishes of Friedrich Wilhelm IV and beautified the green areas around Potsdam or created them anew. The design style coined by Lenné, Meyer and their students is often referred to in the history of garden art as the “ Lenné Meyer School ” or “mixed style” (containing both strictly geometric and free landscape forms). In addition to his teaching activity, Meyer also received the position of garden conductor . After winning a tender for the design of the Friedrichshain, this new park was laid out from 1846 to 1848 according to his designs. In 1859 he was appointed court gardener ; he was 1859-1870 court gardener in the Marlygarten district.

After Lenné's death, Meyer was not allowed to take over his office. When a deputation for urban parks and gardens (Berlin Horticultural Office) was formed in Berlin in 1870 , the royal court gardener Gustav Meyer took over its management as the city ​​gardening director of Berlin on July 1st of that year . From 1876 the plans already made by Meyer for Treptower Park were implemented as a Volksgarten.

He died in 1877 and was buried in the New Cemetery on Saarmunder Strasse, today Heinrich-Mann-Allee 25, in Potsdam .

His successor in the horticultural department was Hermann Mächtig (1837–1909).