In 1823 a teaching and research institute for horticulture was founded in Berlin: the Beuth-Thaersche Gewerbeinstitut . The building trade school in Berlin was established in 1878 and the first craft school in Berlin in 1880. The technical school for bricklayers and carpenters followed in 1882. The Max Eyth City Mechanical Engineering School in Berlin had existed since 1892 . All of the above institutions had different locations.

In 1909 the Beuth Engineering School was founded . The Technical Middle School established around 1910 in Wedding , Lütticher Strasse 37-39, was also important for later development . The Charlottenburg trade school was established in 1919, followed by the Gauß engineering school in 1922 . On May 3, 1936, the Higher Graphic Technical School of the City of Berlin was introduced.

The Beuth University emerged from the four Berlin State Engineering Academies founded in 1966:

The United Building Schools of Greater Berlin became the State Engineering School for Building in 1954 .

In 1971, the Technical University of Applied Sciences Berlin was founded, in which further departments and courses of study outside of construction (e.g. food technology ) were combined. These were gradually moved to mostly new buildings on Luxemburger Strasse in Berlin-Wedding . On January 17, 2008, the Academic Assembly decided to rename the Beuth University of Technology Berlin on April 1, 2009.

The technical college is named after the Prussian ministerial official Christian Peter Wilhelm Beuth . He is called the “spiritual father of engineering education in Germany” by the technical college, since in 1821 he initiated the first such school in Prussia with the Technical Institute in Berlin . A report by sociology professor and racism researcher Achim Bühl , which Beuth ascribes a decisive role in the social consolidation of anti-Semitic resentment, brought up the idea of ​​renaming the university again in 2017. On January 23, 2020, the Academic Assembly voted for the renaming with 30 votes in favor, 14 against, with one abstention. A new name is to be found in an internal university process.

Due to the long history of the Beuth University with its different founding elements in different districts, there is no main building. The Beuth house on Lütticher Straße on the campus is the headquarters of the university, as the main administration is located here.

New election of the university management in 2019

In addition to the buildings on the Wedding campus, the university still traditionally uses the technical college building in Kurfürstenstraße in Berlin-Schöneberg and the Forum Seestraße in Osram-Höfe , rooms in a building on Schwedenstraße and a building in Reinickendorfer Wittestraße and the start-up center (Beuth Startup Hub) in Residenzstrasse. 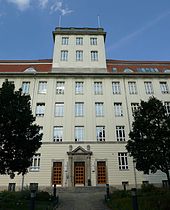 Haus Beuth is the oldest building on campus. It was built between 1908 and 1910 as the 53rd and 300th community school, Diesterweg secondary school and technical middle school by the town planning officer Ludwig Hoffmann with the assistance of the municipal building officer Georg Matzdorff, town building master Straßmann, government building master Salingré and the architects Julius Buchholz and Gerecke. The sculptures were works by Ignatius Taschner .

With its extraordinary size and spatial diversity, the “school palace” is an exception in Ludwig Hoffmann's work and in the school building of the city of Berlin. Often schools were grouped together before the First World War , but only at Zeppelinplatz was there a unique combination of four school facilities of different types of schools. The schools not only use a common location such as the community schools on Antonstrasse, but are also united in a common building without being recognizable as independent units. The castle-like structure at Lütticher Strasse 37–39, Ostender Strasse 39/40, Antwerpener Strasse 15 and Limburger Strasse comprises an entire building block and dominates the surrounding residential area. Its design is reminiscent of the Rudolf Virchow Hospital , which was built by Hoffmann in 1906 and only a few hundred meters away .

Ludwig Hoffmann emphasized the main facade on Lütticher Straße, the wing of the Diesterweg Realschule, with a monumental block-like tower top, which ends flat with a baroque balustrade after two floors. In front of the secondary school wing were two teachers' houses, which, forming an "L" in the floor plan, marked the street corners. After the destruction of the Second World War, only the right-hand teacher's house remains. The 53rd and 300th community schools were housed in the wing on Ostender Strasse. The Technical Middle School, founded in 1909, used the class wings on Antwerpener and Limburger Strasse. In the inner courtyard there is a low transverse structure that served as a laboratory and test workshop for machines. Iron trusses span the hall space, which still houses technical laboratories today. Two gyms on the opposite side of the courtyard corresponded to the transverse building, but they were bombed in 1945. After repeated Allied air raids between 1941 and 1945, teaching had to be stopped and after the total dismantling of the technical facilities it was relocated to Grüntaler Straße. The inventory of the library and the transportable furniture were burned by Russian troops on a large pyre in the inner courtyard of the Beuth house. The wing on Ostender Strasse, which was destroyed in the war, was rebuilt from 1956 to 1957. It is a listed building monument.

The house traditionally houses the departments with a focus on mechanical engineering. The presidium is located in the upstream annex building on Lütticher / Limburger Strasse.

From 1964 the house was the seat of the State Engineering Academy Gauß , which was previously located at Bochumer Straße 8 and is named after the mathematician , astronomer , geodesist and physicist Carl Friedrich Gauß (1777–1855). The building complex was created 1960–1964 by Herbert Rimpl and consists of a 150-meter-long five-story main building, a parallel single-storey laboratory wing and an auditorium . With the reinforced concrete skeleton visible from the outside, the cubic structure and the large windows, the university building is a typical example of modern architecture of the 1950s and 1960s. The auditorium is in front of the main building. A cubic upper storey, closed on three sides, rests on a recessed substructure. The Wedding district had the auditorium, now Max-Beckmann-Saal, converted from 1988-1990 into a multi-purpose hall for concerts and theater events, which today houses the Atze Music Theater . The main building was increased by one storey from 1994–1996 by the Berlin architects Lautsch & Partner. It is a listed building monument.

The Gauß house mainly houses the areas of electrical engineering as well as computer science and industrial engineering.

The Grashof house was built from 1968 to 1973 as an extension to the Beuth house and is connected to it by a transition. It bears the name of the mechanical engineer Franz Grashof (1826–1893), co-founder of the Academic Hut Association , co-founder and first director of the VDI from 1856 to 1890. It consists of a high-rise building with twelve upper floors and the low-rise building in front of which the laboratories electrical engineering and mechanical engineering are housed. The largest lecture hall is also located here, which was renamed the Ingeborg-Meising-Saal on November 20, 2013 and was previously called the Beuth-Saal . Ingeborg Meising (1921–2012) was a mathematician and was appointed to the technical college in 1971 as the first female professor. There is a cafeteria in the basement . Parts of the house were redesigned in 2012. In 2005 a greenhouse (G) for the horticulture course was completed in front of the house.

The building for construction was built from 1972 to 1976 by the architects von Beulwitz and Bonn. It is divided into two longitudinal wings that are connected by three intermediate structures. In the longitudinal wings there are lecture halls, teaching and office rooms as well as the library and the university computer center. The building houses the architecture, construction and geoinformation of the former engineering academy for building Kurfürstenstrasse and Leinestrasse after the merger of the engineering academy to form the Technical University of Berlin in 1971. The distance learning institute, the central departments for research and technology transfer and the center for research and innovation (ZFI) are also located here. Part of the building is also a cafeteria and the canteen , located on Luxemburger Straße.

The former incandescent lamp factory was built between 1904 and 1910 by the architect Hermann Enders for Sigmund Bergmann Glühlampen AG . Further buildings were added in 1912–1914 and 1936–1937. The factory was taken over by Osram GmbH in 1935 , renamed Osram Plant B and expanded to become the largest incandescent lamp factory in Europe. After 1990 the plant was given up and the Osram-Höfe , a multi-use business and commercial center, emerged. The former administration building at Seestraße 64 on the 2nd, 3rd and 5th floors has been used by the Beuth University since 1987 after being converted into laboratories by the TFH. This is where life sciences and medical / physical technology and environmental technologies / sciences are located.

The Kurfürstenstraße building was built between 1911 and 1914 as a building trade school by the city building officer Ludwig Hoffmann and was inaugurated shortly before the start of the war in 1914. War damage made the building unusable, for a long time it only had an emergency roof and one of the side wings was completely destroyed by the bombs. It was not until 1953, after the reconstruction was completed, that teaching could be resumed at Kurfürstenstrasse 141, with a focus on building construction and civil engineering. After the incorporation of the now State Engineering School (or Academy) for Building Industry in Berlin into the Technical University of Applied Sciences, the building departments moved to the Building Department in 1976. The house is used for the food technology department. Today the ophthalmic optics and optometry course is located there. The house is a listed building monument.

With the Wedding Advanced Laboratories a laboratory building for the biotechnological and pharmaceutical courses will be built in the near future. The building is part of the two-site project to close cost-intensive branch offices and is to be built between Haus Grashof and Luxemburger Straße. Construction is scheduled to start in 2020.

The Beuth University is divided into smaller departments instead of faculties . There are eight departments, each with three to nine courses.

As part of the university network Virtual University of Applied Sciences (VFH) , several online courses are offered across national borders.

The Beuth University has a distance learning institute (FSI), which was founded in 1983 as a central institute. A usage fee is charged for its further education distance learning courses. Students in the master’s degree programs also receive student status.

Furthermore, the Beuth University has a central facility for university sports , which is also, for example, the Berlin Olympic training center . In addition, the security staff in local public transport (ÖPNV), the Berliner Verkehrsbetriebe (BVG), are trained here.

Graduates from these and other colleges and universities have had the opportunity to apply for a doctoral scholarship on campus since 2017 . Prerequisites are a supervising professorship from Beuth University and a university, a very good final grade for an academic degree and the majority of research being carried out on the university campus.

In addition to the student body, the General Student Committee (AStA), the student parliament (StuPa) and the student councils (FSR), there are several initiatives and university groups at the university. For example, some architecture students organize themselves as Bautrieb Berlin , while the student initiative Council for Future- Oriented Development (RZE), the university group of the Berlin Committee for UNESCO Work , the students and young engineers of the VDI district association Berlin-Brandenburg , the student initiative for a beautiful university name (AntiBeuth ) , the BEpreneurs , a local Fridays for Future offshoot and the Initiative for Transparency and Communication (ITK) operate across the campus. In addition to the Autonomous Left List (ALL), the Femiliste , Free Beer List , For Transparency in Teaching (FTL) and other students on the general list are currently represented in the StuPa.

The presidium of the student parliament consists of

The AStA has been running its own news portal since the end of 2017 , which is dedicated to student activities at the university.