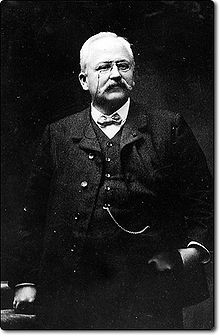 Armand Peugeot (born March 26, 1849 in Hérimoncourt near Montbéliard , † January 2, 1915 in Neuilly-sur-Seine ) was a French entrepreneur and founder of the French car manufacturer of the same name, Peugeot .

Peugeot first started building bicycles and presented the first steam-powered tricycle at the World Exhibition in Paris in 1889 and is considered a pioneer and visionary of automobile construction.

The business activities of the Peugeot family can be traced back to the 15th century. In 1776 the Peugeot family ran a water mill in Herimoncourt and later opened an iron foundry , which formed the basis for the later metalworking company. In addition to clock springs, corset bars and various tools such as hacksaws and saw blades, the company later also manufactured irons and coffee grinders .

Armand Peugeot studied in England and got to know the bicycle there. He recognized the benefits and technical progress of the bicycle and began producing this means of transport, making it known on the European continent. Together with his cousin Eugène Peugeot, he manufactured the velocipede in the family's own workshop from 1882. Just seven years later he was producing 19,000 pieces and with the presentation at the Exposition Universelle de Paris, the Paris World's Fair in 1889 , demand increased so much that he opened a shop in Paris that same year.

In 1889 Armand Peugeot bought the Serpollet steam engines for his first motor vehicles.

Another year later, Peugeot vehicles were equipped with engines from the car manufacturer Daimler-Motoren-Gesellschaft . In 1891 he had one of these so-called steel-wheeled wagons successfully take part in the long-distance cycle tour Paris-Brest-Paris. Peugeot then began to manufacture its own gasoline engines, making it the second oldest automaker in the world. In 1891, Peugeot began series production of automobiles.

When he recognized the technical future of motor-driven vehicles, he founded the Société des Automobiles Peugeot and a production facility in Audincourt in 1885 . In 1906 the company merged with the Peugeot bicycle company to form the Société des Cycles et Automobiles Peugeot . A new plant was opened in Sochaux - Montbéliard and Peugeot now manufactured buses and vans in addition to passenger cars.

Armand Peugeot died at the age of 65 and was buried on the Cimetière du Père-Lachaise in Paris.