Jury Fränkel at an auction in Leningrad

Jury Fränkel (born April 8, 1899 in Moscow , † February 8, 1971 in Lagny-sur-Marne ) was a German tobacco shop and cosmopolitan . He was an outstanding figure in the fur industry . With his work "Rauchwaren Handbuch" on fur animals and their fur types he created the basis for what is still the most important reference work in the industry, "Jury Fränkel's Rauchwaren Handbuch". In the autobiography "One-Way Street" he described his eventful life with two world wars, as a Jew of German origin and a fur trader in his first homeland, Russia, then in the world fur trade center in Leipziger Brühl and then in Sweden, as well as his constant travels to the shops for fur skins. He spent the last years of his life with his family in Paris.

Jury (Albert) Fränkel was born in Moscow in 1899 into a family of tobacco products, three generations before him they had also been trading in fur since 1848 . His father was Hugo Fränkel (* in Moscow; † 1940 in Stockholm), his mother Olga Fränkel nee Schiller (* in Germany; † 1954 in Stockholm). Shortly before he was born, his parents had moved from Leipzig with the local fur trade center in Brühl , where the family had been based since 1848, to the Russian capital. The wealthy family had contact with prominent artists of the time, his attractive mother Olga was often portrayed by internationally known painters, including Leonid Pasternak (father of the Schiwago author Boris Pasternak ), Ernst Liebermann and Filipp Andrejewitsch Maljawin . At the age of 15 he accompanied his father on trips to Nizhny Novgorod and the other centers of the fur trade.

With the beginning of the October Revolution , the father, interned in Siberia during the First World War (1914 to 1918), managed to escape to Germany together with his son Jury, the mother and siblings had already been allowed to leave the country. The family settled again in the tobacco metropolis of Leipzig. After his arrival, the jury voluntarily took up military service in the Royal Saxon Infantry Regiment 134 Plauen, but was no longer used because the war was soon to end. Then he began with the recently acquired by his father training at the company Robert Meyer & Co. his career as Head Shop Kaufmann . A residential address at Michaelisstrasse (Hauptzollamtstrasse) 3 is occupied in Leipzig in 1928. The tobacco retailer Richard Franke described his impression when he met Fränkel for the first time in Leipzig, around the 1920s: “A young, dark-haired man of almost the same age, always friendly, flexible, ready for any work and to please and not particularly slim ... "

In London with the Garlick Hill fur trade center , the jury worked for the Continental Fur Traders company . His father went to Stockholm as a representative of the Leipzig fur trading company J. Ariowitsch , where his son followed him. In 1926 Jury returned to Leipzig, initially as a representative of the Hudson's Bay Company . He later became a representative of Sojuzpushnina , a Russian state-owned company with the monopoly of marketing the fur pelts produced in Russia, in particular as an auction house. Father Fränkel founded the companies Hugo Fränkel & Co, Stockholm and Hugo Fränkel & Co, Buenos Aires with Ariowitsch . In the global economic crisis the company had Ariowitsch liquidate and father Frankel lost more than half a million Reichsmark, which it almost ruined (Max Ariowitsch was after the war, President of Anglo American Fur Company , which at that time was probably the largest purely private tobacco products company in the world). The jury stayed in Leipzig until 1931 - where he was already considered "one personality" at the time - and then finally settled in Sweden. From there, apart from Scandinavian customers, he traded a lot with customers in Germany and Italy, where fur fashion was experiencing a major boom at the time. From 1932 on there was no tobacco auction in Stockholm or Leningrad in which Frankel would not have participated. At the 50th anniversary auction of the Sojuzpushnina, Fränkel was honored as one of the two tobacco retailers who have attended all Leningrad auctions from the start. At the 200th anniversary auction of Sojuzpushnina in April 2016, he was thought of again posthumously: "His buyer number 99 was as legendary as himself". He was also at home on the other fur trading places. In Sweden he was committed to building a powerful fur industry. The Swedish Fur Fashion Group was founded on his initiative .

Father Hugo Fränkel with fur traders during the market in Kurgan , Siberia (1900)

Together with Hussein Umerkajeff, he opened the company Svensk-Engelska-Skinnförmedlingen (Strandvägen 7 c). In 1939 he set up his own company again in Stockholm. He later moved to the Swedish "fur town" Tranås . The following year his father Hugo dies in Stockholm after a long stay in South America. 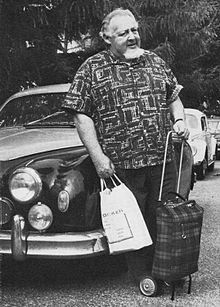 Jury and his legendary Jaguar (Murrhardt, 1968)

A relative of the family, Abisch Fränkel, still existed in Leipzig, Brühl 69, until the company was liquidated by the National Socialists. In the war years 1942 Jury Frankel has German citizenship revoked and he was instead of his previous passport for stateless refugees and emigrants ( Nansen passport ) Swedish identity papers. In 1947 he married Hélène Bernstein and moved with her to Paris. The daughter Anne Hélène was born in 1948 and the son André was born in 1951.

Jury Fränkel was also active as an author for specialist journals in German, Swedish and other countries. His reports of the fur auctions and the always moody situation with a huge ups and downs at the fur market were written extremely entertaining. In addition to his humor and his numerous publications, his impressive appearance, with a strong body, later also a chin beard, contributed to the fact that he was already considered the veteran and original of the fur industry during his lifetime. He was wanted as a keynote speaker and the highlight of every professional event. As an industry award, he received the “Golden Fur Moth”, for the future awards of which he took over the general secretariat. He made his travels with his Jaguar, legendary in the industry . On his 70th birthday, Per Tage Larsen gave him a Volvo at a Copenhagen auction , for which his colleagues in the industry had collected.

Here from a memory from an industry member:

“A delicious, palpable irony struck him from every buttonhole. [...] Jury Fränkel was at peace with himself and the world. Where could this tall, heavy man get the energies from to make other people happy from the heart. [...] His goodness, his philanthropy, his whole attitude arose from the knowledge of the paradox of life. Why was Jury Fränkel so good at telling jokes? Because he even mastered the technique of storytelling. He never presented his jokes naked. He increased the anticipation of the joke so much that one laughed even before the punch line came. He enjoyed building funny facades, using funny details that were not strictly part of the joke's content. His language consisted of comparisons, which he loved and often used. [...] He was a man of the ear, as was said in ancient times. He hung on the sound of words and on the poetic play of concepts. Even the most frivolous joke he told was still socially acceptable due to the art of his expression. "

The last ten years of his life were closely associated with the Franke family in Murrhardt, Swabia. Frankes not only ran a fur processing company and a tobacco shop, but also the small Rifra publishing house (which Fränkel helped set up), which on the one hand published and later developed Fränkel's tobacco products book, whose trademark, however, was the fur moth , the "only literary and humorous industry magazine of the world ”, as she described herself, undisputed until the end. Richard Franke, with whom Fränkel had known for 50 years, provided him with a study and his extensive fur archive in Murrhardt. Fränkel came here again and again from Paris and wrote “one-way street” on his résumé.

In February 1971, Jury Fränkel suffered a heart attack on the express train 50 kilometers behind Paris on the way to Murrhardt, where he wanted to make final corrections to his autobiography. He died at the age of 72 in Lagny-sur-Marne hospital and was buried in the Père Lachaise cemetery in Paris . 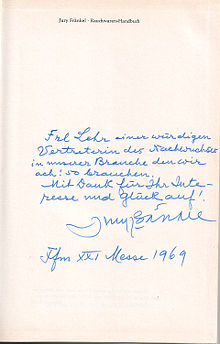 "Miss. Teaching a worthy representative of the next generation in our industry whom we oh! so need. Thanks for your interest and good luck! Jury Fränkel. Ffm XXI Messe 1969 "(Dedication for a young furrier in the tobacco manual )

Almost all of Fränkel's Jury publications dealt with the fur industry. In addition, he also translated Anton Chekhov's Cherry Orchard from Russian into Swedish (premiered in Sweden with the then unknown actor Ingmar Bergman ), played theater himself and directed at various Stockholm theaters. Under the pseudonym Jura Tamkin he had great public success, especially with the staging of Russian classics. In this capacity he also worked for the “Jewish Amateur Theater”.

Frankel's time as a writer also began in Stockholm. The first edition of his first work "Rauchwaren Handbuch" appeared in 1960 (copyright Jury Fränkel, Paris, XVIe Rue Massenet 14), and a Swedish version followed. The other editions were published by Murrhardter Rifra-Verlag, the second edition in 1965 was illustrated for the first time with the fur animals typical of the book on postage stamps. Jury Fränkel began translating the work into English, French and Italian. In 1977 a Japanese textbook by H. Terada was published, based on Jury Fränkel's smoking manual, also with the introductory illustrations of the fur animal stamps.

It became the standard work of the fur industry, which is still unreached today, thanks to the fundamental revision by Christian Franke and Johanna Kroll (* 1909; † June 14, 1984). They gave the work the scientific foundation and expanded it to include the most important current facts and figures from the fur industry. The book title was now “Jury Fränkel's Smoking Handbook”. In the end, not much remains of the original work by Jury Fränkel. The 9th edition had a circulation of almost 10,000 copies. The last published, revised and supplemented 10th edition bore the year 1988/89.

Fränkel developed a reference aid for Persian skins that contains all Persian varieties, their names and descriptions, as well as a mink card that shows and explains the origin of the individual color mutations .

He wrote articles that are printed by the journals Courrier de la Fourrure , Fur Bulleton , Fur Review , Fur Weekly News , Pälsjournalen , Die Felzwirtschaft , Rund um den Fur, and Die Felzmotte . His publications were "not just current market reports and analyzes, but also woven-in history, seasoned with glosses from his 50 years of industry experience and they are always amusing and funny".

The International Fur Trade Federation commissioned Fränkel for a glossary, an eight-language dictionary for the fur industry. He was able to accomplish this just before his death. His memoirs, published posthumously in two volumes, remained incomplete, ending in the early 1930s.

Per Tage Larsen, a friend of Fränkel's, reminds in his obituary that the front seat in the shuttle bus from the hotel to the auction house was always left free for Jury Fränkel, nobody would have dared to take a seat there: “How you sat there and the half Bus in German, English, French, Russian, Italian, Swedish and whatever else - in anticipation of the coming day, we all knew that you were at home there. [...] The chair in the bus will now remain empty [...] " 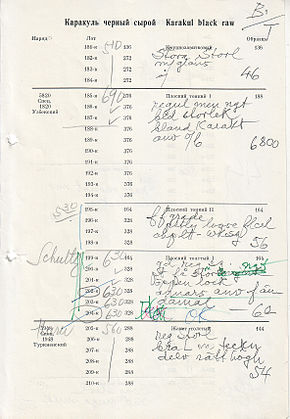