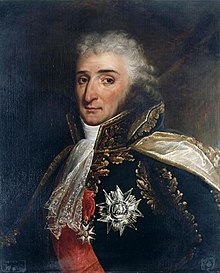 Born as the son of a French bricklayer and a German fruit seller named Marie-Josèphe Kreslin in the Paris suburb of St. Marceau, Augereau joined the Régiment Royal-Bourgogne cavalerie as a carbineer in 1774 , but deserted in 1775 due to illegal fencing duels and then served in the Russian army , in the Prussian Army with the Prince Heinrich Regiment and most recently in Naples , where he earned his living as a fencing master since 1787. When all the French had to leave Naples in 1792, Augereau was one of the first volunteers to join the French Revolutionary Army. His unit fought the Vendée uprising in April 1793 . But after many soldiers joined the rebels there, the officers, including Augereau and François Marceau , found themselves in prison. After his release he was briefly aide-de-camp with General Jean Antoine Rossignol and was then assigned to raise recruits in Toulouse for General Jean-Antoine Marbot , with whose family he became friends. In the same year he was general de division in the Armée des Pyrénées orientales , where he won several easy victories over the Spaniards in 1794 and 1795.

Despite a lack of education, he had a restless striving to move forward and at the same time had great boldness. He showed this in particular in 1796 as corps commander of the Italian army in the battle of Millesimo and in the battle of Lodi . Sent to the Papal States by Napoleon Bonaparte , he took Bologna , suppressed an uprising in Romagna and urged the Pope to make peace. Called back to the main army, he defeated Dagobert Sigmund von Wurmser on August 5th at the battle of Castiglione , then with André Masséna on November 6th, Alvinczy near Carmignano . He also contributed significantly to the victory at Arcole and defeated Giovanni Provera at the gates of Mantua .

In August 1797, after he had enriched himself through blackmail, he returned to Paris , where he was appointed commander of the Paris military division and carried out the coup d'état of the 18th Fructidor V (September 4, 1797) with brutal violence. However, contrary to his expectations, he was not elected to the board of directors . As the successor to General Hoche , who had died shortly before, in October 1797 he became General in Chief of the Rhine-Moselle Army and the Sambre-Maas Army (later Armée d'Allemagne) and head of civil administration for the occupied lands on the left bank of the Rhine. The directorate commissioned him to promote the integration of this area into the French national territory. Augereau, "  un de plus brillants parvenus de la revolution, bon tacticien, batailleur intrépide, mais tête creuse [...] avec un panache de tambour-major ...  " was overwhelmed with this task. Napoleon Bonaparte, who valued him as a daring soldier, had previously criticized his promotion to head of a large army and civil administration as a grossly wrong decision by the political leadership in Paris. Jealous of Napoleon's successes, he is said to have thwarted the peace of Campo Formio and, together with German Jacobins, planned to blow up the Rastatt Congress and instigate a revolt to form an independent south-west German republic - for which he was to be regarded as the founder. Augereau was then recalled on January 29, 1798 and transferred to Perpignan , which amounted to a demotion.

With vain arrogance he himself strove for the highest power in France and was therefore elected a member of the Five Hundred in Paris in 1799 .

But he had neither the skill nor the courage to set his plans in motion, and after the 18th Brumaire he submitted to his rival Bonaparte . Appointed commander-in-chief in Holland , he led the Franco- Batavian (Dutch) corps on the Middle Rhine to support Jean-Victor Moreau's operations in southern Germany, advanced to Würzburg via Frankfurt and fought several battles with the enemy, but these did not turn out to be decisive. After the Peace of Lunéville (1801) he lived on an estate near Melun , until in 1803 he was given supreme command of the army destined against Portugal . Since this army did not move out, he stayed in Paris, was appointed Maréchal d'Empire in 1804 and in 1805 was given the honorary title of Duke of Castiglione . In the war with Austria in 1805 he invaded Vorarlberg at the head of an army corps , where he forced Franz Jellachich to surrender near Dornbirn .

During the campaign of 1806 against the Kingdom of Prussia, he worked on October 14th as commander of the left wing in the victory at Jena . The 17,100 strong VII Corps was subordinate to him there.

On February 7, 1807, he advanced with great bravery near Eylau , but got lost with his troops, so that when the Russians attacked, his corps was almost completely wiped out and he himself was wounded. The emperor then sent him on a longer convalescent leave to France.

In June 1809 he received from the Emperor instead of Gouvion St. Cyr the supreme command in Catalonia , did not take up the post until autumn because of a gout disease, which he cured in Perpignan . After the fall of Gerona (December 11, 1809), however, he achieved no further success. Napoleon recalled him from Spain and replaced him on April 24, 1810 by Marshal Jacques MacDonald . In the campaign against Russia of 1812 he was given command of the XI. Army corps, which was formed in Berlin . In the late summer of 1813, as Governor General of Frankfurt and Würzburg , he gathered a reserve army, which strengthened Napoleon's main army in Leipzig . In the Battle of the Nations near Leipzig (October 16 to 18), his troops were characterized by great steadfastness and perseverance.

After the Allied invasion of France in the spring of 1814, Augereau formed an army at Lyons , but in March, when he foresaw Napoleon's fall, began negotiations with the Austrian General Bubna and Littitz , which led to the surrender of Lyons on March 21. Augereau dismissed his troops with the following order of the day: “Soldiers! You are released from your oath ... be it by the abdication of a man who, after sacrificing thousands upon thousands of his cruel ambitions, did not even know how to die as a soldier. Let's Louis XVIII. Swear loyalty, let's put on the real national color! ” Augereau thus contributed to the first abdication of the emperor, which he covered with the most harsh expressions. He was appointed by the king to be a member of the council of war, knight of St. Louis and peer of France . In March 1815 he received the supreme command of the 14th Division d'infanterie in Caen .

Although Napoleon called it a traitor after his return from Elba , Augereau paid homage to the emperor in an appeal to the 14th Division, but never regained Napoleon's trust, which he had never possessed to a high degree. After the second restoration , Augereau re-entered the chamber of peers from which Napoleon had expelled him, and became a member of the court martial , which was supposed to try Marshal Michel Ney , but declared that it was not responsible.

Charles Pierre François Augereau then retired to his La Houssaye estate , where he died on June 12, 1816.

Augereau received few positive reviews in the military literature and biographies of the 19th century: "A vain, ambitious, but clumsy and completely uneducated condottiere ". His greed, which he exercised in the conquered countries with no decency or undignity, was notorious. Napoléon I is said to have used it often only out of sentimental memory of brilliant combat missions during the Italian campaigns in 1796/97 . After the winter battle at Eylau in 1807 (see also above), Napoléon no longer gave him any important responsibilities.

His name is entered on the triumphal arch in Paris in the 23rd column.