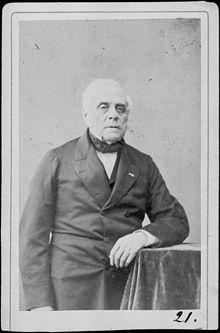 Auber did a commercial apprenticeship in London at the instigation of his parents . When he returned to Paris in 1803, he was encouraged by Luigi Cherubini to compose music for the stage. He achieved his breakthrough in 1820 with his opera La bergère châtelaine ( The Shepherdess as Noble Lady ). In 1842 Auber became director of the Paris Conservatory and finally in 1857 " Imperial Kapellmeister ". Auber died in Paris at the age of 89. He rests there in the Père Lachaise cemetery .

Auber was born in Normandy, where his parents traveled from Paris. It was designated for the trading post by his father, a wealthy art dealer in Paris. As a hobby he also played music, and the compositions in which he tried his hand (romances, cello concertos for the cellist Jacques-Michel de Lamare , trios, also an operetta, etc.) were received with approval.

A change in his father's circumstances finally compelled him to make music his career in life. He underwent careful studies at the Conservatory under Luigi Cherubini's direction, after which he first composed a mass (from which individual pieces later merged into the opera Die Stumme von Portici ) and then brought several small operas to the stage, which, however, received little attention.

It was only with the comic opera La bergére châtelaine (1820), for which Feydeau had provided the text and Rossini , who at the time enchanted everything, had served as a model, that he began to please. The greatest advantage for Auber was his connection with Eugène Scribe , who wrote the lyrics for him and, in terms of type and direction of talent, suited him completely.

This was followed by operas such as Emma , Léocadie and Leicester , which were also successful, but not known much beyond France. The first opera that made Auber's name very popular in Germany (especially through Henriette Sontag's mediation ) was Der Schnee (1823).

His bricklayer and locksmith had even greater success the following year . After performing a few other operas, such as Fiorilla (1826) and The Bride (1827), which are characterized by appealing parts, but generally lacking strength, Auber entered in 1828 with his main work La muette de Portici (German: Die Stumme von Portici ) which made a triumphal procession through the world and placed him at the head of the new direction of French great opera.

Auber's next performance, the delightful comic opera Fra Diavolo (1829), also became a favorite of the audience. In his numerous later works Auber did not reach this height again; the routine got out of hand, the pursuit of effect with the often ingenious use of external means came to the fore. For example in his great operas Gustav or the Masked Ball (1833), Der Feensee (1839) and in the comic operas Die Gesandtin (1836), The Black Domino (1837), The Crown Diamonds (1841), Carlo Broschi or the Devil's Share (1842) ), Haydée (1847) and Die Cirkassierin (1861).

Auber's grave in the Pere Lachaise cemetery in Paris

Auber, made a Knight of the Legion of Honor in 1825 , became a member of the Academy of Fine Arts in 1829, in 1842 director of the Paris Conservatory in place of Luigi Cherubini , in 1847 commander of the Legion of Honor and in 1857 received the honorary title of imperial court conductor. With his opening music for the London World's Fair in 1862 , he had to stand back from Giacomo Meyerbeer . After a break of several years from his activity, shortly before his death he surprised the world with three new operas: La fiancée du roi de Garbe (1864), Le premier jour de bonheur (1868) and Réves d'amour (1869), which in spite of this many charming details could only achieve a respectable result.

Auber died in Paris on May 13, 1871, after he had resigned a year earlier from the direction of the conservatory, for which he had made notable contributions. He left behind over 40 operas in total.

Completely the child of modern Parisian culture, he created the operatic form that corresponded to Scribe's pleasure and intrigue and thus to capital city life and taste, and in which the expression of simple, natural sensation had to take a back seat to the elegant conversational tone.

It is understandable that this light genre (whose most successful productions Maurer und Schlosser and Fra Diavolo can be described as) the skill of French opera singers is just as indispensable as the virtuosity of Italian singing in Rossini's opera.

The Mute of Portici stands quite isolated among Auber's great and serious operas . With this work, the sound poet stepped out of the frivolous life of pleasure in Paris onto the hot soil of a politically agitated time and knew how to illustrate significant situations through music. In Auber's will there was a price of 5,000 francs, which is to be given out every year for the best comic opera.

Auber is the namesake of the rue Auber in Paris, which connects the place de l'Opéra with the rue du Havre , and the v. a. from the Auber station on line A of the RER regional express network .