Viktor Andrijowytsch Yushchenko ( pronounced ? / I ; born February 23, 1954 in Khorushevka , Sumy Oblast , Ukrainian SSR ) is a Ukrainian politician. He was Prime Minister of Ukraine from December 1999 to May 2001 and President of Ukraine from January 2005 to February 2010 .

Viktor Yushchenko was born in 1954 in the village of Khorushevka ( Sumy Oblast ) to a couple of teachers. Like several thousand Soviet prisoners of war from the Second World War, his father was imprisoned in the German concentration camps of Auschwitz and Flossenbürg .

In 1975, Yushchenko graduated from the Financial Engineering Institute in Ternopil . There he worked in the department for Marxism-Leninism . He then worked for two months as an accountant in a collective farm in Ivano-Frankivsk Oblast . After serving in the army, he worked from 1976 to 1985 in a branch of the state bank in the village of Uljaniwka in his home region of Sumy, initially as a department economist and from 1977 as a department head. From 1985 to 1987 he was deputy head of department at the State Bank in Kiev, responsible for agricultural issues such as collective farm loans and financing. At the end of 1987 he moved to the Ukrainian republic headquarters of the Agroprombank of the Soviet Union ; from 1990 he was deputy head of department at the Ukrajina Agricultural Bank in Kiev, which was organized as a commercial joint-stock company . He joined the Communist Party at the age of 21 and remained a member until the collapse of the Soviet Union in 1991.

From January 1993 to December 1999, Yushchenko was President of the National Bank of Ukraine . In 1998 his dissertation on the development of money supply and demand in Ukraine was published. Yushchenko has received international praise for successfully combating inflation and in 1997 received the Global Finance Award as one of the five best banking professionals worldwide.

Viktor Yushchenko was Prime Minister of Ukraine from December 22, 1999 to May 29, 2001. He initiated market reforms, was considered the father of the stable Ukrainian currency, the hryvnia, and made a name for himself in the fight against corruption . He lost his office through a vote of no confidence in parliament. Yushchenko's successor in the post of prime minister was Anatoly Kinach of the Party of Industrialists and Entrepreneurs of Ukraine (PPPU).

From May 2002, Yushchenko was a member of parliament and parliamentary group leader of the opposition party Our Ukraine (Ukrainian Наша Україна / Nascha Ukrajina ). From June 2002 he was a member of the Committee on Citizens' Affairs, National Minority Issues and International Relations. He also worked on various non-state committees and maintained close relationships with the supporters of the Rose Revolution in Georgia.

As a candidate for the opposition bloc Our Ukraine , he received the highest number of votes on December 26, 2004 in the re-run of the runoff election for president. The first runoff election was declared invalid due to massive electoral fraud after weeks of peaceful protests, the so-called " Orange Revolution ". On January 20, 2005, the Supreme Court upheld his election victory. On January 23, 2005, he was sworn in in Kiev to succeed Leonid Kuchma as president. Although he did not come from western Ukraine, Yushchenko received the greatest political support there.

Yushchenko received several prizes, for example the medal of the city of Athens , honorary citizenships of Ternopil and Lviv, and two honorary doctorates. In January 2005 he was nominated for the Nobel Peace Prize by US Senator Hillary Clinton .

His first marriage was to Switlana Kolesnyk (Ukrainian Світлана Колесник). While studying in the USA in 1993, he met the Ukrainian-born American Kateryna Tschumachenko (Ukrainian Катерина Чумаченко), who had worked in the Reagan and George HW Bush administrations in the State Department and in the Treasury Department and at the time was a representative of the Barents Group of KPMG Consulting LLC in Ukraine. She came to Ukraine as a representative of the US-Ukraine Foundation and sat on the committees of the neoconservative think tanks “New Atlantic Initiative” (together with the Polish Foreign Minister Radosław Sikorski ) and the “ Heritage Foundation ”. He is married to her second marriage. From the two marriages, Yushchenko has three daughters and two sons and two grandchildren. The youngest son was born on March 25, 2004. 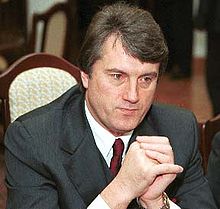 Viktor Yushchenko 2000 - before his poisoning

In September 2004 Viktor Yushchenko suffered dioxin poisoning , in the course of which his face was disfigured and his organs were critically attacked. The first signs of poisoning were noted on September 6, 2004, after Yushchenko was hospitalized. The day before, he had had dinner with Ihor Smeschko , the head of the Ukrainian domestic intelligence service , and his deputy Volodymyr Sazjuk at Sazyuk's dacha .

During the night after this meeting, the first symptoms of poisoning appeared: Yushchenko suffered from abdominal and back pain, facial muscles were paralyzed, he often vomited. Four days later he was brought to the Rudolfinerhaus in Vienna . The doctors there found inflammation in the stomach, small intestine, pancreas and ear. The liver was swollen and one facial nerve was paralyzed. Since then he has also suffered from the effects of chloracne . In an interim report dated September 16, the doctors suspected that the cause was “chemical substances that are usually not found in food”. The director of the clinic, Professor Lothar Wicke, distanced himself from this diagnosis and stated that he had received death threats from "Yushchenko's people" as a result of this assessment.

Yushchenko was unable to participate in the 2004 presidential campaign for four weeks. Nothing was officially known about the reasons, but the first reports of possible poisoning were circulating. In Vienna he had a second treatment from September 30th to October 10th; but only on December 11th, after a further examination, did the treating physicians in the Rudolfinerhaus announce that Yushchenko had been poisoned by dioxins . According to her, his blood and tissues were found to be at least a thousand times the normal concentration of dioxins. According to a scientific study from August 2009, the dioxin concentration is even said to have been 50,000 times the normal value. Accidental poisoning could be ruled out due to the purity of the dioxin - it was a poison produced in a laboratory and therefore it was administered on purpose.

From December 2004, Yushchenko was treated by a Swiss team of doctors led by Professor Jean-Hilaire Saurat, a dermatologist at Geneva University Hospital . This only became known in June 2008, when the doctors, at Yushchenko's request, gave information about the treatment of their patient. According to this, the Ukrainian presidential candidate was poisoned with 2 to 5 milligrams of dioxin. The fact that he did not die from it was partly due to the fact that he vomited shortly after taking the poison. To remove his scars, Yushchenko had to undergo 26 operations under general anesthesia within three years. The team of doctors also discovered an enzyme that breaks down dioxin. In 2008, 90 percent of the dioxin was removed from the patient's body. Yushchenko, according to his own statements, kept the operations secret in order not to give the people the impression that they were weak.

According to Yushchenko, the poison was administered in the rice. To date, there is no reliable information about who poisoned Yushchenko. After the Viennese doctors assumed in December 2004 that it was ingested by mouth as well as third-party negligence, the Ukrainian public prosecutor's office opened an investigation. Yushchenko himself had initially voiced the suspicion that he had been poisoned by the Ukrainian authorities who had intended to politically eliminate him. In an interview with the news magazine Der Spiegel in September 2009, Yushchenko accused Moscow of allowing the suspect - Sazjuk, someone from the waitress and a cook - to stay in Russia in order to protect them and thus to be involved in the crime. In March 2018, when asked by the BBC whether President Putin was involved, Yushchenko replied that he had an answer to that, but that he would not utter it. Europe should recognize that the greatest threat to its citizens is a Russia employing medieval methods in the 21st century .

Politics as President from 2005

After his election as president in early 2005, Yushchenko became president of a politically divided country. The majority of the south and east of Ukraine voted for its defeated opponent Viktor Yanukovych, who is strongly supported by neighboring Russia .

Yushchenko failed to turn the trust gained during the “Orange Revolution” into political success. Less than a year after taking office, Yushchenko and his closest political companion Yulia Tymoshenko fell out . He dismissed her as Prime Minister after seven months in office in September 2005. There was no reconciliation between the Yanukovych opposition and the government. Political life was largely blocked several times over a period of weeks and months. In addition, Yushchenko's fight against corruption in the country was unsuccessful.

The political stagnation was helped by the fact that the powers of the President, Prime Minister and Parliament are not clearly delimited in the Ukrainian constitution . In addition, Yushchenko had to enter into a government alliance with Yanukovych after the 2006 parliamentary elections . This did not last long: on April 2, 2007, Yushchenko dissolved parliament and announced early elections because the majority in parliament around Prime Minister Yanukovych wanted to "seize power and establish its rule forever". After the new parliamentary elections , the “orange coalition” was re-launched in December 2007 with Julija Tymoshenko as prime minister. The duo Yushchenko / Tymoshenko quickly lost themselves in a paralyzing battle of strength.

Domestically, he positioned himself as a sharp opponent of the Russian language in Ukraine and supported a comprehensive Ukrainization of the education system, which met resistance in the Russian-speaking regions of the country. At the international level he wanted to bring Ukraine closer to the European Union ; he had the visa requirement for citizens from the EU and Switzerland lifted. But Ukraine did not have the prospect of membership in the EU.

In the conflict between Russia and Georgia, which finally culminated in the Caucasus War in 2008 , Yushchenko supported the Georgian government of Mikheil Saakashvili . In July 2008, troops from Ukraine, along with the US military , troops from Georgia, Armenia and Azerbaijan, began military maneuvers at Vaziani . After Yushchenko had already supported Georgian President Mikheil Saakashvili, who also studied in the USA, in his election campaign in 2007, he traveled to Tbilisi on a solidarity visit after the start of the hostilities .

Yushchenko vigorously pursued Ukraine's accession to NATO . Although the alliance has declared its general willingness to accept the country on several occasions, Ukraine was not given any concrete prospect of membership.

Controversial memorial plaque for Jaroslaw Stezko in Munich, which was arranged by Viktor Yushchenko

During his tenure, Yushchenko advocated honoring members and activists of the Organization of Ukrainian Nationalists (OUN) and the Ukrainian Insurgent Army (UPA), which met with international criticism. In October 2007, Yushchenko awarded the controversial UPA officer Roman Schuchewytsch the title Hero of Ukraine on his 100th birthday . He also awarded Stepan Bandera the honorary title on January 22, 2010.

Failed in the 2010 presidential election

In the 2010 presidential election , Yushchenko came 5th in the first ballot on January 17 with 5.45% of the vote - the worst election result for an incumbent president in Ukraine's history. Opposition leader Yanukovych succeeded him as President of Ukraine on February 25, 2010.

When Yushchenko's party Our Ukraine (Nascha Ukrajina) received only 1.11% of the votes in the parliamentary elections in 2012 on October 28 and thus clearly missed entry into parliament, observers suspected the end of his political career. Many neutral viewers described the Orange Revolution as a failure even before it was voted out. Former political companions like Yury Lutsenko were also disappointed with Yushchenko's tenure in office.

Wikinews: Viktor Yushchenko  - on the news

Prime Minister of Ukraine (since 1991)

President of the National Bank of Ukraine