The title of this article is ambiguous. Further meanings are listed under Jean Giraud (disambiguation) . 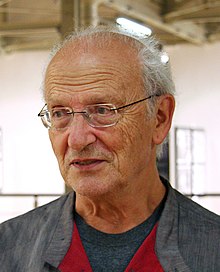 He signed his classic western comic Lieutenant Blueberry with Gir . In addition, as Moebius , he created comics that can be assigned to fantastic literature and are characterized by associative visual language and experimental narrative techniques. Giraud also worked on the equipment design of some films.

Jean Giraud's parents separated when he was three years old. He grew up with his grandparents. In 1955 he made his first trip to Mexico and visited his mother, who had moved there with her Mexican partner the year before. He stayed with her for eight months and traveled the country during that time. The landscapes of Mexico, the desert and the colors had a strong influence on his work. After studying applied arts at the Académie des Beaux-Arts in Paris, Jean Giraud published his first comic in 1956 in Far West magazine . More western comics appeared in various other magazines. From 1958 he did military service in Germany and Algeria for 27 months .

In 1961 he became Jijé's assistant and worked on an episode of Jerry Spring for Spirou magazine . From 1963 he worked on the series Lieutenant Blueberry . In 1965 he again traveled to Mexico for six months, interrupting the work he had begun on Blueberry in 1963 . In 1967 Giraud married Claudine Conin, a daughter was born in 1969 and a son in 1972. With Philippe Druillet , Jean-Pierre Dionnet and Bernard Farkas, Giraud founded the publishing house Les Humanoïdes Associés ( The united humanoids ) in 1975, which published the magazine Métal Hurlant - as an offshoot in the USA in 1977 as heavy metal, later as heavy metal in Germany - brought out. As Moebius, he made three contributions for the first edition alone. Métal Hurlant placed an emphasis on all kinds of science fiction , works emerged that are considered to be groundbreaking for all of comic art.

From 1979 Giraud established relationships with Jean-Paul Appel-Guéry, who allegedly had contact with extraterrestrials who wanted to save parts of humanity from the impending end of the world. He moved to Tahiti with his family in 1983 and lived in the sect community until 1985. After living in Japan and Los Angeles, Giraud lived in France again after separating from his first wife and marrying Isabelle Champeralle in 1988. After a long illness, he died on March 10, 2012 in Paris.

In collaboration with copywriter Jean-Michel Charlier, Giraud drew the western series Fort Navajo for the comic magazine Pilote from 1963 ; since 1966 the series was continued as Lieutenant Blueberry and tells the adventures of the title hero in a very realistic style. In the first episodes, the appearance of the title hero was still very much based on the French actor Jean-Paul Belmondo , the drawing style initially hardly differed from that of Jijés, and so it was not noticeable that he helped out in 1965 in the episode Das Halbblut and about a Third of the drawings made. Charlier and Giraud further developed both the narrative technique and the drawings. The storylines and people became more complex, the narrative strands could no longer be represented on the usual 48 album pages, so that individual episodes took up to eleven albums to complete. Giraud partly broke away from the traditional structure of the panels and created large panoramas with detailed landscapes.

The series made Giraud internationally known and after Charlie's death in 1989 he also took over his part and continued it alone. There were two spin-offs , Colin Wilson created La Jeunesse de Blueberry ( The Youth of Blueberry ) in 1985 , which predates the Giraud series, and in 1991 Giraud published the Marshal Blueberry series with William Vance , which introduced an aged title hero.

In addition to Lieutenant Blueberry , Jean Giraud also wrote and / or drew other adventure comics under his real name such as Jim Cutlass (1979 f.), Le Cristal Majeur (The Great Crystal) (1986) and others.

With the signature Mœbius, Jean Giraud developed his inclinations for the fantastic , science fiction and experimental narrative techniques. He borrowed the pseudonym from the German mathematician August Ferdinand Möbius , whose Möbius strip connects the front and back of a strip to form a single surface.

As early as 1963, Giraud drew some satirical short stories for Hara-Kiri magazine (such as The Hunt for the French on Vacation ), which he signed with Moebius. As he said in an interview in 1987, they reflected his enthusiasm for MAD magazine and its cartoonists Will Elder and Harvey Kurtzman . Because of the regular work for Blueberry , no other comic book publications than Moebius followed for a few years. In 1969 he illustrated some science fiction books published by Editions Opta . After the four- to five-page, black and white held stories L'Artefact , Barbe-Rouge et le Cerveau Pirate and Il ya un prince charmant sur Phénixon published with the signature Moebius, was released in 1973 with the seven-page La Déviation (dt . the detour ) in Pilote the first sci-fi vision, although still signed "Gir", the regular work of Moebius as a counterpart of Jean Giraud initiated. Both the jittery-looking lines and the structure of the narrative, which is about a nightmare-like vacation trip, differed greatly from the detailed work at Blueberry .

Arzach appeared in the first editions of Métal Hurlant in 1975 , the album was released in 1976 and broke with the traditional rules of comics by changing the name of the series character from the second episode on. Arzach becomes Harzak, Harzack, Arzack and Harzakc. Moebius dispensed with speech bubbles and explanatory text, dialogues were only used on the last page of the last episode. In 1976 Giraud introduced the character Major Grubert , a demiurge who seems to be a double of Giraud, in Garage hermétique (Eng. The Hermetic Garage of Jerry Cornelius ) . The series, whose nested narratives are enigmatic, contradicting and erratic , appeared until 1979 and received a sequel in 1995 with L'Homme du Ciguri ( Eng . The man from the Ciguri ).

Moebius got to know the Chilean writer and film buff Alejandro Jodorowsky when he wanted to win him over for a film adaptation of Frank Herbert's Dune (The Desert Planet) . Together they first developed the comic The Cat's Eyes in 1978 and, from 1980, the science fiction series John Difool for Métal Hurlant , a six-volume space saga about a little detective who becomes the hero of the galaxy. Moebius used several of the figures that had already been conceived for the failed Dune project. For advertising purposes, the car manufacturer Citroën commissioned Moebius in 1983 with the album Sur l'Etoile, une Croisière Citroen , which formed the beginning of the series Die Sternenwanderer .

In addition to the work planned from the outset for publication in magazines or albums, Moebius used notebooks in which he recorded individual drawings and ideas, sometimes even entire stories. Individual drawings and also some complete editions of these booklets called “Carnets” have been published, including 40 jours dans le Désert B , which Moebius published in his own publishing house, Editions Stardom.

Since 1975 Giraud has worked repeatedly for the film industry. He designed the space suits for Alien and wrote storyboards for the unrealized Dune project by Alejandro Jodorowsky , Les Maîtres du Temps ( ruler of time ), Tron and Abyss - Abyss of Death . He and Jean-Claude Mézières developed the design for Das fifth Element . In 1984 he worked in a Japanese animation studio for a movie with motifs from Winsor McCay's Little Nemo . The cartoon series Arzak Rhapsody was created in 2002 .

Jean Giraud's style developed during his work on Lieutenant Blueberry from drawings that were very similar to Jijé to an independent way of drawing. In the first episodes the page structure is schematic with evenly arranged panels. The drawings made with the ink brush offer few details. The main purpose of the color scheme is to be able to distinguish between the individual objects and people, it is not used as an artistic means. Gradually, Giraud focused on detailed backgrounds and depictions of nature. The landscape is given an immovable value as it forces the protagonists in certain directions, is an obstacle and a refuge for them at the same time and thus determines their actions. It gives large panoramas appropriate space on one page, separates individual panels with narrow close-ups and thus breaks through the classic structure of a comic book page. The realistically drawn portraits reflect feelings and thoughts with carefully designed folds and contours. The coloring is based on the structures of the objects and is used with shading and supported by hatching in order to underline the plasticity and structure of things. Striking colors are replaced by soft nuances, some pages are kept exclusively in shades of brown, which means that the actors, which are sometimes only 1 to 2 cm tall, are integrated into the landscape and merge with it.

The separation between Giraud and Moebius is also evident in the drawing technique. While Giraud made the drawings for Blueberry with the brush, as Moebius he mainly draws with the pen, with which he could work more spontaneously. In addition to fine hatching, Moebius also used more or less condensed points for shading. With a precisely set line, the representations of objects but also landscapes take on the character of construction drawings, which is reinforced by the extensive renunciation of cast shadows. The figures, animals and plants of the worlds described by Moebius are fantastic and strange, but show strong similarities in detail with anatomical features known from the real world. While with Lieutenant Blueberry the speech balloons only had the purpose of dialog display and their position and design was based on the respective panel and thus appear “like foreign bodies on the screen”, Moebius draws them like the panels, font and position fit into that Image and merge with the drawing to form a single piece of information.

The episodic stories of Moebius came about without a complete scenario. Rather, he developed his comics “from panel to panel” without knowing the outcome of the event. Moebius called this procedure “dessin automatique”. As one of the first French draftsmen, Moebius renounced the separation of the original drawing and coloring and, beginning with the work on Arzach , used the possibilities of direct coloring .

As early as 1976 Numa Sadoul wrote a monograph by Jean Giraud with Mister Moebius et Docteur Gir . In 1993 Visions of Arzach ("The Dreams of Arzach") was published, a homage to 50 predominantly American comic artists. In 2003, Andreas Platthaus devoted himself to the biography of the draftsman and the myth of his two faces in Moebius Zeichenwelt with essays and many previously unpublished drawings. In 2004, an adaptation of Lieutenant Blueberry starring Vincent Cassel and Juliette Lewis was released in cinemas. The documentary film Moebius Redux. A life in pictures. was created in 2006 as a collaboration between ZDF , ARTE and Canadian television stations. He dedicates himself to Moebius in many pictures, interviews with himself and Jodorowsky and assessments of other comic artists like Philippe Druillet , Jim Lee , Stan Lee and others.

"I have been impressed and affected by Moebius's keen and unusual sense of design and the distinctive way in which he depicts the fantastic."

"I was impressed and influenced by Möbius' keen and unusual sense of design and the unmistakable way in which he depicts the fantastic."

In 2000 the works to illustrate a new edition of the Divine Comedy by Dante Alighieri , designed by Moebius, Lorenzo Mattotti and Milton Glaser for the Nuages ​​publishing house, were exhibited in the Italian National Library in Florence . In 2004 the Badischer Kunstverein Karlsruhe showed works from different creative phases of Moebius' in the exhibition Welten . In 2004, the Musée de la Monnaie in Paris conceived an exhibition in which Moebius and Hayao Miyazaki presented previously unpublished drawings from their private collections. In 2010/11 the Fondation Cartier pour l'art contemporain presented the exhibition MOEBIUS-TRANSE-FORME in Paris. In 2019/2020 the Max Ernst Museum Brühl of the LVR is dedicating a retrospective to the draftsman with around 450 works.