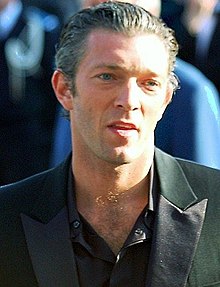 Vincent Cassel was born the son of the French actor Jean-Pierre Cassel and the journalist Sabine Litique in the Paris district of Montmartre ; the parents divorced in 1980. In his youth, Cassel stood out for his rebellious behavior and was expelled from one boarding school to another until he became a member of a circus school at the age of 17 . On the advice of his parents, he avoided switching to acting like his father in the following years. Eventually he traveled to the United States and studied at the Actors Institute in New York . At the age of twenty he returned to France and worked with the renowned theater director Jean-Louis Barrault . Under him he was u. a. to be seen in the theater productions Les oiseaux and Le théâtre de foire .

Beginning of his acting career

After an engagement in the French television series La belle anglaise in 1988, Cassel started his film career a year later with Didier Kaminka's father is difficult . Other supporting roles followed in the comedies Mixed Double and Die Schokoladenprinzessin , where he met the director and actor Mathieu Kassovitz . Together with him he shot Lola Loves Black and White in 1993 , a triangular comedy set in Paris. Kassovitz starred in his film, while Cassel acted as his older brother, a die-hard Jewish boxer .

The intensive collaboration between Kassovitz and Cassel led to success in 1995 with the film Hass . In his drama, which is consistently black and white, Kassovitz portrays 24 hours in the dreary life of three young friends of a Parisian banlieue . Cassel, who took on his first leading role under Kassovitz as the rebellious Vince, was nominated as best young actor and best leading actor for a César alongside such established French mimes as Michel Serrault and Jean-Louis Trintignant .

After the great success of Hass , which made Cassel known beyond the borders of France, he was part of the international production Jefferson in Paris by James Ivory in 1995 , in which he played alongside Nick Nolte , Greta Scacchi and Gwyneth Paltrow . This was followed by the French tragicomedy Affair for Beginners with Karin Viard and Richard Berry and Olivier Schatzky's L'élève , in which he played the leading role. Another leading role followed the following year in Gilles Mimouni's psychological thriller Lies of Love . Cassel played the aspiring businessman Max, who before a business trip to Tokyo reunites with his old sweetheart Lisa, who inexplicably disappeared from his life years ago. Monica Bellucci , who played Lisa, he got to know and love outside of the film set. They appeared together in a number of films in the following years, e.g. For example in Gaspar Noé's controversial drama Irreversibel , which Cassel co-produced, or in Frédéric Schoendoerffer's agent film Agents Secrets - In the crosshairs of death .

Highlights of his career

1998 saw Cassel in Shekhar Kapurs several times for the Oscar nominated film Elizabeth . At the side of Cate Blanchett , Joseph Fiennes and Geoffrey Rush , he played the eccentric Duke of Anjou, who is about to marry the heroine. In the same year Cassel delivered his first directorial work with Shabat Night Fever , for which he also wrote the script together with Anthony Souter . The film adaptation of another historical material followed with Luc Besson's Johanna von Orleans , in which he played Johanna's comrade in arms Gilles de Rais .

In 2000, Cassel worked again with Kassovitz. In his crime film The Crimson Rivers , which is based on the novel of the same name by the French writer Jean-Christophe Grangé , Cassel and Jean Reno formed an investigative duo that uncovered a series of murders at a top university in the French Alps . He was nominated for the European Film Award for his portrayal of the unconventional detective commissioner Max Kerkerian - in a fight scene he broke his nose while filming. In 2004 he decided not to participate in the sequel The Angels of the Apocalypse , he was replaced by Benoît Magimel .

In 2001, Cassel, who u. a. in France the British actor Hugh Grant dubbed, in the animated film Shrek his voice is portrayed feminine Robin Hood . A short time later he was seen as the villain in Christophe Gans ' historical horror film Pact of the Wolves , which thematizes the legend of the beast of Gévaudan . In the same year followed a joint appearance as a Russian petty criminal with Kassovitz in the thriller Birthday Girl - Bride to Order at the side of Nicole Kidman and Ben Chaplin as well as the leading role in Jacques Audiard's thriller lip service . For his role as Paul, a recently released thief who enters into a liaison with a hearing-impaired secretary (played by Emmanuelle Devos ), he was again awarded a nomination for Best Actor for the César and the European Film Awards in 2002. In the same year he spoke the saber-toothed tiger Diego for the French dubbing of the animated film Ice Age .

After appearances in Steven Soderbergh's crime film Ocean’s 12 , the lead role in Jan Kounen's European western Blueberry and the Curse of the Demons and the French dubbing of the robot Rodney in the animated film Robots , Cassel was in Mikael Håfström's 2005 thriller Derailed alongside Clive Owen and Jennifer Aniston to see. In 2006 Kim Chapiron's horror film Sheitan followed , in which he plays a shepherd who is disturbed by a group of young people while preparing for a satanic ritual.

Cassel celebrated another success in America in 2007 in the Oscar- nominated mafia thriller Deadly Promises - Eastern Promises . At the side of Viggo Mortensen , Naomi Watts and Armin Mueller-Stahl , he embodied the eccentric son of a Russian mafioso who runs a restaurant in London. He celebrated his greatest success so far with the part of Jacques Mesrine in Jean-François Richets feature films Public Enemy No. 1 - Murder Instinct and Public Enemy No. 1 - death instinct . The role of the French violent criminal brought him the César for Best Actor in 2009 . In 2010 he was also in the Oscar-winning ballet drama Black Swan alongside Natalie Portman and Winona Ryder one of the party.

From March 2009 Cassel promoted the perfume Nuit de l'homme by Yves Saint Laurent , and in 2011 for the Lancia Ypsilon .

Vincent Cassel had been married to Monica Bellucci since 1999 (she was his film partner in Lies of Love , Doberman Pinscher and, after the wedding in Pact of Wolves , Agents Secrets - In the crosshairs of death and irreversible ) . They have two daughters who were born on September 12, 2004 and May 21, 2010 in Rome . In August 2013, Bellucci announced the split, which Cassel confirmed on August 26, 2013.

In August 2018, Cassel married model Tina Kunakey, who is over 30 years her junior. The first child together, a girl, was born in April 2019.

Cassel has mastered the Brazilian martial art Capoeira , which he also uses in several films. He lives in Rio de Janeiro .