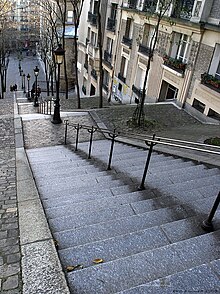 The famous stairs of Montmartre.

View from Montmartre to Paris

Montmartre ([ mɔ̃.maʁtʁ ], German  martyr hill) is the name of a hill in the north of Paris and an earlier village located there. The 18th district of Paris , created in 1860 through the incorporation of the villages of Montmartre, La Chapelle and Clignancourt, also bears this name.

The Montmartre hill ( French butte Montmartre ) is the highest natural elevation in the city. Its summit, which is 130  m high, is crowned by the Sacré-Cœur Basilica, which is visible from afar . The famous stairs and a funicular , the Funiculaire de Montmartre, lead up the hill .

The village of Montmartre was an artistic and literary stronghold and a popular destination in the 19th century. Today, the artists who exhibit their work and make portraits, caricatures and paper cuttings on the Place du Tertre mainly attract tourists. Another attraction is the vineyard of the Commanderie du Clos Montmartre , whose rather acidic wines are grown by a sworn community of artists.

In the Chronicle of Fredegar the hill was called "Mons Mercore" (Mercury hill), but the name "Mons Martis" (Marsh hill) is also likely. While earlier lives of St. Dionysius did not separate the place of execution and burial, Abbot Hilduin of Saint-Denis locates the place of execution on the hill in the new version of Passio Sanctissmi Dionysii and changed the name to "Mons martyrum" due to the similar sound.

The hill is in the northern part of the city. The paths leading north (North Sea) and northwest (English Channel) across the Seine island - the Île de la Cité - bypassed the high obstacle in the east, so that the hill largely retained its rural character until well into the 19th century.

When the railway became more important from the middle of the 19th century , Montmartre was not directly developed - in contrast to Montparnasse with its now indispensable Gare Montparnasse . Two train stations, the Gare du Nord and the Gare de l'Est , are about one to two kilometers southeast of the Sacré-Cœur.

In the Gallo-Roman era, two temples dedicated to the gods Mars and Mercury rose on the hill . Thanks to its large deposits of gypsum , Montmartre developed into one of the richest areas around Paris. Therefore, many villas and temples were found there at that time. The quarries in which the gypsum was extracted later also served as refuge for the first Christians . Around the year 272 the bishop Dionysius (patron saint of Paris), the priest Rustikus and the archdeacon Eleutherius were beheaded here. That is why Montmartre was an important pilgrimage center dedicated to Saint Denis in the Middle Ages . According to legend, after he was beheaded, Saint Denis took his head, washed it in a spring and walked about 6 kilometers to the present day Saint-Denis .

In the 12th century the order of the Benedictines established a monastery in Montmartre. The former abbey and today's parish church of Saint-Pierre de Montmartre is one of the oldest sacred buildings in Paris and stands next to the Place du Tertre . It was ordered by Ludwig VI. built on the site of a former Mars temple (5th century) and on Easter Monday 1147 by Pope Eugene III . consecrated.

On August 15, 1534 , St. Ignatius of Loyola founded the Jesuit order in Montmartre . During this period, windmills began to be built to grind the gypsum and large vineyards were planted.

Residential building on the butte Montmartre

Due to the work of Baron Haussmann , which made life in Paris extremely expensive, the population in Montmartre grew rapidly. Many workers, but also respected families, now settled here.

Gypsum mining developed into the most important industry in Montmartre. The Place Blanche (white square) was named after the rock that is so common. Many new gypsum mills were built.

In the Battle of Paris , which Gebhard Leberecht von Blücher advanced during the Sixth Coalition War , the Russian general Alexandre Andrault de Langeron took care of the storming of the heights of Montmartre. On the afternoon of March 30, 1814, the French commanders gave up the fight and surrendered. The following day the allies of the Wars of Liberation against Napoléon Bonaparte entered the capital.

On June 6, 1859, Montmartre was incorporated into Paris, but still retained its own identity. A year after incorporation , Montmartre had about 57,000 inhabitants. In March 1871, after the end of the Franco-Prussian War , Montmartre became the starting point and birthplace of the Paris Commune . After it was violently ended, the French National Assembly decided in 1873 to build the Sacré-Cœur church, which was to commemorate the French victims of the Franco-Prussian War and the “repentance of the crimes of the Communards”. Construction began three years later on the Sacré-Cœur church, which today towers over Montmartre as a landmark that can be seen from afar. The church was consecrated in 1919. 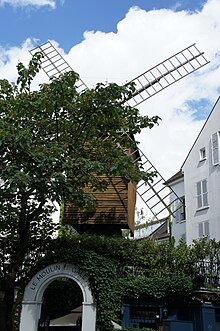 At the beginning of the 20th century and increasingly after the First World War , many artists left Montmartre for Montparnasse , the birthplace of modern painting. The boulevards at the foot of the hill, between Place Blanche and Place Pigalle , gradually developed into a red light district .

In 1929, the company "Rapid Film", founded by Bernard Natan and located in the former department store "Grand Bazar" ( Rue Francoeur No. 6) since 1926, merged at Montmartre . It was initially a film laboratory and then specialized in the production of advertising films had its own film studio since 1927, with the Pathé company. The resulting Pathé studios produced hundreds of French films before they ceased operations in the mid-1990s. Since 1994 the rooms have been home to the famous La fémis film school . Today Montmartre is a popular destination for Paris visitors. The Sacré-Cœur Basilica in particular and the Place du Tertre , which is populated by artists, are often overrun by crowds. On a particularly low-traffic summer morning, the short film C'était un rendez-vous (1976) by Claude Lelouch was made on the streets of Montmartre and ends exactly on the large flight of stairs in front of the main entrance to the Sacré-Cœur. The area around the Moulin de la Galette and the Cimetière de Montmartre , on the other hand, is rather quiet and still exudes a bit of the old turn of the century charm of the quarter.

1870–1871 Georges Clemenceau was mayor of the 18th arrondissement , which also included Montmartre.

Very few of the artists who established Montmartre's fame were born there. That is why artists are listed here who lived and worked on Montmartre and the immediate vicinity, in the chronological order of their year of birth.

Aristide Bruant on a poster by Henri de Toulouse-Lautrec, 1892

In addition to artists, the following personalities have lived on Montmartre or in the immediate vicinity: