Émile Bernard (born April 28, 1868 in Lille , † April 16, 1941 in Paris ) was a French painter , printmaker , art theorist and novelist. He is one of the most dazzling figures at the beginning of modern painting. As a co-founder of cloisonism and synthetism , he was involved in the upheaval that art experienced in the 1880s. His writings and the correspondence with Vincent van Gogh , Paul Gauguin and Paul Cézanne are among the main art historical sources of the late 19th century. With Gauguin he developed symbolist painting in 1888 . He stood up for his friend van Gogh even after his death (1890).

Émile Bernard was born to an entrepreneur in the textile industry and moved to Paris with his parents when he was ten. There he entered the studio of the academic painter Fernand Cormon in 1884 at the age of 16 , where he met Louis Anquetin and Henri de Toulouse-Lautrec . In 1886 he was expelled from Cormon's studio because he and Cormon had different artistic views. He then went on a hike through Normandy and Brittany , where he met Émile Schuffenecker in Concarneau . With a letter of recommendation from him to Paul Gauguin , who was twenty years his senior , he traveled on to Pont-Aven , where he initially had little contact with the artist.

Gauguin 1888, self-portrait in the role of Jean Valjean with a portrait of Bernard, “for Vincent”.

After meeting Vincent van Gogh in Paris in the winter of 1886/87 , Bernard traveled - together with Louis Anquetin - to Brittany again in 1887. In 1888 a fruitful collaboration with Gauguin developed in Pont-Aven, along with intensive correspondence with Van Gogh. The two artists continued this in Paris in 1889.

Bernard's bold theories and doctrinal statements quickly caused a stir among colleagues. Together with Louis Anquetin, he developed new image strategies that caught both van Gogh and Gauguin and coined the term cloisonism for Eduard Dujardin, editor and art critic of the Revue indépendante . In the short weeks of their fruitful and conflict-ridden collaboration, Bernard and Gauguin formulated and disseminated the principles of synthetism and wrote art history with them. Both are co-founders of what later became known as the Pont-Aven School . Bernard Gauguin also instructed Gauguin in zinc printing and worked with him to forge plans for the Atelier des Tropiques ("Tropical Atelier") that Gauguin had planned , the counterpart to van Gogh's failed joint project Atelier du Midi ("Atelier des Südens").

In 1889 he took part in the counter-art exhibition organized by Gauguin on the occasion of the Paris World Exhibition in Café Volpini . Soon afterwards he went through a personal crisis which, after van Gogh's tragic death (1890), of whose funeral he reported in a letter to Albert Aurier , led to his final break with Gauguin in 1891. The reason was not least Bernard's disappointment with a toast made at a banquet to "Paul Gauguin as the founder of symbolism". He accused Gauguin of having usurped all the achievements of the artist group from Pont-Aven, and felt betrayed and betrayed. 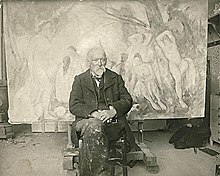 Meanwhile, his personal situation was also strained. As early as 1888, “the lot” fell on him because he had meanwhile become conscript and had to reckon with confiscation. Benevolent medical reports postponed this, while van Gogh encouraged him in a letter. In 1893 he fled anyway, went on a trip to Italy and the Middle East and finally settled in Egypt (then a British protectorate) with the support of patrons such as Antoine de La Rochefoucauld and Theo van Gogh's brother-in-law Andries Bonger , where he was from Lived and married from 1893 to 1904.

Returning to France in February 1904, Bernard met the painter Paul Cézanne in Aix-en-Provence , stayed for a month and published an article about him in the magazine L'Occident in July . An exchange of letters ensued until Cézanne's death; Bernard published his memoirs Souvenirs sur Paul Cézanne for the first time in 1907 in the “Mercure de France”, and in 1912 they appeared in book form.

Émile Bernard died in 1941 in his Paris studio on Île Saint-Louis , 15 Quai Bourbon. 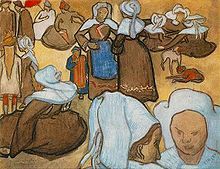 Van Gogh's watercolor copy of the oil painting Le Pardon de Pont-Aven, which Gauguin had exchanged with Bernard and brought to Arles (December 1888).
Van Gogh was enthusiastic about the innovative style and suggested the original to his brother to apply.

Self-Portrait with Portrait of Gauguin (1888)

The artist, who was excluded from Cormon's studio in 1886 due to his individualistic view of art, experimented, like van Gogh, with new painting techniques and was initially interested in pointillism , but, like the latter, soon became enthusiastic about the then fashionable Japanese color woodcuts . These stimulated him to a strong simplification and delimitation of the colored areas. For this style he developed in 1887 in collaboration with Louis Anquetin, who is also from Japonismus was affected, the cloisonnism: not Ent limitation of the object in the loose characteristic style of Impressionism , but from limitation and more precise characterization was her concern.

A further development of cloisonism through the collaboration of Gauguin and Bernard (1888/89) as well as its union with symbolism founded the new art direction of synthetism, to which Bernard remained loyal with interruptions until he turned his back on France. Les Bretonnes aux Ombrelles (1892) , for example, is representative of this creative period .

From 1889, among other things, a psychological and religious crisis reduced his creative power. During this time he alternately sought inspiration in the works of Cézanne and those of the Italian masters, whose influence can be felt in the Descent from the Cross (1890). Apart from that, Bernard also dealt with the works and techniques of medieval xylography .

Finally, during his stay in Egypt, he turned to a mystical or orientalizing traditionalism, which he defended with articles in the magazines Mercure de France and La Rénovation esthétique .