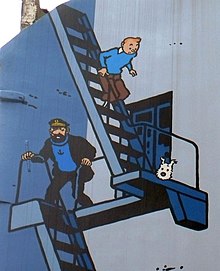 Mural painting on the comic strip route in Brussels of Tintin , arguably the best-known Belgian comic, which has become a symbol of Franco-Belgian comics

The term Franco-Belgian comic is a collective term for comics that were first published in French -speaking Europe, i.e. primarily France and Belgium ( Wallonia and Brussels ), but to a lesser extent also in Romandy (French-speaking Switzerland). These countries have a long comic tradition and the drawn picture stories are mostly recognized there as an independent art form. Successful comic publications achieve large circulations and are sold in France and Belgium to a significant extent through the "normal" book trade.

Especially in the decades after the Second World War , the comic production of the French-speaking area was qualitatively dominant in Europe. The comic magazines Pilote , Spirou and Tintin , in particular, were an important place for talented comic writers and produced a generation of talented, influential authors who were instrumental in developing the Franco-Belgian comic in its current form. Many other European comics were also heavily influenced by Franco-Belgian comics. Up until the 1970s, the term "Franco-Belgian comic" was practically synonymous with European comics.

The best-known and most influential Belgian authors include Hergé , Franquin , Tilieux , Peyo , Roba and Morris , well-known French representatives include Goscinny , Uderzo , Greg , Moebius , Tabary and Tardi . Well-known Swiss representatives are Zep , Job and Derib ; In addition, Flemish authors such as e.g. B. Willy Vandersteen prevail, which are also attributed to the Franco-Belgian comic. Many Dutch comics such as the works of Henk Kuijpers , Theo van den Boogaard or Dick Briel were also heavily influenced by Franco-Belgian comics; the extent to which they can be attributed to Franco-Belgian comics is disputed.

At the beginning of the 20th century, comics did not appear in album form but were published as self-contained gag strips in various daily newspapers as well as in weekly and monthly magazines. Another root of the French-language comics was the large number of children's and youth magazines of the Catholic Church, which also published illustrated stories. The first "proper" French comic was created in 1925 by Alain Saint-Organ with Zig and Puce , a childish " Laurel and Hardy team", which appeared in the newspaper Le Dimanche Illustré . Unlike all previous European series, this series did not consist of closed gags, but of adventures that continued from week to week. From January 10, 1929, the earliest "real" Belgian comic appeared in the magazine Le Petit Vingtième with the adventure Tintin au pays des Soviets . The adventures of a young reporter in breeches in the Soviet Union were penned by Georges Prosper Remi, who adopted the pseudonym Hergé .

In 1934, Hungarian Paul Winkler founded the Journal de Mickey after signing a licensing deal with the American King Features Syndicate . The 8-page weekly became in fact the first French comic magazine. The project was an instant success, and other publishers soon began publishing magazines with American series. As a result, a large number of similar magazines emerged, which initially contained almost exclusively translated material imported from America. The most important such French magazines were Robinson , Hurra and Coeurs Vaillants , Belgian examples are Wrill and Bravo . Spirou magazine was founded in Belgium in 1938 . In addition to American import series, own material was also produced from the start, in particular the series created by Rob-Vel about the hotel boy Spirou, the eponymous main character of the magazine.

After Germany occupied Belgium and France during World War II, it became nearly impossible to continue importing American comics. This emergency situation gave many young local artists the opportunity to try their hand at drawing comics. Initially, authors such as Jijé for Spirou and Edgar P. Jacobs for Bravo completed the already started episodes of American series such as Superman and Flash Gordon . By copying American models, they learned the basics of making successful comic stories. Copied versions of American comics soon disappeared from magazines and were replaced by their own creations. Many of the best-known artists of Franco-Belgian comics began their careers in this period, such as André Franquin , Peyo , Willy Vandersteen , Jacques Martin and Albert Uderzo .

When American comics became available again after the end of the war, the Franco-Belgian in-house productions were already so widely accepted by the readership that many publishers decided to continue the series they had produced themselves. Many journals that had been among the early buyers of the American material had not survived the war, including Le Petit Vingtième and Le Journal de Mickey , which was only re-established in 1952.

In the spirit of optimism in the post-war years, a large number of new magazines were created in the second half of the 1940s, many of which, however, only lasted for a few weeks or months. In the early 1950s, Spirou magazine and the new Tintin magazine , founded in 1946, began to establish themselves as the most influential Belgian comic magazines. Hergé, with his ' clean line ' drawing style, became the mentor of Tintin magazine's comic book artists and was a major influence on the drawing style of artists such as Bob de Moor , Jacques Martin, Roger Leloup and Edgar P. Jacobs. The “ École Marcinelle ” around the Spirou magazine formed a stylistic counterpoint . Jije, who trained numerous young draftsmen such as Peyo , André Franquin , Morris or Eddy Paape and Willy Maltaite and influenced them in their graphic development, had a formative effect here.

In the following years other magazines entered the market. The best known were Vaillant, le journal de Pif and Héroïc-Albums , which presented only completed narratives in each issue instead of the endless serialized stories of the other magazines. The variety of magazines and their regular need for replenishment favored the development of a wide range of different formats and drawing styles that, apart from their Franco-Belgian origins, only have a few formal things in common, such as the largely standardized length of a comic adventure.

The comic character Gaston by André Franquin is also one of the Franco-Belgian comic classics.

In the 1960s, a more adult audience began to take an interest in comics. New magazines, such as the French Pilote , adapted to changing public interest with more sophisticated series such as Asterix , The Red Corsair , Tanguy and Laverdure , Valerian and Veronique and Lieutenant Blueberry . The social changes brought about by the '68 student movements were reflected in magazines such as L'Écho des Savanes , Fluide Glacial , Charlie Hebdo or the science fiction-oriented Métal Hurlant . Founded by the authors Jean-Pierre Dionnet , Philippe Druillet , Bernard Farkas , Jacques Géron and Moebius , works were created here that represent an important evolution of comics. In Der Champion , for example, Baru describes the Algerian world boxing champion Said Boudiaf and his involvement in his country 's struggle for independence , and in L'autoroute de Soleil the consequences of the awakening racism in the country of Le Pen's Front National .

In book form, the publishers Albin Michel and Éditions du Square in particular brought out draftsmen such as Reiser and Wolinski in his Série bête et méchante (“stupid and malicious”) , who impaled current social and political developments in France on the pen. In the 1970s this trend towards adult comics continued. Artists such as Gotlib , Moebius , Druillet and Bilal stand for this new development with new content ranging from imaginative visions of the future to erotic comics and the simultaneous further development of graphic styles. The avant-garde magazine Métal Hurlant (heavy metal) became the home of many representatives of this comic form . The series Les Frustrés (Eng.: The Frustrated) by Claire Bretécher , which appeared in the weekly magazine Le nouvel observateur , also achieved temporary cult status. In 1974 the first comic salon was held in Angoulême .

In the 1980s, the print runs of the traditional French-language comics magazines steadily declined, mainly because fewer and fewer young people were interested in comics. At the same time, the 10th Angoulême Comic Salon in 1983 set a new visitor record with 150,000 guests. In 1985, even the French President François Mitterrand visited the comic festival, which is now well known beyond the national borders, and thus finally made the comic socially acceptable in France.

After decades of expansion, Franco-Belgian comics fell into a temporary crisis, triggered by too many series, too many albums, too much mediocrity. In addition, there was a gradual change of generations: many of the most important authors of the first generation of Franco-Belgian comics such as Goscinny (died 1977), Tillieux (1978), Hergé (1983), Peyo (1992) and Franquin (1997) gradually died and were unable to adequately be replaced. Even for decades-old traditional series, the following reflection on more quality meant the end, as well as for some traditional and important magazines: Métal Hurlant was discontinued in 1987, Tintin 1988, Pilote 1989, Pif Gadget 1993; Various attempts to create a successor format to Tintin lasted until 1993. As a result, only Spirou remains of the most important Franco-Belgian comic magazines .

The further development of Franco-Belgian comics remained largely unaffected by this. Comics in album format are still appearing in large numbers and sometimes with equally high sales figures. The decline of the major comic magazines in the 1990s was also offset, at least in part, by the emergence of new, smaller, independent independent publishers, such as L'Association or Le Dernier Cri , which differentiated themselves from the more sophisticated, artistic and unconventional content of the major mainstream publications and thus gave new impetus to Franco-Belgian comics. But although a large number of new series are still being created, the influence of Franco-Belgian comics outside the French-speaking area has declined significantly since the mid-1990s. The commercial success of the new series is modest compared to the classics of Franco-Belgian comics. Above all, comics from Japan, the manga , are increasingly seen as a threat to sales of local comics. In 2006, Japanese comics accounted for around 60% of total sales in France and around 80% in Germany.

Franco-Belgian comics have been translated into many languages ​​and are successful throughout Europe, especially in Central and Northern Europe, and in some cases worldwide. The high level of awareness of Franco-Belgian comics outside the French and Dutch-speaking countries is based on a rather small number of particularly successful and popular series, of which the following are particularly well-known: