The Times of Israel 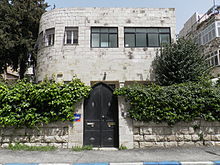 German colony of Jerusalem, seat of The Times of Israel

The Times of Israel is an Israeli internet newspaper that has been published in English , Arabic , French and Chinese since 2012 .

Founder is the Israeli journalist David Horovitz , former editor of the Jerusalem Post (2004–2011) and of The Jerusalem Report (1998–2004); The US entrepreneur Seth Klarman is co-owner and financier . The editorial office is located in the German colony of Jerusalem .

The aim of the internet newspaper is to convey a broad picture of a rapidly changing regional environment and to offer independent reporting at the highest level. A special feature is a press review of the Hebrew and Arabic-language press in Israel and the Middle East .