Logo of the Grimme Online Awards 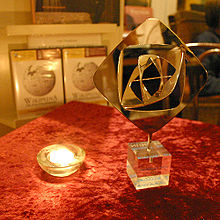 Grimme Online Award 2005, given to Wikipedia 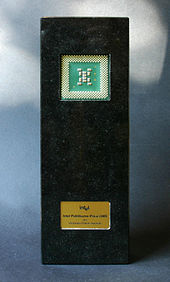 The Grimme Online Award is a non-endowed award for journalistic quality on the Internet , which has been awarded since 2001 by the Grimme Institute , which also awards the prestigious Grimme TV Prize . Outstanding German-language online offers aimed at the general public are honored in several categories . The categories have been adapted several times to changed objectives.

During a nomination phase , broadcasters, agencies, production companies or other media or online providers, as well as any other Internet user, can submit proposals. The main focus here is on new forms and content of public communication. Offers that mainly serve advertising purposes are excluded from participation in the competition.

The proposals are preselected by a nomination committee. This is made up of professionals in the fields of journalism, science and new media. In 2008 nearly 1900 proposals were submitted.

The actual jury selects the winners from the up to 30 nominated websites. This is also made up of interdisciplinary experts. The evaluation criteria include content, design, communication, user-friendliness, intermediality (connection with other media), creativity and service. In addition, compliance with journalistic quality standards and the exercise of social responsibility are important.

The Grimme Online Award has been presented in three categories since 2005, and a fourth category was added in 2008:

A maximum of eight online offers can be awarded in one year in the four categories. In addition, a public prize is awarded every year , which the public can choose from the list of nominees.

The list of the winners of the Grimme Online Awards gives an overview of all previous winners.

There was criticism of the decision-making process for the Grimme Online Award in 2007, when the video podcast Electric Reporter was nominated again, although the author was initially represented on the jury. The Grimme Institute took up this criticism and changed the statute for the Grimme Online Award in such a way that since 2008 an overlap between jury membership and participation in the competition has been excluded from the start. In addition, a series of technical breakdowns made headlines in 2007, so that the award winners were announced on the award website two days before the planned date.