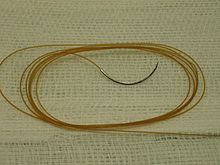 The etymology of the term is doubtful. Possible explanations are a contraction of cattle gut (“ cattle gut ”) or a corruption of kit gut ( kit used to refer to a fiddle or dance master violin , but also means “kitten”).

The medical term "Catgut" was usually not translated into German, where it used to be written "Katgut". It has never been proven that cats' intestines were used for this, as is sometimes claimed.

Use in musical instruments 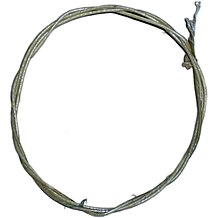 Gut string for a violoncello

Strings are still made from sheep and beef intestines today. But they are simply referred to as gut strings and usually no longer as "cat intestines".

Some traditional string instruments, such as the Persian tar , use intestines as frets . Even with lutes and viols, the frets are often made from gut strings.

Because of its tensile strength, the material was also used in watchmaking to hang watch weights. Modern, age-resistant materials are available for this purpose today, but it is still used in the faithful restoration of antique clocks.

For various types of racket sports ( badminton , squash , tennis ), natural casing is used to cover the racket. Strings made from natural gut are often of higher quality than plastic strings, but they also lose their excellent properties much faster.

Use as medical sutures

Already Galen (2nd century. Chr.) Reported the use of gut strings for suturing of wounds . Catgut was made from the intestines of highland sheep and, more recently, from cattle collagen . The threads decompose within a few days under the action of the body's own enzymes and are thus absorbed , so they dissolve themselves and do not need to be pulled. At the time of Joseph Lister (1827–1912), catgut (catgut in German-speaking countries) and silk were common in medicine and veterinary medicine . In 1860 Lister introduced catgut disinfected with phenol (then called “carbol oil”).

Around 1900 various sterilization methods for catgut were practiced, including with chromic acid or iodine. However, none of them were completely reliable. In 1908, the pharmacist Carl Braun and the surgeon Franz Kuhn developed a method for the industrial production of sterile catgut from mutton intestine, which laid the foundation for the success of the medical supplies company B. Braun Melsungen .

From 1935 onwards, catgut was replaced as suturing material in human medicine by synthetic threads, which, however, were initially non-absorbable and therefore had to be pulled. But catgut has also not been allowed to be used in veterinary medicine in Europe and Japan since 2001 and 2002, out of caution against BSE . Instead, synthetic absorbable materials are used, which are hydrolyzed solely through the action of tissue water (and without variable enzymatic activities) .

Even sheep casings , the Pelle different stringed sausages are sometimes referred to as catgut.