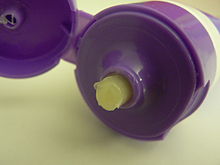 Wool wax (also known as lanolin , wool fat , Latin Adeps lanae ) is the secretion from the sebum glands of sheep that is obtained from washing sheep's wool .

Lanolin is the INCI name for wool wax as an ingredient in cosmetics and is therefore an internationally used term. The wool wax must be distinguished from pharmaceutically used wool wax-containing water-absorbent ointment bases, which according to the pharmacopoeia nomenclature are also called lanolin (Latin: Lanolinum ). That is why the term wool wax is more common in the pharmaceutical sector and the term lanolin is more common in all other areas.

Due to the bifunctional groups of the hydroxy acids (approx. 32% of the fatty acid fraction ) and the dihydroxy alcohols (approx. 7% of the alcohol fraction), lanolin consists of a mixture of predominantly long-chain esters , di-esters and hydroxy-esters. During their hydrolysis , around 70 aliphatic alcohols (C 14 –C 36 ), six sterols ( cholesterol , dihydrocholesterol, lanosterol , dihydrolanosterol, agnosterol, dihydroagnosterol) and around 140 fatty acids (C 8 –C 41 ) have been isolated. Pharmaceutical wool wax may contain up to 0.5% free fatty acids (e.g. European Pharmacopoeia, acid number <1). The free alcohol content (up to 12%) is not limited.

The wool wax, which was already used medically in ancient times under the name Oesypus, was later forgotten and was only reintroduced into the medicinal treasure in 1885 by Oskar Liebreich as purified wool fat. Wool fat is an inaccurate name in that fats are fatty acid esters of glycerine , whereas waxes are esters of other alcohols . The raw wool wax is found in the wool sweat of the sheep and is initially transferred to the washing water when the wool is washed, is separated from it by adding acids and then separated by separators.

Sheep wool: The raw wool wax is obtained by washing it out

Several treatment steps are necessary to purify raw wool wax, as the impurities to be removed are of very different nature. The raw wool wax is first treated with dilute hydrochloric / phosphoric acid in order to convert all water-soluble and fat-soluble soaps into free fatty acids. Acid-soluble impurities are removed at the same time. The aqueous phase is drawn off and the remaining raw wool wax is washed with hot water until it reacts neutrally.

The free fatty acids are first converted into soaps by neutralization with sodium carbonate or preferably sodium hydroxide solution . Since the resulting sodium soaps are poorly soluble in water, either ethanol or 2-propanol is added as an additional solvent in a concentration of 20 to 30%. In order to ensure a stoichiometric conversion of the fatty acids, sodium hydroxide solution is added in excess. Due to the high ion concentration, this also reduces the formation of disruptive emulsions. Too large an excess of sodium hydroxide solution must be avoided, as this leads to alkaline hydrolysis of the esters. After the soaps have formed, the aqueous layer is removed and the wool wax is then washed with hot water or diluted alcohol until it is completely free of the remaining soap. Finally the product is dried. The previously removed soap solution is not discarded, but is normally acidified with sulfuric acid in order to get the free fatty acids from the soaps again.

To avoid tick infestation , sheep are treated with pesticides after shearing, which are readily fat-soluble substances that accumulate in wool wax. In order to remove the pesticides and PAH residues, a short-path distillation follows under high vacuum, which at the same time causes deodorization . In this process, the amount of naturally occurring free fatty alcohols in wool wax, which contribute to the good water / oil emulsion properties of wool wax, is significantly reduced. This can lead to a correspondingly reduced water absorption.

Detergent or laundry detergent residues are largely removed from the raw wool wax by these treatments. A further reduction can be achieved by additional extraction with a polar solvent such as 45 percent ethanol or 2-propanol or by treatment with an adsorbent such as active earth or activated carbon , which must then be followed by filtration.

The color is not an indicator of the effectiveness and purity of wool wax, but a light color is considered more aesthetic. It can be achieved by chemical or physical bleaching. Oxidative bleaching with hydrogen peroxide is traditional, but it has the undesirable side effect of leading to a significant peroxide value , which can be interpreted as rancidity. It therefore requires careful control and subsequent treatment to remove the organic peroxide residues. After bleaching, the wool wax is dried with dry air or by applying a vacuum. At the end, max. 200 ppm BHT ( butylhydroxytoluene ) added as an antioxidant (if required). After the final analysis, the batch is filtered and bottled.

The anhydrous wool wax (lat. Adeps lanae anhydricus ) of the European Pharmacopoeia, a light yellow, ointment-like mass with a weak, characteristic odor, is insoluble in water and melts at 40 ° C.

Wool wax is a mixture of liquid and solid waxy masses. From a chemical point of view, wool wax is a mixture of cholesterol and isocholesterol fatty acid esters and also contains free alcohols and hydrocarbons . The esters consist of long-chain fatty acids and wax acids , bound to fatty alcohols , wax alcohols , cholesterol , lanosterol and other sterols . Pure wool wax must only leave a very small amount of ash residue and only contain traces of free acid. Alkalis, chlorides and glycerine must not be included.

Wool wax has the ability to absorb several times its weight in water, thereby forming a water-in-oil emulsion (W / O emulsion). Responsible for the emulsifying properties of wool wax are the free wool wax alcohols contained in up to 10% , which can occasionally cause allergic reactions with redness and swelling. It is estimated that an average of 0.6% to a maximum of 1.4% of the population in the Federal Republic of Germany are allergic to lanolin.

Wool wax has very good skin care properties, as it can regulate the transepidermal water balance. It accelerates wound healing and is therefore contained in ointments, baby creams and care creams for stressed skin as well as in skin protection ointments. Its caring properties are also used in leather care products. A traditional remedy that uses the skin-caring properties of lanolin is natural healing wool .

In cosmetic preparations, purified wool wax is used as a co-emulsifier, strongly adherent lipid and superfatting agent. As a natural alternative to petroleum jelly , lanolin can be used as a nasal ointment to care for the mucous membranes . It is also used during breastfeeding to care for sore nipples . Wool fat also serves as a base for the production of wound healing ointments (example: Kamillosan ointment , with chamomile extracts ). It is also used in shaving soaps , which then usually advertise lanolin as a quality feature.

Lanolin is also used in technical areas, such as B. as corrosion protection for sheet metal parts and cavities in vehicles or ships.

So-called wool cures are offered for treating wool products , which in addition to lanolin also contain soap or surfactants and other ingredients to facilitate the distribution of the wool fat on the wool. Since these agents not only contain re-greasing but also dirt-dissolving ingredients, it largely depends on the recipe whether the cleaning or water-repellent effect is in the foreground.

Wool rinses and wool impregnations often contain similar ingredients such as wool cures in different proportions, with at rinses the cleaning and waterproofing outweighs the dirt and water repellent effect. The latter should therefore be used for diaper pants, diaper liners, diaper covers and clothing made of wool that are worn as weather protection. In baby care when changing diapers with cloth diapers, wool wax is used to grease wool overpants.