In South Korea, the Romanization of Korean names is not officially regulated; the parents can determine the romanized spelling of their child's name, who may later romanize their name differently. Often, decisions are made spontaneously and without the aid of established systems ( revised Romanization , McCune-Reischauer ). To make matters worse, many, but not all, Koreans use their names in Western order when they come into contact with Westerners. If it's not one of the popular names like Kim, Park, or Lee, it helps to remember that the proper name is mostly two-syllable. The syllables are separated by spaces, hyphens or not at all.

Marriage between people from a family of the same tribe was only made possible by a change in the law in 2005. In order to be able to distinguish whether two people with the same family name belong to the same family, they are asked for their bon (Hangeul: 본 ; Hanja: 本 ; literally: "trunk of the tree"), that is, the place of origin of their family. Ancestral locations of the families are traditionally recorded in Jokbo (family tree). Official registers have only been used under Western influence since the beginning of the 20th century.

There are only around 300 family names in total. For clear identification, it can therefore be helpful to state the family name and proper name when addressing someone.

For salutation ( hoching , ängt ) titles or other words are often added to the name or replace it entirely; Using the name alone and leaving out the additions is uncommon in most situations. Addressing someone by their proper name is only common among friends of the same age and with younger people or children.

The Sino Korean proper names have a meaning, but on the basis of the homophony of the Korean usually only by the Chinese characters ( Hanja opens). Often all male relatives of a generation have a name that is the same in one of the two syllables; this only applies to those whose ancestors were to a certain extent Yangban and thus managed their Jokbo (family tree). Otherwise the choice of your own name is completely free. In contrast to the western world, a woman keeps her family name when she marries, the children then bear the father's family name.

In contrast to western culture, there are no typical proper names or name models in Korea. Instead, a new individual proper name is created for each newborn, which requires a certain knowledge of the Chinese script. This task is traditionally taken over by the oldest male family member in the paternal line. Alternatively, an agency that specializes in creating proper names is sought out ("jakmyeongso"; 작명소 ).

Unlike first names in German-speaking countries , many Koreans' first names are not necessarily excluded for boys or girls. Men and women can have the same proper names. Usually, however, the newborns are given gender-specific names. Every Korean usually easily recognizes the gender of the proper name by its ending, but also by its sound value.

If you read something about a person and there is no picture, you are still often dependent on the proper name as the only indication of the gender of the person, since the endings of verbs and adjectives as well as information on the position within an organization (e.g. " Head of Department ”) as well as all titles and job descriptions are gender neutral and the use of pronouns such as geunyeo (그녀;“ she ” singular ) is in most cases a characteristic of foreign language or disrespect.

Baekseong (literally “a hundred names”, representing the hundred most common families) is the Chinese name for the common people.

The ten most common surnames in South Korea

Around 45% of the South Korean population has one of the three most common surnames 김 (Kim), 이 (Lee) and 박 (Park). In North Korea, the family names are likely to be distributed similarly. 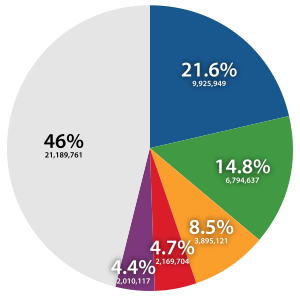 Distribution of surnames in South Korea:

The rest of the population is divided into about 240 other family names.

In 2000, fewer than every thousandth citizen had one of these family names. However, there may be other carriers of polysyllabic family names in the sets “Unknown” (7,900 people) and “Other” (1,054 people). Households of foreigners are not counted.