Duchy of Modena and Reggio 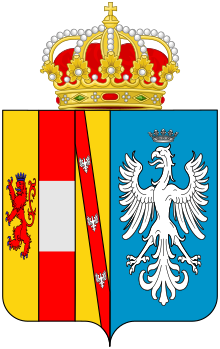 Coat of arms of the Duchy of Modena

Northern Italy in 1796 before the French occupation

The Duchy of Modena and Reggio (Italian: Ducato di Modena e Reggio , usually referred to as the Duchy of Modena ) was a territory in Northern Italy with the main residence in Modena since the 15th century . It was owned by the Este family ; In 1803 it was inherited by the Habsburgs . With an interruption during the coalition wars from 1796 to 1814, the duchy existed until 1860 when it fell to the Kingdom of Sardinia in the course of the Risorgimento .

From the beginning to the 16th century

The Este family had ruled Modena since the 13th century. In 1336 Reggio nell'Emilia was added. This began the development of the princely state.

Emperor Friedrich III. appointed Borso d'Este Duke of Modena and Reggio in 1452. The Pope enfeoffed the family with the city of Ferrara in 1471 . The state was a buffer state between the Papal States , the Duchy of Milan and the Republic of Venice . Since this function was valued by the neighbors, the duchy was seldom endangered. Ferrara was expanded under the dukes of Borso and Ercole I. d'Este . This was a cultural and economic heyday for the duchy, which was briefly interrupted by turmoil around 1482.

After the main line of the family died out in 1597, Cesare d'Este , an illegitimate descendant of the family, was able to claim ownership of Modena and Reggio. Ferrara fell back to the Pope. Cesare became the progenitor of the following dukes.

The son of Cesare d'Este Alfonso III. d'Este sided with Spain in the Mantuan War of Succession in the 17th century. For this, Emperor Ferdinand gave him Correggio in 1633 . In the course of the War of the Spanish Succession , Rinaldo d'Este was expelled in 1702 and the country was occupied by Spain and France. It was not until 1707 that the duke regained power. The Duchy of Mirandola was added in 1711 and the Duchy of Novellara in 1737 .

In the 18th century, the duchy formed a buffer state between the French-dominated Duchy of Parma-Piacenza and the Grand Duchy of Tuscany, which was under Austrian influence .

In the time of Duke Francesco III. d'Este there were reform measures based on the model of Maria Theresa and Joseph II . The state took action against possession of the dead hand , monasteries were dissolved and a cadastre was drawn up, which became the basis of taxation. Attempts were also made against the tax farmers (fermieri). The success of the reform policy remained limited. In contrast to the church, the nobility were hardly affected.

In 1796 the duchy was occupied by the French revolutionary troops. As compensation, Duke Hercules III received. Rinaldo in the peace of Luneville in 1801 the Breisgau . He left these to his son-in-law Archduke Ferdinand of Austria . In the Peace of Pressburg , he lost the Breisgau and died in 1806.

In 1814 it fell to Ferdinand's son Franz IV. From then on, he called himself Este and was the actual founder of the House of Austria-Este. Through his mother, the duchy of Massa and Carrara and an imperial fief in the Lunigiana came into the possession of the house.

Francis IV pursued a policy of reaction . In 1831 the French July Revolution spread to the Duchy. The duke fled to Vienna and was only able to return to Modena with the help of Austrian troops . The government cracked down on the rebels and the liberal opposition was suppressed in the years that followed. The successor Franz V. Ferdinand Geminian also stuck to this domestic political course. In 1847 Fivizzano and in 1848 Guastalla fell to the duchy.

In the 19th century, the country was divided into the provinces of Modena, Reggio, Guastalla, Frignano, Garfagna, Massa-Carrara and Lunigiana . It covered 6132 km² with about 586,000 inhabitants.

In the course of the European revolutions of 1848/1849 riots broke out and these forced the duke to flee. A provisional government took power, declared the duke deposed and joined the Kingdom of Sardinia . The Duke returned to Modena in August 1848 under the protection of Austrian troops. He had already promised internal reforms beforehand. However, these remained half-hearted, so that the unrest continued. The duke maintained his rule with the help of Austrian troops.

When the Italian national movement ( Risorgimento ) threatened the old order in the Sardinian War in 1859 , the duke and his troops joined the Austrians. A provisional government was then formed in Modena. A national assembly, which was also called, declared the removal of the House of Este and the connection to Sardinia. The duke fled to Austria, where he died in 1875. The duchy joined the Kingdom of Sardinia in 1860.