The Duchy of Guastalla (it. Ducato di Guastalla ) was a small territory in northern Italy. It emerged from the city of Guastalla . Surrounding areas were added in 1428 and the counties were raised. The area was most important under the Gonzaga rule . In 1621 it was elevated to a duchy. It was about 1.5 square miles at the time . In the Peace of Aachen in 1748 it fell to the Bourbon Philip, together with the Duchies of Parma and Piacenza , and no longer played an independent role. It officially existed under different owners until the formation of the Kingdom of Italy (1861).

Development in the Middle Ages

The place Guastalla on the Po was first mentioned in writing in the 8th century. Ludwig II gave the curtia regia 864 to his wife Angilberga . In the 11th century the place belonged to the Canossa family . In the 12th century, the city obtained privileges and guarantees from the convent of San Sisto in Piacenza . As a result, several cities such as Cremona and Piacenza fought over ownership of the city. Officially, it remained a part of imperial Italy . In 1347 Charles IV enfeoffed the Correggio with the property. However, he was too weak to enforce this. Guastalla therefore fell into the sphere of influence of the Visconti . Together with the surrounding areas, Guastalla became the signory of the Torrelli in 1406 from the Visconti as a fief . The rule was elevated to a county in 1428, at the same time the territory was separated from the Cremonas. 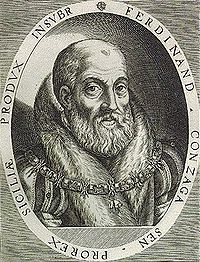 Ferrante I Gonzaga , as general Charles V , conquered the county and restored full imperial immediacy in 1541. It has been owned by the Gonzaga ever since . The new ruler began in 1549 to convert the residential city into a planned city with a pentagonal floor plan.

In 1567 Cesare I. Gonzaga established a permanent court there. As a toddler, Ferrante II. Gonzaga took over the inheritance of his father in 1575 and ruled alone from the age of seventeen until 1630. He was favored by the Spanish and Austrian Habsburgs and advantageously married a niece of Andrea Doria . He tried to expand Guastalla. He also played a certain role among the little northern Italian princes. Emperor Ferdinand II awarded him the title of duke in 1621.

Together with his son Cesare II Gonzaga, he became General Commissioner for Imperial Italy. This enabled the position among the princes to be expanded. The prospect of winning the competition with the Gonzaga-Nevers line for Guastalla after the extinction of the Mantua line also increased . This failed. In the early 1630s the Luzzara and Reggiolo fiefs , originally owned by the Mantua lineage, were added. Ferrante II and Cesare II died in quick succession in 1630 and 1632. The country survived the crisis, among other things because of the good relations with the courts in Vienna and Madrid.

Ferrante III. Gonzaga had turned away from it and did not take over court posts. He tried to lead the country very independently. He had envoys in important capitals, for example. By selling his inherited property in southern Italy, he was able to reorganize the finances and expand Guastalla further. However, he played a political role for the Habsburgs when he led the Duke of Modena to the Spanish camp in 1659. After the death of Ferrante III. there were no direct heirs. After a transition phase, Vincenzo Gonzaga took over the title of duke in 1692 . In the following decades, interrupted by the War of the Spanish and Polish Succession , the duchy was consolidated.

After the death of Ferdinando Carlo von Gonzaga-Nevers , Austria took possession of the Duchy of Mantua. However, the Guastalla line had a strong claim to inheritance. There were addresses of allegiance from representatives of Mantua for the Duke of Guastalla. He was also recognized as Duke of Mantua by various European states. In the dispute with Vienna Guastalla could not prevail, but won the Principality of Bozzolo and the Duchy of Sabbioneta . Further negotiations on compensation were unsuccessful. 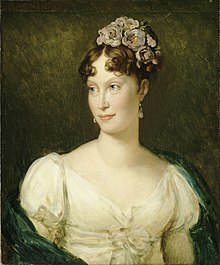 When Giuseppe Gonzaga died in 1746 without an heir, Francis I took the land in as a settled fiefdom. In the Treaty of Aachen it fell to the Bourbon Philip, together with the Duchies of Parma and Piacenza . In the following decades, the duchy did not play an independent role.

In 1797 Guastalla became part of the Cisalpine Republic . Napoleon gave the land to his sister Pauline in 1806 . Shortly afterwards it came to the Kingdom of Italy . After the end of Napoleonic rule, Guastalla was handed over to Marie Louise , Napoleon's wife, with Parma and Piacenza . After her death in 1847 it passed temporarily to Charles von Bourbon before it fell to the Duchy of Modena in 1848 . With this Guastella came to the Kingdom of Italy in 1860.

Gotthold Ephraim Lessing relocates the plot of his tragedy Emilia Galotti to the duo-state Guastalla, which however has nothing to do with the real Guastalla. One of the main characters is a fictional Prince of Guastalla named Hettore Gonzaga.