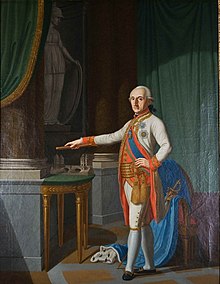 Ercole III. Rinaldo d'Este (born November 22, 1727 in Modena , † October 14, 1803 in Treviso ) was the third and oldest adult son of Duke Francesco III. d'Este from Modena and Reggio from the house of Este .

Ercole inherited the titles and possessions of his father on his death on February 22, 1780. In the wake of the French Revolution , Ercole III. Deposed on October 6, 1796. The two duchies were declared the Cispadan Republic , which was incorporated into the Cisalpine Republic the following year . The ducal family was compensated in 1801 in the Treaty of Lunéville with the Duchy of Modena-Breisgau . Ercole III died in 1803. d'Este as the last male member of the family. His daughter Maria Beatrice brought the inheritance to the Habsburgs and became the founder of the Austria-Este line .

Ercole III. was buried in the cathedral of Modena , his tomb was created by the sculptor Giuseppe Pisani in 1808.