Islam in the Netherlands

Mosque in The Hague

The history of Islam in the Netherlands begins in the early 17th century when the United Netherlands signed a free trade agreement with Morocco - the first official agreement between a European country and a non-Christian nation. In the 19th century, the Netherlands saw sporadic Muslim immigration from the Dutch East Indies when this Southeast Asian region was a Dutch colony . The economic growth between 1960 and 1973 eventually led the Dutch government to recruit large numbers of migrant workers, mainly from Turkey and Morocco, and migration continued thereafter in the form of family reunions and asylum applications from people from unstable Muslim countries. 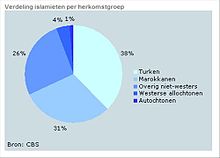 Origin of the Dutch Muslims

Figures from 2009 show that there are currently around 825,000 Muslims in the Netherlands, including 327,000 Moroccans and 325,000 Turks. Most of them live in one of the four major cities in the country: Amsterdam , Rotterdam , The Hague and Utrecht . 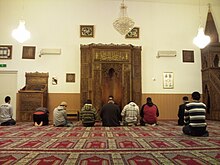 Dutch Muslims at prayer in the Krekelstraat mosque in Nijmegen

The Mevlana Mosque in Rotterdam

In the early 17th century a delegation from the United Netherlands visited Morocco to discuss a common alliance against Spain and the corsairs . Sultan Zaydan an Nasr (also Zaidan el-Nasir or Zidan Abu Maali ) appointed Samuel Pallache as his envoy, and in 1608 Pallache met with Governor Moritz of Orange and the States General in The Hague.

On December 24, 1610, both countries signed a treaty recognizing free trade between the Netherlands and Morocco and allowing the sultan to buy ships, weapons and ammunition from the Dutch. It was one of the first official treaties between a European and a non-Christian state after the Franco-Ottoman alliance of 1536. As a result, Moroccan envoys and merchants came repeatedly to the Netherlands.

In the 17th century, some of the Dutch corsairs who had already participated in the war of independence against Spain converted to Islam and settled permanently in North Africa (well-known examples are Simon de Danser , Süleyman Reis , Jan Janszoon ).

In the 19th century, the Netherlands administered a group of islands that later became the state of Indonesia - a predominantly Muslim country with the world's largest Muslim population. The first Muslims to settle in the Netherlands fled from the Indonesian War of Independence , which lasted from 1945 to 1949.

Immigration in the 20th Century

The Muslim population in the Netherlands is of different origins. During the 1960s and 1970s, the country needed more workers. The state entered into recruitment agreements with countries such as Turkey and Morocco, and people from there were allowed to reside temporarily in the Netherlands (a smaller number of Muslim migrants at the time were from Tunisia and Algeria ). In 1973 about 22,000 Moroccans lived in the country.

Official labor migration ended in 1973, but the number of Moroccans and Turks increased steadily, as the immigrants later brought their families into the country, benefiting from family reunification laws .

Finally, a number of Surinamese Muslims came to the Netherlands before and after Suriname gained independence in 1975, and in the 1980s, and especially since the 1990s, Muslims came to the country as refugees and asylum seekers, mainly from Bosnia and Herzegovina , Somalia , Iran , and Pakistan Afghanistan . 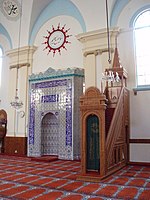 Minbar in the Aksa Mosque in The Hague

According to the CBS , the Dutch Statistical Office, 5% of the country's population are Muslim (October 24, 2007). Previous statistics presented by the CBS showed a larger number, but that information was based solely on ethnicity and not on religious belief.

According to a study by the University of Amsterdam , 53,000 Dutch Muslims describe themselves as strictly Orthodox , of which 24,000 were of Moroccan and 12,000 of Turkish descent.

The number of Twelve Shiites holding a Dutch passport on January 1, 2005 was 108,728, including Iraqis, Afghans and Iranians.

Around 12,000 autochthonous Dutch had converted to Islam by 2007. It is estimated that 500 Dutch people convert to Islam annually. Dutch converts are often confronted with linguistic problems: in the mosque they often do not understand the content of the sermon , as it is often given in Arabic or Turkish .

Window painting in the Islamic primary school Hidaya in Nijmegen

There are more than 430 registered mosques in the Netherlands, including over 220 Turkish, 140 Moroccan and 50 Surinamese. There are Islamic bookshops and publishers as well as Muslim women's and youth organizations. Under the freedom of education law applicable in the Netherlands, there are around 45 Islamic primary schools and two universities of this type (the Islamitische Scholengemeenschap Ibn Ghaldoun in Rotterdam and the Islamitisch College Amsterdam ). An Islamic radio station , the Nederlandse Moslim Omroep (NMO, Dutch radio for Muslims) , has also existed since the end of the 2000s .

Politically, around two thirds of Turks and Moroccans feel “predominantly connected with members of their own ethnic group”; voter turnout and general political participation among them is relatively low. Statistics show that Dutch Turks predominantly (90%) vote for politicians of Turkish origin; among Moroccans, only half as many vote for politicians with their own ethnic background. Despite the lack of political participation by the majority of Dutch Muslims, there are always people of Muslim origin in parliament; one of the first was Mohamed Rabbae in 1994 . After the 2003 elections there were at least 10 MPs with a Muslim background in the Dutch parliament : Nebahat Albayrak ( PvdA ), Coşkun Çörüz ( CDA ), Fatma Koşer Kaya ( D66 ) and Fadime Örgü ( VVD ) are of Turkish origin; Khadija Arib (PvdA), Naïma Azough and Ali Lazrak ( GL ) are of Moroccan descent. Also in the second chamber were Farah Karimi (GL), Nirmala Rambocus (CDA), and Ayaan Hirsi Ali (VVD). Since then there have always been new parliamentarians with a Muslim background, such as Ahmed Marcouch , Samira Bouchibti, Nihat Eski and Nevin Özütok. In 2007 formed the fourth cabinet of Prime Minister Balkenende were with Ahmed Aboutaleb first two Muslims and Nebahat Albayrak, Office of the Secretary of State.

Aboutaleb has been the mayor of Rotterdam since 2008, making the city the first major Western European city to have a Muslim mayor.

There are currently two Islamic political parties in the Netherlands, the Islam Democrats and the Nederlandse Moslim Partij ; but neither have so far achieved any noteworthy election results. 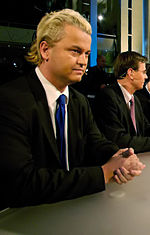 In the Netherlands there are many critical positions on Islam, including open hostility towards Islam ; Well-known critics and opponents of Islam include politicians such as Geert Wilders ( PVV ), Pim Fortuyn ( LPF ), who was murdered in 2002 , Ayaan Hirsi Ali (VVD) and Ehsan Jami (PVV), and scientists such as Afshin Ellian . Hirsi Ali has received death threats from Islamist circles since 2002, and Wilders has also received such threats regularly; Jami was violently attacked by Muslims several times.

The murder of director Theo van Gogh by Mohammed Bouyeri , a Moroccan-Dutch Islamist terrorist, on November 2, 2004, as well as the arrest of the Hofstad group on charges of terrorism, sparked a multitude of discussions about Islam and its place raised in Dutch society. A ban on the burqa was discussed in the cabinet. After the murder of Van Gogh, a number of websites emerged praising the act and making further death threats against other people. At the same time, four arson attacks were carried out on mosques over the weekend after the murder, and a significant number of overt retaliations followed. On November 8th, Christian churches were targeted in return. According to a report by the Anne Frank Stichting (Anne Frank Foundation) and the University of Leiden there were a total of 174 violent incidents in November 2004; mosques were targeted 47 times and churches 13 times.

Between November 23, 2004 and March 13, 2005, the Korps landelijke politiediensten (KLPD), the Dutch national police, recorded 31 cases of violence against mosques and Islamic schools. The case that attracted the most attention was the arson attack that resulted in the destruction of a Muslim primary school in Uden in December 2004 . The period of increased tension between the Dutch and the Muslim community was also evidenced by confrontations between the so-called 'Lonsdale youth' (Dutch youth who prefer to wear Lonsdale clothing) and Turkish and Moroccan youth in rural towns such as Venray .

In 2006, then Justice Minister Piet Hein Donner caused a wave of protests when he proposed that Sharia , i.e. Islamic law, be accepted in the Netherlands in a constitutional manner. “For me it is certain that if two thirds of all Dutch people want to introduce Sharia tomorrow, then this possibility must be given. Could it be thwarted legally? It would also be a scandal to say 'that is not allowed!'. The majority counts. That is the essence of democracy. ”This statement was categorically rejected by parties from all political backgrounds, as well as by a Muslim leader.

Wilders and the Muslims

Geert Wilders, regarded by many as a right-wing populist , repeatedly became the focus of public interest with his polarizing views on Islam in the Netherlands and Europe , as well as the reactions to it, and thus a central figure in the debate about the role of Islam in the western world. Wilders calls for an immigration stop for people from Muslim countries as a matter of priority ; Other demands on his part were a tax on headscarves , the closure of Muslim schools in the Netherlands and a ban on the Koran. The short film Fitna , published by him in March 2008 , in which a collage of quotes from Sura and scenes of Islamist violence can be seen, aroused strong international criticism. In the Netherlands itself, reactions, including from the Muslim side, were moderate. Two years later, the Lebanese-Australian hate preacher Feiz Mohammed , as it became known in September 2010, apparently called for the beheading of Wilder in an internet conference because he had "mocked Islam". From October 4th, Wilders was on trial in Amsterdam for incitement to hatred on the basis of his anti-Islamic statements (including Islam was “fascist”, Prophet Mohammed a “barbarian”) . There he invoked the right to freedom of expression. The court, on the other hand, found Wilder's statements to be a “punishable incitement to hatred of followers of a religion”. In October 2010, Taliban leader Sabjullah Mujahed threatened the Dutch government: should it implement the anti-Islamic demands of Wilders, the Netherlands “will definitely become a target for jihadists ”.