The Mahmud Mosque in Zurich opened in 1963 , the first mosque in Switzerland

The history of Islam in today's Switzerland is older than the Confederation itself. It begins in the 10th century when Muslims temporarily reached the stronghold or present-day Switzerland.

Arabs advancing from Fraxinetum ( Provence ) in the south of France - also known as Saracens - penetrated as far as Geneva in 939 and in the following years found their way into Valais , parts of Graubünden and eastern Switzerland . This was made possible by a peace that Hugo , Dux Francorum, King of Lombardy and de facto ruler of Provence concluded with the Saracens in 941 and formally gave them the Alpine passes. With this he secured the support of Abd ar-Rahman , the caliph of Córdoba and won a possible ally against the threat from the north, where King Otto I was pushing south. Between 952 and 960, after the battle of Orbe VD , the Arabs ruled large parts of the south and west of Switzerland, including the Great St. Bernhard Pass, and advanced like a raid to St. Gallen in the north- east and Pontresina in the south-east . The Arab raids (“ raids ”) ended with the capture of the Fraxinetum bridgehead by Provencial troops around 975. Etymological derivations of some Valais place names from Arabic names are currently rejected by linguistic research. Traces of settlement of the Saracens in the Swiss Alpine region have not been discovered either.

It was not until 1799 that larger groups of Muslims - this time Tatars - moved over the Alpine passes for a short time. As part of the Russian armies of Suvorov and Rimsky-Korsakov , they fought against French revolutionary troops in the Second Battle of Zurich .

In 1935, an Egyptian- inspired Congress of European Muslims took place in Switzerland . In 1945 the first Turks came to Switzerland to study at Swiss universities - partly with the support of the Turkish state (including the later Minister Tahsin Önalp , who did his doctorate at ETH Zurich ). Most returned to Turkey after completing their studies. In 1946, a group of Ahmadiyya missionaries came to the country and built the Mahmud Mosque in Zurich in 1963, the first mosque in Switzerland. In 1978 the Geneva mosque was opened.

From the beginning of the 1960s to the mid-1970s, Turkish guest workers came and a little later their families (see also people of Turkish origin in Switzerland ). At the same time, guest workers from the Islamic parts of Yugoslavia immigrated to Switzerland. Therefore, during the Bosnian War and the Kosovo War, many people from these regions fled to their relatives. Islam in German-speaking Central Switzerland is therefore mainly Bosnian, Albanian (see Albanians in Switzerland ) and Turkish (see also Pakistanis in Switzerland ), while Muslims of Arab origin are more strongly represented in French- speaking Switzerland . The largest proportion of the Muslim population can be found in French-speaking western Switzerland and the smallest in southern Italy .

The proportion of Muslims in the total population over 15 years of age varies greatly from one canton to another, ranging from more than 8% in Basel-Stadt to less than 2% in Graubünden in 2017. Generally speaking, there are more Muslims in German-speaking Switzerland and in more densely populated cantons than in Latin Switzerland and more rural cantons (with the exception of the canton of Glarus, where almost 8% of the population are Muslims). 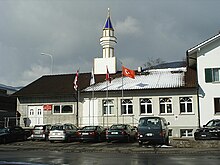 Mosque in Wangen near Olten , with a minaret built in 2009

Legal disputes over the construction of mosques or mosque extensions ( minarets ) have influenced coexistence with Muslims in Switzerland since 2006. This involved the erection of minarets in the existing Muslim prayer rooms in three communities ( Wangen bei Olten , Langenthal and Wil SG ) as well as the plan to build an Islamic Center in Bern.

Since there are strong differences among Muslims due to their origin and culture, there are still many different associations and groups that maintain relatively little contact with one another. These groups usually meet in so-called backyard mosques . However, your organization is constantly improving.

The Ahmadiyya Movement of Islam in Switzerland (National Organization of the Ahmadiyya Muslim Community ) has around 700 members and its emir (president) is Walid Tariq Tarnutzer .