Filippo Brunelleschi, looking up at the dome of the cathedral, statue in the Piazza del Duomo in Florence

Filippo Brunelleschi (* 1377 in Florence ; † April 15, 1446 ibid) was one of the leading Italian architects and sculptors of the early Renaissance . His main work was the construction of the dome of the Cathedral of Florence (Santa Maria del Fiore).

As the son of a wealthy Florentine notary , Brunelleschi received a good general education. He trained as a goldsmith , then worked as a sculptor and in 1401 took part in the competition for the second bronze door of the Florentine Baptistery with his bronze sacrifice of Isaac .

Work as an architect and builder

In 1402 he traveled to Rome for the first time to study the ancient builders. He was also interested in the sculptures. Brunelleschi then dealt intensively with architecture over the next few years.

When the contract to build the gates of the baptistery was to be awarded in Florence , Brunelleschi submitted his first design. Brunelleschi's design was rejected and the contract went to a competitor: Lorenzo Ghiberti , art theorist, painter and sculptor. Ghiberti and Brunelleschi later worked on projects together.

In 1436 the dome of the cathedral, which was built as an octagonal double-shell structure, was completed. Brunelleschi used a completely new concept. The style of the dome still suggests Gothic , but the decisive factor for the shape was the construction. Structurally, the dome had exceeded the Gothic limits and reached the Renaissance . Filippo Brunelleschi took on the next building contracts during the planning and work on the dome in Florence. 1418–1428 construction of the church of San Lorenzo , 1421–1455 the foundling house and the Pazzi chapel . All of these buildings are characterized by their geometric architectural style, in which the elements that were used for decoration are omitted.

The buildings of ancient Rome and the Tuscan Romanesque were the models, and Brunelleschi attached great importance to technical-functional forms. Filippo Brunelleschi's style found many followers in Florence who imitated his style. Brunelleschi later went on another study trip to Rome. He later incorporated the knowledge he gained into other buildings, mainly for churches. The church of Santa Maria degli Angeli, built in 1434, has a central octagonal space surrounded by chapels. Santa Maria degli Angeli is considered the first Renaissance church. In 1436 construction began on the Church of Santo Spirito . Brunelleschi provided the church with the plan of a basilica in the shape of a Latin cross.

Discovery of the geometrically constructible perspective

Because of his panels of the Piazza S. Giovanni and the Piazza della Signoria , painted in perspective in 1410 , Brunelleschi is also considered the discoverer of geometrically constructible perspective and its laws, with which he directly influenced his fellow Florentine artist Masaccio .

In the period that followed, the perspective construction became an instrument for controlling the relationship between the depth of the space and the surroundings. It is no coincidence that technological research and the elaboration of a new metric-proportional system on the basis of classical orders are topics that Brunelleschi explores at the same time as scientific experimentation.

Work as an inventor and engineer 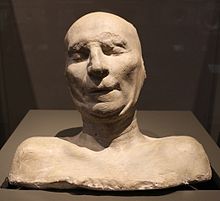 Brunelleschi was also an engineer and inventor of machines and apparatus. During the construction of the dome on the Florentine Cathedral, for example, he invented a change gear for the large wooden crane that transported the building materials upwards, which made it unnecessary to re-clamp workhorses. Until then, its lifting mechanism was driven by a gopel , whereby the animals always had to be changed in a time-consuming manner to move the basket up and down. This enabled Brunelleschi to significantly reduce the construction time on the dome.

In 1421, Brunelleschi was granted the sole right to manufacture a ship with a lifting device for transporting marble for three years. This gave him the first patent for an industrial invention.

Filippo Brunelleschi died on April 15, 1446 in Florence and was buried in the church of Santa Maria del Fiore . His grave, which remained unknown for centuries, was rediscovered in July 1972.