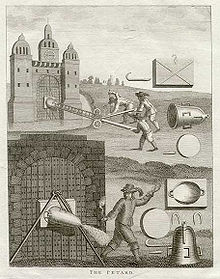 British Army petards with madrill board and bracing bars

A petard ( fr. Pétarde "Knallerei", "Rknatter") is a military explosive weapon used to force open doors or gates at fortifications , to outline palisades and to separate chains, for example between the tree trunks of a barrier. Petards were also used to blow up ship hulls. They were developed in the 16th century and replaced by more modern weapons from the 19th century.

Application examples of a petard

Petards usually consisted of a massive cup-shaped container with a hemispherical bottom made of bronze or wrought iron. However, there were also variants made of wood, which were tightly wrapped with rope for reinforcement and covered with leather or rawhide on the outside. The latter variant, whose structure is very similar to that of the leather cannons , was probably only suitable for one-time use.

In construction, petards resemble very short runs in mortar . The cargo hold was filled with fine, fast-burning black powder to just below the muzzle and sealed with a thin wooden or lead mirror , hemp and wax. The petard was then attached directly to the muzzle with three to four screws to the object to be broken through or strapped to a madrill board and hung in front of it. If the curtain was not possible, this could also be ajar and counter-supported with bracing bars. The charge was ignited through an ignition hole in the bottom of the vessel using a fuse or later with a wheel lock mechanism using a pull cord. Due to the small distance between the muzzle and the object to be broken, the explosion pressure (gas pressure) of the deflagrant (which burns off explosively at subsonic speed) can act directly on the target. The result was a hole that could be widened or the door shattered. If a matrice board was placed in front of the petard, an elongated board on which a long triangular iron was fastened across the front, this device could outline palisades along the appropriate length. The more stable the abutment of the petard could be, the greater its impact.

Petardier was the name for the person who was entrusted and familiar with the use of the petard. The first known use of a petard took place in Cologne and Bonn in 1584, when the city gates were blown open with it. In the Long Turkish War , the imperial director of the artillery Johann von Pernstein successfully deployed a petard he had developed. This construction found its way into military history as "Pernstein's petard" (Czech pernštejnska petarda ). The personnel losses among petardiers were relatively high, as they had to operate directly on the opposing defense and barrier systems, which were often unprotected within the range of the defensive weapons.