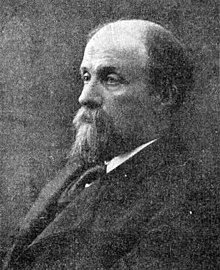 Juhani Aho came from a pietistic family in which reading secular literature was not tolerated. His father Henrik Gustaf Theodor Brofeldt was provost in Lapinlahti; his mother was Karolina Fredrika Emelie Snellman. Aho studied history and literature in Helsinki from 1880 to 1884. During his studies he worked as a freelancer for various Finnish newspapers. He was also the co-founder of the Päivälehti newspaper . As a result, he was u. a. to one of the important personalities in Young Finland , a group that formulated new thoughts on society, art and morality in Finland in the 1880s. Invitations and trips to France and Russia followed.

Juhani Aho passed away at the age of 59.

"Aho has a tender eye for the despised individualities of life, which means that he can feel sympathy not only for the new that is coming, but also for the old that is going."

According to Hans Marquardt , the attraction of his works is Ahos' “deep psychological empathy”.