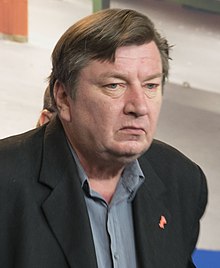 Aki Kaurismäki studied literature and communication at the University of Tampere . In addition to various temporary jobs, for example as a postman or in catering, he was the editor of a university film magazine. He also wrote film reviews for Filmihullu magazine from 1979 to 1984 . The first script followed in 1980 for the medium-length film The Liar (Valehtelija) , directed by his brother Mika .

Kaurismäki's films often address the fate of social outsiders in urban centers such as Helsinki. They are not only known for their economical dialogues, but also for their bizarre laconic humor. Kaurismäki regularly works with a solid base of friendly actors and musicians who have also shaped his films stylistically: Matti Pellonpää , Kati Outinen , Kari Väänänen and Sakke Järvenpää . As a reminiscence of Alfred Hitchcock , he occasionally made cameo appearances in his films , which Hitchcock also used to do.

In Germany, his films were shown for the first time in 1986 at the Grenzland-Filmtage film festival in Selb . Aki Kaurismäki personally screened the films Der Lügner, Calamari Union and Crime and Punishment . During the festival he wrote the script for his film Schatten im Paradies , which he presented again in person in 1988 at the Grenzland Film Festival in Selb. This film brought him his international breakthrough. A large part of the film music came from the band Nardis from Erlangen, which Kaurismäki had met in 1986 at the Grenzland-Filmtage. The Finnish director became known to the broader German audience through his participation in the Berlinale in 1988 . Kaurismäki caused a sensation in autumn 2006 when he refused to accept his film Lights of the Suburbs as an official Finnish entry for an Oscar nomination in the category of Best Foreign Language Film , even though the drama was unanimously selected by the Finnish Chamber of Film. Kaurismäki explained his rejection with his represented for years critical stance against the Iraq war the United States .

Together with his brother Mika Kaurismäki he founded the Midnight Sun Film Festival in Lapland Sodankylä and the rental company Villealfa. The name goes back to the character Ville Alfa, the protagonist in the film The Liar . It is also an anagram of Alphaville , a film by Jean-Luc Godard .

In 1989, Kaurismäki emigrated to Portugal with his wife because "there is no longer any place in Helsinki where he can post his camera".

Rainer Gansera , who spoke to the “chief melancholy of European auteur cinema” in Hof for epd Film magazine in 2006, was personally impressed by his appearance and described atmospherically:

“Well-chilled white wine, cigarettes, one after the other, soft voice, almost whispering, as if - like a hypnotist - he wanted to concentrate his counterpart entirely on the conjuring voice. No expressive gestures whatsoever. [His films] are lurching atmospheric journeys: through highs and lows, through abysses (only gradually one notices that it is above all the abysses of self-doubt) and enlightenments, primed by sharp-edged, dry humor. "

Kaurismäki claims to have seen Bresson , Ozu and Godard as personal models , but the training at the film schools in his country did not give him much positive. At the end of 2006, Pandora released 14 feature films and five short films (with digitally restored images) in four boxes as the “Aki Kaurismäki DVD Collection”.

In 2011, after five years, Kaurismäki completed a feature film with Le Havre , which once again earned him an invitation to the competition at the Cannes Film Festival . The film, shot in France, is about a shoe shiner from the port city of the same name who takes care of an illegal refugee child from Africa. Le Havre won the FIPRESCI Prize in Cannes .

For the feature film The Other Side of Hope , Kaurismäki received an invitation to compete at the 67th Berlin International Film Festival in 2017 . The film is set in Helsinki and tells of an encounter between an elderly Finnish sales representative (played by Sakari Kuosmanen ) and a young Syrian refugee ( Sherwan Haji ). The film was released in Finnish cinemas on February 3, 2017.